The DFM E-Group Webstore comprises of newly published, fresh, entertaining, captivating and hot novels/books in hot demand. We are networked with more than 30 publishers who publish books written by over 60 Authors from more than 15 different countries. We take our time to select the most enticing and interesting by paying 25 students to read, give criticism and scrutinize, before we enlist them for sale on our site. Books ranging from romance, thriller, horror, sexuality, spirituality, religion, suspense, campus Life and many more niches are up for sale. For more details and purchase of any of our books visit our WEBSTORE.
InfoBarrel is a writing platform for non-fiction, reference-based, informative content. Opinions expressed by InfoBarrel writers are their own.
InfoBarrel > Lifestyle > Religion & Spirituality

Agape-God's Unrelenting Efforts In Bringing Man Back To His Likeness

From the previous episode, we understood what an Image is and how important it is to not just have but protect and preserve it. We also learnt about likeness and its importance as it is significant in relationships or maximum interactions between two alike subjects.

We then found out the Image of God which is defined by His Holiness and His nature as a Consuming fire. What can we say about this and how is it significant in His Love exhibition to us?

Gen 1: 26: "Then God said, "Let us make man in our image, in our likeness, and let them rule over the fish of the sea and the birds of the air, over the livestock, over all the earth, and over all the creatures that move along the ground."

He said, let us make man in our image and likeness... That is to say, when Adam was created, he was blameless, righteous, pure without sin, perfect and Holy. Adam took after the Image of God and with a similar image to God, He became alike with him.

If we study the whole of Genesis 1, we will realize that the other creation of God came as a result of His spoken words. "Let there be light....... and there was light" But when it came to creating Man, he summoned his counsel and molded Man out of His own creativity to be an exact Image of Him and also alike with Him. For a better understanding of this, we should consider the next Bible passage:

Genesis 5: 3: "When Adam had lived 130 years, he had a son in his own likeness, in his own image; and he named him Seth." It is recorded that Adam had a son in his own Image and his own likeness. What can we get from here? Seth is the exact representation of Adam and so alike with him. In other words, we can confidently say, we are the likeness of our parents and in most cases their Image. And since God created Man in His likeness, it means, you see God by seeing yourself. And no wonder the Bible states that we are gods...

Why are we considered to be gods? Because we are made in likeness of the Most High God.. He creates and that is why we manufacture, discover and invent new ideas, He dominates and that is why He has given us the Earth to dominate and not even the strongest of the strongest of Animals physically can overturn that. All these features are parallel to the one we are alike with (God Himself).

The Fall of Man

We have seen that Adam had the Image of God not until he fell. After he sinned against God, he (Adam) totally lost that Image of Purity, righteousness and Holiness. Man from then on became an imperfect being which is a total deviation from God's Image. But we are still alike with God.

Genesis 3: 8-9: "Then the man and his wife heard the sound of the Lord God as he was walking in the garden in the cool of the day, and they hid from the Lord God among the trees of the garden. But the Lord God called to the man, “Where are you?"

From that passage, we can deduce a special communion God had with Adam and Eve. He comes around for them to interact and that was exactly His intention for man. God created a being with same Image as His and His likeness, His intention was to interact with this being and have a very good and Mutual relationship with Him.

But after the fall, and total lost of the Image of God, God Himself had to find a way to bring back this relationship, this communion with Man. Man can never be perfect again, but since God is perfect, blameless, Holy and without spot or stain, there has to be some sort of a cleansing mechanism in order to establish that connection. And this cleansing comes with the shedding of blood.

Hebrews 9: 22: "In fact, the law requires that nearly everything be cleansed with blood, and without the shedding of blood there is no forgiveness".

This led to the numerous sacrifices and instructions of sacrifices recorded in the books of Leviticus, Numbers and Deuteronomy. But was this enough?

Man now has an Image of which all other Men coming from him will have. The Adamic Image and sinful Nature. Man's Nature initially was pure, holy and blameless, but after his fall, he acquired a new nature of sin in Him and there is nothing he can do about it. Even Paul stated this:

That is who we are and for this reason, sacrificing Animals isn't enough. We sacrifice and cleanse temporarily, then go back to sinning again. This in some cases make us do things which infuriate God and then He strikes "as a consuming fire" There are lots of stories from the Bible which showed the Image of God as a consuming fire to man. The story of Sodom and Gomorrah is a good example and even Moses, God's faithful Servant, there was a time the Lord sort to Kill him (Gen 4:8-26).. Here is a striking example of God's Anger:

2 Samuel 6: 6-8 "But when they arrived at the threshing floor of Nacon, the oxen stumbled, and Uzzah reached out his hand and steadied the Ark of God.Then the Lord’s anger was aroused against Uzzah, and God struck him dead because of this.So Uzzah died right there beside the Ark of God. David was angry because the Lord’s anger had burst out against Uzzah. He named that place Perez-uzzah (which means “to burst out against Uzzah”), as it is still called today." Isn't this ridiculous? But this is how consuming God can be.

We can see that the personal or one on one interaction or communion which is God's intention for man became very difficult after the fall of man. His wholeness, his completeness, his perfection cannot just beget sin and since sin is now our new Nature, He needed to do something. And what is that thing which needs to be done?

Were these needs met? Let's find out in the next episode. 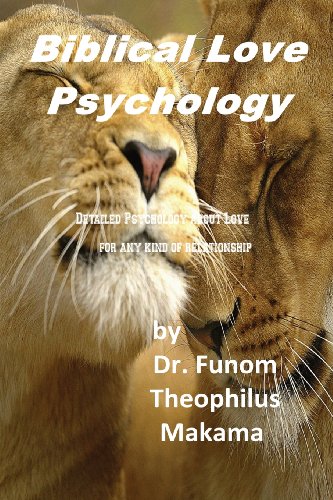 Biblical Love Psychology Amazon Price: $12.45 Buy Now(price as of Jul 18, 2016)
Love as an issue or topic is one of the most talked, discussed, appreciated, feared and controversial in our contemporary world of today. But is love really controversial? We will find out. Is love wicked as some people say? Does love hurt? Can we fall in love with more than one person? Can or should we love Material things? What about Loving Animals? Is love really blind? If it is, can I fall in love with my eyes Open? Sex and falling in Love, do they go hand in hand? All these questions would be answered one way or the other, directly or indirectly in this Book. Biblical Love Psychology is the product of the understanding of the word of God from the Bible and as well the practical application of its Psychology; hence it is easily applicable and understandable irrespective of your belief. Lots of emphasis hits on Love itself, breaking it down into its stages, forms and levels and trying to differentiate these various stages of Love as distinct units. Take for instance, Love can be viewed in two categories, the horizontal (Man to man) and the vertical (God to man) and we will understand that The horizontal (Man to Man) exists with an initial step: THE ATTRACTION! But the vertical has no attraction in its initial phase because God loved us while we were yet sinners, doomed to die. This attraction could be blood (blood relations), romance (eros) or compatibility in likeness (Phileo-friendship). This Book has explained explicitly the significance of the attraction, independent of Love (despite going hand in hand). It did not stop there, it is vivid in elaborating Love itself which is a deeper level and a soul to soul connect which is in by no means same as the initial step (the attraction). Despite all these wonderful revelations about Love, why do we have failed relationships today? Why are marriages not lasting up to 30 years as it used to be? Why do parents disown their children? Why are relationships so shallow, insignificant and treated like high-school courses where they come and go? A typical or an average young lady in her mid-20s should have experienced a minimum of 7 failed relationships in her life, is this supposed to be so? What about Love application to other phenomena such as material things, Money, Animals, what can we say about this? Despite the vertical kind of Love (God to man) being the AGAPE Love, does that mean man cannot exhibit this Agape? When a person adopts a child, this has definitely by-passed any form of attraction, because despite not being their blood (the attraction), the person adopts and loves this child, can we consider this Agape? All these questions will be thoroughly answered and as well some doctrinal controversies such as: the doctrine of Hell (is it necessary since God loved us without any form of attraction?), the doctrine of the trinity, and the justification of disowning a child from the fact there is Hell, despite (God) showing us such immense love and many more issues. So, as much as this basic psychological issue of Love is coming from the foundation of the Bible, it is applicable to everyone. I may not believe in Buddhism, but that doesn't stop me from enjoying any Buddhist Movie and even learn from it. There are lots of principles we can apply from this book into our love-relationships irrespective of our beliefs, so try to read it. On a final note, we should be cautioned that this Book is not a relationship manual. This is far from it. This book is about Love and solely about Love, of which if we understand its basic principles can be applied to any form of relationships. Psychological tools like the Love graph, the perfect square formula are used to explicitly elaborate Love Psychology. Also, science is brought into the picture for us, to a large extent use critical thinking for the justification of the existence of God. If somewhere in our subconscious we believe in His existence, then we will appreciate the Agape Love better. ENJOY READING BIBLICAL LOVE PSYCHOLOGY!
Next >> How to Pray: A Beginner's Guide