All About The United States Lincoln Cent

The worlds most popular collectible

Credit: DreamakerThe year 1909 welcomed a new one cent design to the mints history of small cents.

Abe Lincoln proudly adorned the face of the new issue. The reverse showed wheat stalks surrounding the words ONE CENT and UNITED STATES OF AMERICA. At the apex of the reverse are the words E pluribus Unum.

The first year of issue also carried the initials vdb for Victor David Brenner, the coins designer. These three letters are found on the bottom of the reverse between the two wheat stalk stems. This first year is the only year with these initials. It's also not a complete year run. The initials do not appear on all 1909 cents and the ones that carry these initials also carry a premium with collectors.

There are also several other varieties for this first year issue. numismatist aggressively seek out any 1909vdb coins that also carry an s mint mark. Today an uncirculated example of a 1909-s VDB cent can run into the thousands of dollars.

collectors are now having a difficult time filling many semi key dates in uncirculated condition. Even common dates are getting harder to find. The Lincoln cent has become the worlds most popular collectible. By far the demand is now outweighing the supply of high grade examples.

One of the reasons for the jump in demand is the arrival of the internet and many different auction sites that now offer coins for sale. Ebay has brought a global collector base to market. Coins are now being purchased by investors as well as collectors and the higher priced examples are placed in portfolios.

This wheat stalk reverse continues unchanged until 1959 and the introduction of the Lincoln Memorial reverse. This marked the end of an era and the beginning of a massive collector base for this coin.

Some of the key dates for the wheat stalk cents include the 1914-D cent which was minted in Denver Colorado and has a very limited mintage. Semi keys are the 1931-s from the San Fransisco mint and the 1924-D also from Denver. these dates are rapidly becoming high priced coins in any condition.

Credit: DreamakerIn 1959 the easily recognized wheat stalks where no more and this Lincoln memorial cent was introduced. The reverse endured through the years and was eventually replaced in the year 2010 with a complete series of new reverses. They continue to be released and now the word is that soon the cent may be discontinued all together.

Collectors will surely increase if this occurs. Complete sets of Lincoln cents are easily sold to many bidders and auctions realize new highs all the time.

This era for the Lincoln cents carries many high priced proof coins. Some collectors will try to get all the proof issues as well as the circulation issues. This can become quite costly.

We can now add the fact that all coins minted prior to the second half of 1982 are worth almost triple their face value in scrap copper. At this time the melting of these coins is still illegal. There are many people trying to change this law and if it happens the coins will shoot up in value over night due to the fact that millions of them will immediately be melted for profit.

This will allow a great opportunity for the savvy investor to grab up some key dates before this happens. Concentrating on the semi keys can be relatively inexpensive for the potential. A great profit could be realized almost over night. 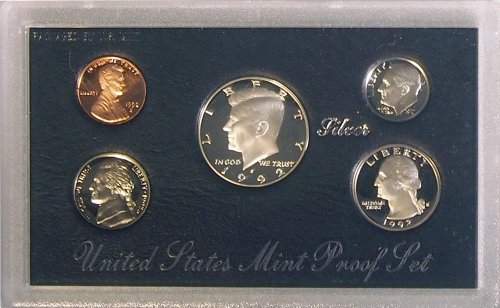 1992 Silver U.S. Proof Set in Original Government Packaging Amazon Price: Buy Now(price as of Jan 1, 2016)
Next >> How to Become a Certified Skydiver