Everyone loves a good explosion. When professional demolition experts bring down large buildings, towers, and bridges it usually draws a crowd.  Structures that took years to build can be reduced to rubble in a few seconds, without harming adjacent properties.

#10 in the countdown, an airport control tower that was no longer needed

August 5, 2006 the Atlanta Airport took down the FAA tower after it was replaced by the tallest airport control tower in the United States (3rd tallest in the world), with a height of over 398 feet (121 m). The construction of a  fifth runway prompted  the replacement because the old tower could not see the entire length of the runway.

The demolition created a giant plume of smoke that could be seen from miles away and the blast could be heard in downtown Atlanta offices nine miles away.

Could not find much info on this Chinese dam, but they sure busted it up good with TNT.

On Sunday 22 August 2010, a Cape Town landmark, the Athlone Towers were demolished. The event caused great excitement and drew record crowds on a dreary winter's day. Media, camera crews, photographers and onlookers were caught off guard when the implosion detonated 4 minutes before the scheduled time.  The cooling towers were part of a coal-fired generating station that was rendered obsolete when they realized it was cheaper to burn coal at the mine and transmit the power than to ship the coal to Cape Town to burn.  The failure of reinforcing rings on one tower hastened the implosion decision.

At 7:00 am on May 16, 2006, demolition experts demolished the 499-foot-tall (152 m) cooling tower at the Trojan Nuclear Plant on Oregon.  Equivalent to a 50 story building, the cooling tower was visible from I-5 and a major landmark.

The Trojan Nucular Plant was beset by design and construction flaws. It also faced significant political pressure from Oregon residents who are decidedly anti-nuclear  These factors lead to the shut down and destruction of the power plant just 16 years after opening and nearly 20 years before the expected initial designed life span.

Original construction of Trojan commenced in 1970 with completion in late 1975. It cost $450 million to build the nuclear power plant and another $230 million to dismantle it, including continuing cost for storage of spent nuclear fuel.

This 1,201 foot-5 inch tall structural steel tower is the tallest structure ever to be demolished using explosives.

It may not look like much in the video - no flying concrete or dust like most of the explosions here, but at over 1200 ft tall, the Omega Radio Tower is an impressive demolition. The tallest structure in South America was destroyed on June 23, 1998.

The OMEGA Navigation System was the first truly global radio navigation system for aircraft, operated by the United States in cooperation with six partner nations. Omega stations used very extensive antennas in order to transmit their extremely low frequencies. Specifically, they used grounded or insulated guyed masts with umbrella antennas, or wire-spans across fjords. Omega antennas were built all along the world and they were the tallest constructions on the continent where they stood or still stand. The Global Positioning System rendered OMEGA obsolete in 1997 and all stations ceased operation.

Damaged by Hurricane Katrina, the Armed Forces Building was imploded to make way for it's replacement

#4 is the Sunshine Skyway Bridge

Removal of the parallel spans and causeways of the Florida Department of Transportation's Sunshine Skyway Bridge over Tampa Bay between Bradenton and St. Petersburg was the largest, most complex bridge demolition ever completed in  Florida.

A new cable suspension bridge with a much wider channel span was built due to  with the old channel peirs in one of the most heavily trafficked shipping lanes in the Gulf of Mexico region.  The original Sunshine Skyway Bridge was the site of a number of collisions of oceangoing vessels with the bridge, including the collision of the US Coast Guard Cutter Blackthorn and outbound freighter Capricorn in 1980 which claimed 23 Coast Guardsmen's lives.  A structural collapse caused by a collision with the bridge support by the freighter Summit Venture in 1980 killed 35 people and ultimately ended the bridge spans' useful life.

Controlled Demolition Incorporated (CDI) (who also took down the King Dome and the really tall Omega Radio Tower also on the list) demolished 9,000 tons of steel in 8 deck trusses and 4 approach thru-trusses and towers. Working up to 235 above the water with wind and weather issues to overcome, taking down the Sunshine Skyway Bridge was a lot of work.Steel removal was followed by the drilling and flawless fragmentation of 100 pile bents, 48 hammerhead piers, 8 shaft bents and 4 massive channel piers. The concrete were fragmented to a 3 foot elevation, without need for secondary blasting and in full compliance with Department of the Environment and Fish & Wildlife regulations that protect endangered species in the area.

The Bob Graham Sunshine Skyway Bridge is a bridge spanning Tampa Bay, Florida, with a cable-stayed main span, and a total length of 21,877 feet (4.1 miles or approximately 6.67 km).[5] It is part of I-275 (SR 93) and US 19 (SR 55), connecting St. Petersburg in Pinellas County and Terra Ceia in Manatee County, Florida, passing through Hillsborough County waters. 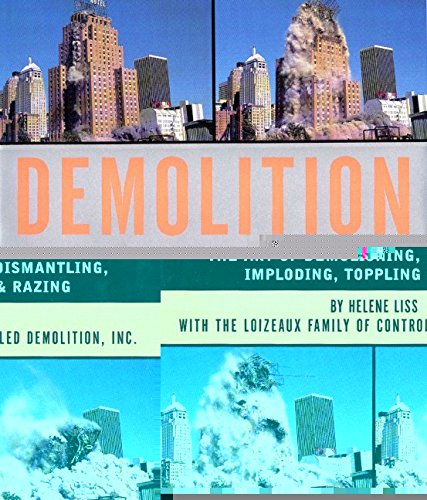 Demolition: The Art of Demolishing, Dismantling, Imploding, Toppling and Razing Amazon Price: $39.15 Buy Now(price as of Jun 14, 2015)
Yup, a book all about blowing up buildings.

In the third-tallest implosion ever staged in the United States, a shuttered 30 story condo hotel in West Palm Beach came down to make way for a $150 million development.  Huge crowds gathered to watch the 1515 Tower tumble thanks to 2000 sticks of strategically placed dynamite timed to bring the building into itself on Valentines Day, 2010. Spectators were kept 750 ft back and absolutely no one was allowed within 500 ft. The $40 million of surrounding buildings also warranted protection and at least one suffered some roof damage.

According to Popular Mechanics, the builders of Seattle’s Kingdome said it was strong enough to last a thousand years. Construction flaws, unhappy sports teams and politics lead to a much quicker demise. Just one day before the Kingdome's 24th birthday, explosives were used to level the Kingdome in just 16.8 seconds.

The Kingdome was the world’s largest thin-shell concrete dome. Taking the building down was recognized by Guinness World Records  as the largest building, by volume, ever demolished by implosion. It was the first large domed stadium ever demolished in the USA.

Kingdome debt lasted a lot longer then the actual building. Ten years after the Kingdome disappeared on March 26, 2000 the residents of King County were still responsible for more than $80 million in debt raised to build the dome.

At 31 stories and 378 feet and 55,000 tons Ocean Tower was an unfinished condominium in South Padre Island, Texas, United States and nicknamed "Faulty Towers" and "The Leaning Tower of South Padre Island".  Cracks were found in the building's supporting columns and the engineers found the core of the skyscraper had sunk by more than 14 inches. Though the developers initially vowed to fix the problem, studies found that repairs would be too expensive and they proceeded with the demolition in December 2009. It set a world record for the tallest reinforced concrete structure to be demolished in this way.

If you love the weird and dangerous, check out these posts:

Argentina, Russia, the UK, Canada, Taiwan, Ukraine, Italy, and the USA. We count down the best looking women in politics.