Before the Civil War, the smooth, natural gait of the racking horse had made it ideal for use on the southern plantations where plantation owners and overseers spent long days in the saddle. The 'rack' is sometimes called a single-foot. This gait is a bi-lateral, four-beat gait that is neither a pace nor a trot as only one foot at a time strikes the ground. The gait is not artificially achieved but is a naturally inherited gait.

At the trot, the horse springs from one pair of diagonals to the other (left front and right hind hit the ground together followed by the right front and left hind). This 'springing' is not comfortable for a rider over a long period of time and requires the rider to rise (post) up and down in rhythm with the trot.

While the pace is more comfortable (right fore and right hind hit the ground together followed by the left fore and left hind) there is a sideways motion which is itself uncomfortable over a long period. So plantation owners were pleased to find a breed that could sustain a good, comfortable pace for long periods.

The rack is however a very fast gait which this tough racking horse can keep up for hours at great comfort to himself and his rider.

The racking horse averages about 15.2hh. It is considered a 'light' breed and weighs around 1,000 pounds. It is attractive and graceful with an elegant head and longish neck. They may be any colour including spotted. He has a naturally high tail carriage which is achieved without 'nicking' and 'setting' as in some gaited breeds. 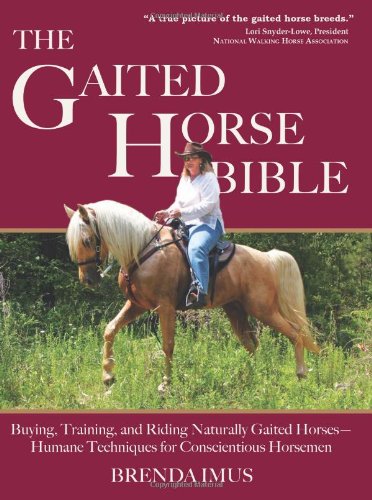 The Gaited Horse Bible: Buying, Training, and Riding Naturally Gaited Horses--Humane Techniques for the Conscientious HorsemanAmazon Price: $29.95 $17.64 Buy Now(price as of Jul 7, 2014)
This is a comprehensive instructional manual of how to train any kind of gaited horse.All aspects of the discipline are covered in this book.

The Racking Horse Breeders'Association of America (RHBAA) was formed to promote the racking horse as a separate breed from the Tennessee Walking Horse, and to create an organisation that would serve the interests of the amateur owners, trainers and breeders of racking horses. The RHBAA has a number of divisions aimed at accommodating all its members in their various stages of experience both in and out of the show ring. The aim is to promote the breed in its natural state as a pleasure horse par excellence without resorting to the excessive use of artificial aids.

Originally, show classes were for horses with no special gait enhancements such as chains or foot pads/shoes. Horses were shown with a natural tail carriage and the canter wasn't required. Nowadays, various classes are included in a programme to allow aids that enhance the distinctive action. Shoes and pads of various weights are allowed and light chains can also be used. Soring was, and still is, most definitely outlawed.

It has a friendly, kind disposition. It is intelligent, versatile and very 'people-friendly'.

An act of legislature designated the breed as Alabama's State horse in 1975. It is now found throughout the United States and has been imported into several countries overseas.