Frogs and Toads of the Lower Mainland

Amphibians are cold blooded vertebrates that live half of their lives in water and half on land.  Amphibians can breathe through their skin, making them very sensitive to anything they come in contact with, including human hands. When observing amphibians, one should never touch them to avoid hurting them. Amphibians have toes rather than claws. They are an interesting category of animals to study, so let's look at what we can find around Vancouver and the Fraser Valley of British Columbia.

There are a variety of amphibians found in the Greater Vancouver or Lower Mainland area of British Columbia, Canada.[1]

The Bullfrog is widely disbursed across North America, and has been introduced to other parts of the world.  It was introduced to BC 40 to 50 years ago and has become quite common. The bullfrog has an olive green back and sides blotched with brownish markings and a whitish belly spotted with yellow or grey. The upper lip is often bright green and males have yellow throats.

Look for Bullfrogs around the edges of large, permanent water bodies. Lakes, swamps, and ponds. The male Bullfrog's call sounds like the roar of a bull, leading to the common name.

Pacific Tailed Frogs were separated as a species from the Rocky Mountain Tailed Frog in 2000.  Within Canada, the little 2.5 to 3 centimetre frog is only found in British Columbia. Adults are usually tan or brown in colour although some may be shaded green or red, or even entirely black with the skin possessing a rather grainy appearance.

Tailed Frogs have vertical pupils, no external tympanum (the round "ear" visible on other frogs), and are voiceless. The toes on the back feet are flat and wide, especially the outer toes, and are a distinguishing feature of Tailed Frogs.

Only the males have the "tail" and it is strangely used to fertilize the eggs of the female internally. The tail is the same color and texture as of the back, unlike young frogs of other species may have a remnant tail for a few days, but these tail remnants are a different colour from the body.

The tadpoles of Tailed Frogs are easily identifiable from other frogs, with a very large sucker-like mouth. Hatchlings are almost transparent, while older tadpoles are dark mottled brown or black, often with a white spot on the tip of the tail. Tailed Frog tadpoles are found clinging to stones in streambeds.

They have a preference for year round clear, cool mountain streams, with large stones, cobbles, and stable boulders. The tailed frogs use these for shelter from the rapid current. They also like small channels without fish and with shade . Quieter side pools are needed so eggs and hatchlings won't be washed away. Young Tailed Frogs disperse from their hatching sites, but tend to stay close to home once they reach adulthood.

Credit: Min of Environment of BCAlthough not threatened, the frog has been studied as a model species for the effects of habitat fragmentation.  The Columbia Spotted Frog male s use a chorus (type of song) to attract females. This song ranges from a series of clicks to long, glottal sounds.

The red listed Oregon Spotted Frog, found only in the Fraser Valley north of the US border is very similar to the Columbia Spotted Frog. and until very recently was considered the same species.  The Oregon, as you might guess, ranges from Oregon and Washington, with a small cross border footprint of maybe 300 individuals.  It prefers valley floor environments where all the people are, and is therefore threatened.

Green Frogs are an introduced species in BC, native to the eastern half of North America. The green frog is one of the most abundant frogs wherever it occurs, with no known problems. It is a mid-sized true frog with adult green frogs ranging from 5–10 cm (2.0–3.9 in) in body length (snout to vent, excluding the hind legs) and normal body weight of 28 to 85 g (0.99 to 3.00 oz).

The Pacific Chorus Frog  aka Pacific Tree Frog ranges from BC to southern California, including the Lower Mainland of British Columbia. It is a movie star because so many films use its "ribbit” sound during nighttime scenes. Chorus frogs help control mosquitoes from there homes in wetlands and ponds.  Interestingly they can slowly change color from brown to green and back. Not quickly, more like over hours to weeks to match the general colors of the season.[2]  This little guy grows to about 2 inches.

They are the most common frogs on the West Coast of North America. Most populations of tree frogs appear healthy, and they have no concern or conservation status.

Pacific tree frogs are nocturnal and spend a lot of time hiding under rotten logs, rocks, long grasses, and leaf litter, so can be hard to spot. They hunt by climbing on vegetation and other surfaces where they are to ambush their prey. Much of their diets consists of spiders, beetles, flies, ants, and other insects and arthropods; they can and do eat insects that are almost as large as they are, and will expand their bodies slightly to accommodate these meals.

Northern Red-legged Frogs have declined due to habitat degradation and loss from agriculture, urban development and forestry. The suffer from competition from introduced Green Frogs and Bullfrogs. In Canada this species is nationally listed as Special Concern by the Committee on the Status of Endangered Wildlife in Canada (COSEWIC) and they are on the provincial BC Blue List. A subspecies of Red-legged Frogs, the California Red-legged Frog, was recently listed as Threatened by the state of California, for similar reasons.

The medium sized species gets its name from it almost see through red legs.

Amphibians and Reptile Guide for BC 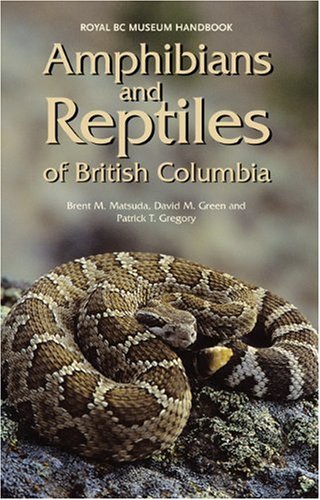 Western Toads are the  only toads found in the Lower Mainland of BC. They are native and quite large as toads go, between 5.6 and 13 cm long. They have a white or cream dorsal stripe, and iare dusky gray or greenish dorsally with skin glands concentrated within the dark blotches. The parotoid glands are oval, widely separated, and larger than the upper eyelids. It has a mottled venter and horizontal pupils but lacks cranial crests.

Males have smoother skin than females, reduced dorsal blotching, and nuptial pads (thickened skin) on their forefeet during breeding season.

Breeding is between March and July in mountainous areas, and as early as January in lower-elevation regions. The female lays up to 17,000 eggs stuck together in strings that adhere to vegetation and other objects along water edges.

The Western toad can be found during the wet season on roads, or near water at other times. When handled adults often vocalize, making a sound like a peeping chick while struggling. They can jump a long way for a toad and eats any type of insect it can catch.

Field Guide to Amphibians of BC 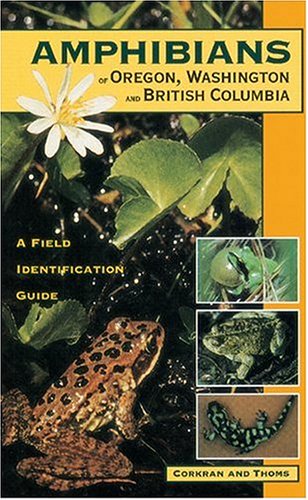 Amphibians of Oregon, Washington and British Columbia Amazon Price: $48.06 Buy Now(price as of Oct 17, 2014)
This book covers the amphibians found in the Lower Mainland, as well as the wider region of the Pacific Northwest

Credit: wikipedia commons
Next >> Going Grey is the Green Solution for Saving Water