I'm the man who's gonna be King of the Writers!
InfoBarrel is a writing platform for non-fiction, reference-based, informative content. Opinions expressed by InfoBarrel writers are their own.
InfoBarrel > Entertainment > Music

A group that really hits Home

Indie bands seem to be all the rage, aren't they? I've never been a big music buff, but most of the music that I like (outside of video game or anime soundtracks) comes from up-and-comers rather than the big pop stars. Can't say I was ever a big One Direction fan. So the hipster in me is dying to tell you about a really great band that you've likely never heard of.

"They exist. They're too mainstream for me."

The Attic Ends is an awesome indie group based in Bushwick, Brooklyn. They specialize in very “atmospheric” tunes, for lack of a better term. Most of their music has a haunting sound behind it, as if they were recorded in an alternate artistically monochrome world. Everything about them screams “indie” for all the right reasons. Just listening to the opening chords of any of their songs, you can see and hear right away that these aren't the manufactured pop stars that dominate today's music industry. They have a sound that is uniquely theirs and their songs (and fans) are better off for it.

So who are The Attic Ends? They are a four-piece band with members of very different musical styles. First, you have Jan Christiansen on keyboards, who “infuses classical piano melodies with an afro-Carribean sense of rhythm”, according to their website (I'm not a keyboard expert). Second is drummer Bob King, who has played in all sorts of bands and has very flexible skills on his chosen instrument, as does guitarist Pete Hur (I do not know if his name is intentionally a pun or not). Finally we have the band's singer, Samantha Rex. Samantha is their frontwoman, a former member of the German pop group Heaven Sent, model, and my future wife (that last one might be slightly inaccurate). You might recognize her from that Heineken commercial. You know. The Heineken commercial. With the Heineken?

Having formed the group in 2010, they released their debut album “Home” that year, followed by “The Sky Begins (Part One)” in 2013 and “Mark of the Moon (Part Two)” in 2014, the latter sounding a lot like a Transformers movie. In a decidedly indie move, they decided to fund and record their albums on their own rather than go through a record label that would ultimately be calling the shots on what songs they would create and how the group would look and sound (I don't think “Wrecking Ball” by Samantha Rex would really work out).

But every writer is told “Show, don't tell”. So I've spent all this time telling you how great this group is. Let me show you. Here are some of my favorite pieces (songs and videos) from The Attic Ends.

This is one of the first songs I ever heard from them, and I must say it's quite good. For me, there's a bit of a dichotomy between the song and the video that they probably weren't aiming for. The melody and lyrics are very haunting (I can really just copy and paste that sentence for every one of their songs, honestly), while in the video they seem to be having a blast. While the lyrics talk about not being able to give one's heart and seeing through all the lies, video has the four traipse through Manhattan having a wicked good time. I actually like that dichotomy, as it wasn't until I saw the video that I actually wondered who is taking the role of “You” in “Who Are You?”. I've always imagined it's the city itself (the song just doesn't feel like Samantha's addressing some thickheaded boyfriend or something clichéd like that), but I don't really know for sure.

Also, Samantha looks sexy in this video (I could probably just copy and paste that sentence for every song, too). What? Stop judging me.

The titular song of their first album. I guess if The Attic Ends had a main theme, this would be it? If so, they definitely put their best foot forward.

The first half of the song has the haunting melodies that sort of form their trademark, but with a very sad edge to them. The opening guitar riffs and the monochrome shots of a secluded home brings to mind a dead loved one who's spirit still watches over you.

Turns out there's no dead loved ones, just an apparent scumbag of a boyfriend (there was a part when the two of them were arguing that I seriously thought he was going to hit her. I was about to jump in there, somehow or other). The music picks up—almost turning into some decent fighting music—after he leaves her and she decides to move on and become stronger without him. The lively second half ends the tale on a triumphant note compared to the depressing beginning.

The video for this song isn't that great. Just a series of pictures from their Facebook profiles and whatnot. Nothing bad, mind you, but nothing to rave about either. But this isn't about the video, it's about the music. And this is a song where the instrumentals are what really shine. The vocals seem to take a backseat to the rest of the music even when Samantha is singing, and Pete's incredible guitar skills are what really make this one stand out from the rest. And extended guitar solo right in the middle holds the rest of this piece together, and it's beautiful, ethereal, and relaxing all at once.

This song might be tied for my absolute favorite Attic Ends song. I don't even know what to say about it. It pretty much encompasses everything that is their music (as if the other songs didn't).

I first heard this one through the Good Day NY report and was extremely happy to see them getting the exposure they deserve. It was nice to see the media focused on real musicians for once. Listening to this song a single time had me clicking through iTunes literally five minutes later to buy. Just watch to listen to the song and learn more about the group (I didn't know that Jan was a teacher, or that his name was pronounced “Yon”).

There isn't much else for me to comment on. Samantha flat out tells us what the lyrics are about. That still doesn't make “Fortress” any less fantastic. So stop hiding out in your fortress and listen to this song!

Say Yes To Me

This is the song that made me an Attic Ends fan. This was the song that ultimately had me buying their mustc and contributing to their Kickstarter campaign when they were making their second album. It was the very first song of theirs I ever heard and it still holds a special place in my heart when it comes to their work. I've had this on my iPod for a few years, and would listen to it a couple times in a row just because I liked it that much. I remember having an awful day at work (“awful” as in “I'm going to light this place on friggin' fire if I can just find a pair of matches”) and listening to this song one time just made me feel better.

Some people might disagree with me. Maybe the song is too slow, or too many of the lyrics are repeated too many times. I'm not a music teacher. If you've read this far, you can tell I'm not even really a music critic. But this was a song that's made long train rides and walks to and from work a little less stressful. It's a song I listen to when I want to be creative and can't figure out how. Short version: I like this song.

Also, Samantha's naked at one point in this video. So there's something for everybody here.

The Attic Ends is a fantastic four-piece band that I hope has a bright future ahead. Those who know me know I'm pessimistic about the music industry, but I hope that even without a label, they can break through all the soulless manufactured pop “artists” and achieve mainstream success while keeping their unique sound.

Learn more about them here: http://www.theatticends.com/bio.html 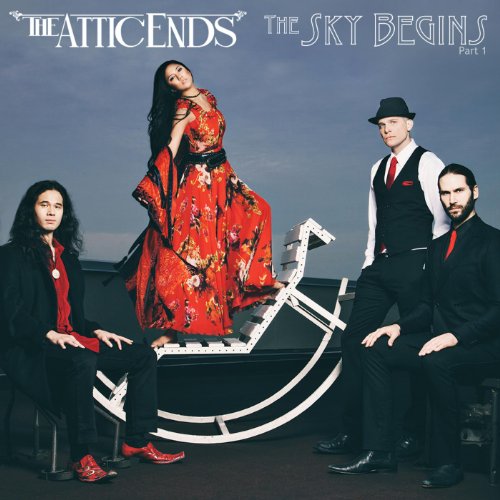 The Sky Begins (Part One) Amazon Price: $5.94 Buy Now(price as of Jul 18, 2014)
Anything you buy from them will be awesome. So buy! Remember that it all goes to them, not some record label executive.
Next >> Learn to Love Classical Music. Find Out What Amazing Songs You May Have Been Missing!