An Overview of Dairy Sheep

Whilst all sheep produce milk for their lambs, not all produce sufficient quantities to warrant milking for the production of items for human consumption.

Of the Friesian breeds, the German is the most productive and best known. It is commonly called the East Friesian. It is a highly specialised breed but is not suited to extensive flock husbandry conditions. Small populations are found in many parts of the country and they are a popular choice for individual households.

Western Australia at the moment has only two sheep dairies. One uses Poll Dorset/East Friesian cross ewes to achieve a longer lactation period and a quieter nature in the sheep.

Average production over a 220 to 240-day lactation may be 990 to 1,100 pounds. Like the Friesian cow, Friesian sheep are high producers but not suited to harsh, hot climates. Both Friesian cattle and sheep have proven to be great 'improvers' when crossed with native herds or flocks. The high fertility rate of the East Friesian and an increased milk yield is passed on to the offspring.The Friesians are all marsh-type animals with large frames. The carcass yields very lean meat. It is a polled breed with a white, wool-free face, ears and legs. The 'rat-tail' is long, thin and free of wool.

The long wool (4.7 to 6.3 inches) is used for carpet making. Fleeces weigh from 8.8 to 11 pounds. Triplets are common with the average litter being 2.25 lambs. Milk yields are much higher than for other breeds. Average total solids are 18% and milk fat from 6 to 7%.

The British Milk Sheep (BMS) is a composite breed, medium to large in size. They are said to be a 'dairy breed' as they produce a sustained milk yield over and above that needed to rear their lambs, usually triplets.

There is conflicting information on the composition of the breed but the problem seems to be with the percentages that the East Friesian, West Friesian, Blue-faced Leister, Polled Dorset and Lleyn contributed to the British Milk Sheep. Sources do agree that Laurent Alderson developed the breed in the Wiltshire and Northumberland area.

The breed was released in 1980. It is Britain's most prolific breed with mature ewes averaging 3.07 lambs and yearlings 2.21 lambs per ewe. An especially broad pelvic area aids easy lambing. The lambs are generally of good weight – from eight to ten pounds – and will grow to over 100lbs, producing succulent, lean meat with little or no fat.

A 300 day lactation may produce a milk yield of 650 – 900 litres. Milk solids are high and protein content rises throughout the lactation period, as does the fat content. Triplet lambs gain 0.33kg per day in weight. The high fat content (starting around 5.5% at the beginning of the lactation period and rising to around 9%) makes the milk excellent for cheese-making. The output of cheese from these ewes is nearly twice that of cows' milk.

British Milk Sheep produce a heavy, lean carcass. Ewes weigh around 85kg and rams around 110 kg. The face and legs are white and clean (without wool). They are a polled breed. The fleece has some lustre and a staple length of 12 to 18 cm. Ewe fleeces weigh in the range of 4kg with ram fleeces over 6.5kg. The British Wool Marketing Board rates the wool as 'excellent' and 'recommended'.

The BMS raises levels of production for the producer by bearing and raising larger numbers of lambs than is usual for most breeds. High fertility and high milk yield in both purebreds and crossbreds enables high levels of production without the need to run large numbers of ewes. This means less capital outlay on ewes and less costs associated with running the ewes. The ewes also have a prolonged breeding season resulting in an extra lambing over time. The breed is docile and friendly to handle. The British Milk Sheep is found in the United Kingdom and Canada.

Israeli Breeds - The Awassi and Assaf

The Israeli breeds, the fat-tailed Awassi and the Assaf are both highly productive. The Awassi is endemic to the arid Middle East.

The fat-tailed Awassi is naturally hardy and a good forager. Most ewes are polled although the rams are horned. The fleeces are used for carpet-making and have a varying degree of hair. Because of natural and selective breeding, the Awassi was the highest producing breed in the Middle East, producing 650 pounds per 210-day lactation.

However the Assaf now has double the milk production of the Awassi. The Assaf is a cross between the Awassi and the East Friesian. The original aim of the researchers of the Israeli Agricultural Research Organization (ARO) was to improve the fertility of the Awassi. The project was commenced in 1955. The result was the Assaf which is 3/8 East Friesian and 5/8 Awassi. Most Israeli dairy breeders are using the Assaf. As well as being a high-producing milk sheep, it produces excellent mutton and has adapted well to extensive management systems. Ewes lamb three times in two years and have an annual milk production of 450 litres. Assafs are now exported to Peru, Chile, Portugal and Spain.

The Belgium Milk Sheep has also had infusions of Friesian blood. It has been selected for its milking qualities since the 19th century. It is finely built with long legs and a wedge-shaped body. It has a 'rat-tail'. Fine white hair covers the head. The milk has a creamy taste.

The Bergamasca is possibly descended from Sudanese sheep. It had its origins in the north of Italy. They are raised for meat, wool and milk. They are prolific producers averaging 110kg of milk with 6% fat over a six month lactation. The Bergamasca is polled and one of the base breeds of the lop-eared Alpine group. Other breeds which spring from the Bergamasca are the Pavullese, Perugian Lowland, Fabrianese and Zakynthos. The Bergamasca is found in Europe and South America. The wool is of coarse type.

Chios sheep (see below) are usually white with black, occasionally brown, spots around the eyes. The head is often black. There may be spots on the ears, nose, belly and legs. It has been suggested that the Chios is a mix of local Chios island sheep and Anatolian breeds. It is regarded as one of the semi-fat-tailed breeds.

Depending on conditions and management practices, production varies from 265 to 660 pounds of milk per lactation. The Chios is found in Greece and the Mediterranean.

Chios sheep are regarded as a semi-fat-tailed breed.

The Spanish Churra is native to northwestern Spain. It is a very tough breed and copes easily with the long, severe winters, very short springs, and hot dry summers of its native areas. The classic Spanish sheep's milk cheese is Zamorano. Full cream milk, mainly from Churra sheep, goes into this product. Churra sheep were taken to the Americas by the Spanish and gave rise to the Navajo Churro.

The Comisana originated in south-east Sicily and has spread throughout Italy. It is an important Mediterranean breed, highly valued for its milk yield. It is a polled breed with semi-lop ears, medium to coarse wool and a reddish-brown face. It has the common name of Red Head. Under good management conditions, ewes can produce 0.53 gallons (US) per day.

The milk is normally processed on site. This traditional cottage industry has been established for thousands of years and a variety of home-made, high quality cheeses are produced. Two hundred litres per lactation is the average. There is a total population of around 700,000 Comisana sheep of which 54% is found in Sicily with the remainder in Italy and other Mediterranean countries. The breed is well-suited to both intensive and extensive systems. The wool is coarse.

The majority of sheep in France are of the Lacaune dairy breed. They are well adapted to harsh conditions and rocky terrain. A sophisticated testing system involving artificial insemination, progeny testing of sires and milk recording have resulted in an annual genetic milk yield improvement of 2.4%. Although they produce slightly less in quantity than East Friesians, the milk has a higher total solids count. Roquefort cheese comes from the milk of the Lacaune.

The breed is robust and healthy. Their milk has a high butter fat and milk protein content, lambs have high daily gains and produce a good carcass. The meat is mild-tasting and nicely coloured. It is well adapted and specifically bred for large commercial dairy sheep operations where milking is done by machine. The breed is found in Europe, and North and South America.

Credit: By Deviers.fabien (Own work (Photo personnelle)) , via Wikimedia Commons

Milk from Lacaunes has a high butterfat and milk protein content.

Europe, together with countries on or near the Mediterranean Sea, is responsible for the bulk of the world's sheep milk production.

In Australia, South Australia, Tasmania and Western Australia each have two commercial farms, Victoria and Queensland one each. Sheep milk is usually processed on the farm. Around 60% of the milk goes into making yoghurts and the rest is made into cheese. The breeds are mainly crossbreeds. In 2006, the total dairy sheep population was about 4,000 sheep.

The United States is home to approximately 100 dairy sheep farms with the majority situated in New England and the Upper Midwest. New York and California each have several large commercial sheep dairies. 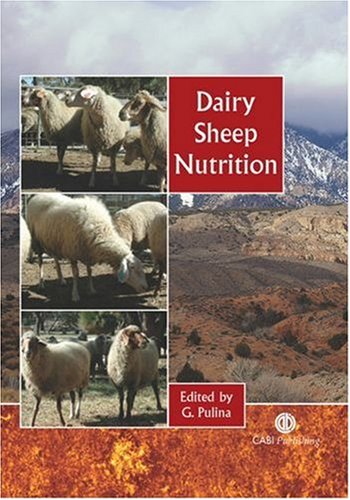 Dairy Sheep NutritionAmazon Price: $170.00 $143.32 Buy Now(price as of Dec 1, 2013)
Good nutrition is critical in optimising dairy production from sheep. This includes updated information, and new material. All aspects of dairy sheep nutrition and feeding are covered.
Next >> Zika: The Warnings About Wolbachia and Culex Our Health Authorities are Ignoring