The evidence discovered by archaelogists demostrates that ever since the Neolithic period, the inhabitants of Egypt had a profound belief in the existence of a spirit world in which the deceased would have needs similar to those they had known during their terrestrial existence. It was actually in Egypt, around 2600 BC at the time of the 3rd Dynasty, that the first true monumental tombs in history were built. If in the Protodynastic Period, the royal tomb was already strictly conected to the affirmation of terrestrial power, by the 3rd Dynasty, the tomb had also become a symbol of the pharaoh's divinity and of his power and celestial capacity to overcome death of which the whole country could benefit. To express these new concepts, Imhotep, a great chancellor and architect, designed the first stepped pyramid at Saqqara which symbolised a staircase towards the sky allowing the pharaoh's celestial ascension. This is an idea expressed on a number of occasions in the 'Pyramid Texts' (collections of formulas and prayers that were found inscribed in the pyramids dating back from 2400BC onwards and which subsequently evolved into the 'Sarcophagus Texts' and the 'Book of the Dead'. Later generations of rulers also adopted the concept of the pyramid-tomb which, during the reign of Snefru (2575-2551 BC), acquired its definitive form as an expression of the ever greater importance attached to the solar cult in association with that of royalty.

The Passage From This Life

As the religious concept had evolved, the celestial staircase was no longer necessary: the steep asides of the pyramid, a manifestation in stone of the sun's rays, similarly allowed the pharaoh's spirit to reach the sky. During the New Kingdom (1550 - 1075 BC), the Egyptian soveriegns, having abandoned the use of the pyramid form for royal tombs, had immense burial chambers dug into the rock and decorated with magical-religious texts; their contents would allow the deceased king to overcome the innumerable dangers that he would encounter on his journey through the underworld before joining the sun god Ra, of whom he was believed to be a son. Because the journey through the underworld was so perilous, the dead were accompanied by numerous amulets. Moreover, it was thought that a particularly delicate phase existed between the moment of death and the true passage to the underworld during which divine judgement, that not even the pharaoh could avoid, took place. The deceased, brought before the gods Osiris and Anubis, saw his own heart weighed by the god Thot on scales counterbalanced by a feather, the manifestation of Maat, the goddess or order and justice. If the two plates of the scales were balanced, then the deceased had been upright and honest during his terrestrial life and deserved to be welcomed by Osiris into the next world; otherwise, the spirit was devoured by a terrible monster and annihilated forever.

All of the New Kingdom's magnificent underground tombs contained fabulous funerary goods, as the tomb of Tutankhamun demonstrated. The funerary caches were considered to be crucial to making life in the underworld more pleasant and thus included everyday objects, furniture, games and foods of all kinds. Moreover, the tombs also contained special statuettes that, once brought to life in the underworld, would have obeyed the orders of the dead and completed the most onerous tasks in his place. A large, richly appointed tomb was not the exclusive privilege of members of the royal family, but one also of high ranking dignitaries and even simple artists and craftsmen: they also prepared highly ornate tombs, although the decorative motifs were different to those of the royal tombs and were inspired by scenes of daily life rather than of the underworld.

Preserving The Body For The Next Life

The characteristic that differentiated the civilisation of Ancient Egypt from all the others which developed in the Mediterranean basin and the Near East, was the perceived need to conserve the mortal remains of the decease intact. As a consequence, embalming techniques were developed, initially in fairly rudimentary form around 2500 BC, and became more elaborate during a process of evolution that reached its height in the New Kingdom. Embalming continued to be practised in simplified forms in the Late and in the Greco-Roman Periods (664BC to 313 AD).

The Jouney To The Tomb

The funeral rituals were always very complicated. During the New Kingdom, following embalming, the coffin was transported by the deceased's relations to the west bank of the Nile on a boat adorned with flowers, amidst the laments of those present and the prayers offered to Osiris and Anubis by the priests: the boat was followed by a fleet of other vessels carrying friends, furnishings, and offerings. Having reached the west bank of the river (where the necropolises were located), the sarcophagus was placed on a wagon drawn by oxen and a funeral procession formed along the route to the tomb. Here the ceremony of the "opening of the mouth and of the eyes" were performed to allow the deceased to regain the ability to speak, see and feed himself in the next world. The sarcophagus, the furnishings and the offerings were then placed in the tomb before it was sealed for eternity. 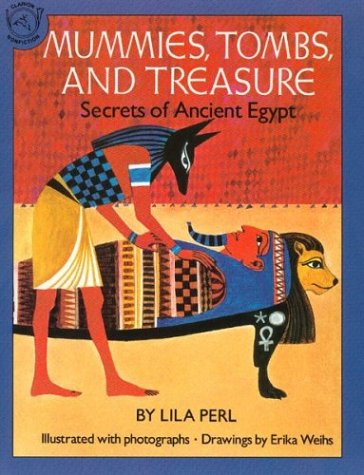