On October 23rd, Netflix aired the third and final season of Hemlock Grove, one of its original shows created by Eli Roth. However, right from the get-go, the show had a bad habit of raising more questions than it left answered as well as dropping plot lines like sacks of rotten meat. This left most final episodes throughout the three seasons of the series open to speculation and interpretation. However, does Hemlock Grove end closing up all those open plot lines and itching questions in its finale?

No. Not really, no. I have wrote speculation and tried to answer some of the burning questions for both season one and season two of Hemlock Grove. To be frank, I lost interest after season two started to go all wonky, but I am the type of person that "gots to know" when something is a mystery. While the final season of Hemlock Grove cleared a lot of things up, it kind of pushed other open-ended events from past seasons to the wayside and told audiences not to really think about it. So, I took notes, diligent ones, writing down all the questions in season three that didn't get a solid answer for my final "Answers to the Questions" article.

Note: Spoilers are below. Only those who have watched season three through to the end need venture there.

What Happened to Shelley's Hands?

In season two, after being shot twice by the local sheriff, Shelley seemed to undergo an off-screen transformation that was really never addressed. In season one, she possessed a luminescence, but after the shooting that went away alongside the old pain she used to suffer in her hands. She did get shorter and gain the ability to grow hair (she wore a wig otherwise). Her arms are seen being bandaged by Olivia in season three with her hands being thick and grey underneath. This is an unaddressed nod at Frankenstein's monster with her hands changing to match his pallor. The skin is thicker and she has better use of them; however, it is unclear whether her whole body will eventually come to match it.

So, the whole "major plotline" about Spivak turning into a giant manta ray and stealing baby Nadia was pretty much forgotten on and off throughout season three, only being tossed in briefly like they forgot it until he met his anti-climactic end. So, in the end, what exactly was Spivak?

The Upir refer to him as Omul Negru, which roughly means something akin to "black one". It is essentially the Romanian version of the boogeyman, but Hemlock Grove hijacked it for its own means and transformed it into Jormungand, a serpent Norse in origins (which explains Spivak's distain for Scandinavia) that is so large that it wraps its body around the world. In Hemlock Grove it is stated to eat its own tale which fits with that whole Ouroboros theme that they tossed aside for the most part. It is also mentioned that Jormungand is less of a god and more of a race of creatures, with Spivak being the last.

Of course, why they decided to make him a manta ray instead of a logical choice, like a snake with wings, who could say?

Why does Spivak Hate Upirs?

This question is actually loosely addressed, but never clearly stated. As Dr. Pryce discovers, Spivak's race of creatures are weak to Upir venom, which seems to be this convenient venom's only purpose. As his race was hunted to the brink of extinction and he has such a love-hate relationship with Scandinavia, it is only natural to assume that a number of Upir lived in Scandinavia, competing for the right to eat the humans, and the Upirs won that particular fight.

So thus, that is why he created the cancer that infects Upir and adds in a touch of Ouroboros in for irony. This was also to protect his ill-fated ilk, killing off their only natural predator.

What was the Creature that Pryce Flushed Before the Raid?

When Olivia was bluffing and saying that agents were there to raid Dr. Pryce's lab, he was working on a new creature that was flushed after a touching moment then promptly never mentioned again. There are two schools of thought here. Pryce's eagerness to use human growth hormone suggests that it was meant to be another, more rushed body for Shelley's consciousness. However, while that explained the many defects of this fetus, it looked distinctly more giant-manta-ray-ish, which may have meant that he was using some of Spivak's DNA to recreate whatever he was to study. Although, his tender moment with the fetus tends to lean towards him creating another Priscilla.

What Happened to the Order of the Dragon?

Remember that order of supernatural hunters that were first introduced with Clementine in season one and continued with her brother and Bishop Francis in season two? Well after the death of the bishop and Clementine's brother in the first episode of season three, apparently they gave up their holy cause. It is likely that audiences were meant to believe that the order died out, but after the death of only one stronghold? This is one of those loose ends that Hemlock Grove likes to ignore. However, the proper order (and not the Caul cultists) do have a live and let life mentality towards super naturals who don't kill like wild animals, so since Roman didn't feed violently until right up near the end, they may have left him alone.

So, this baby that was supposedly so special in season two seems just like a normal baby in the final season. No killer death stare, no noticeable awareness of things, just pooping and smiling. Not even being evil like in season two. So what is Nadia exactly? While some speculated that she was some sort of evil anti-Christ, in season two Spivak admits that it was because of Miranda's breast milk that she manifested these powers. With Miranda dead at the end of season three, she has likely returned to being a normal baby / dormant Upir. It's possible that the breast milk was awakening her upir powers, since she is rumored to be the strongest of the supernaturals.

What did Spivak want with Nadia?

You'd think they would have made an answer to this question more clearly in the final season of Hemlock Grove, but alas... It is stated that if Spivak wanted to breed his race he would need ova, as in eggs from ovaries, and girl babies have the most eggs as they have not started to release them yet. So the simple answer is that Spivak wanted Nadia to remove her eggs and fertilized them to make thousands of children. However, why he couldn't just take some random baby girl, but instead needed Nadia is never addressed. Perhaps he was trying to make his race stronger through eugenics, which would have made them more resistant to Upir venom, but that seemed to have failed. 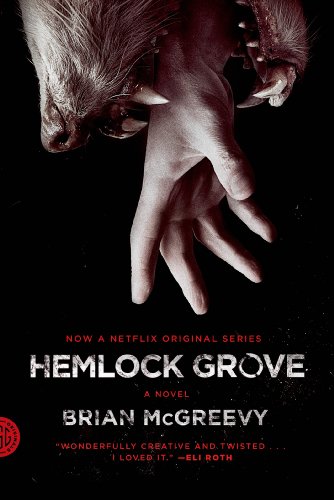