As I was trying to get yard work done, I couldn’t help but notice a congregation of ants with wings hanging around on my front porch like there was a party going on and they were big ones.

I basically left them to do whatever it was they were doing as I didn’t want to feel the wrath of any ants, never mind ones with wings.  I carried on with my yard work and forgot about them.

But as I went through my basement at the end of the day without turning on the light I suddenly felt pinching on my socked foot.  I quickly went and turned on the light and to my horror my sock was covered with these winged ants and they were trying to bite and crawl up my leg!

I tried to hold off the panic that was building inside of me, and quickly took my sock off and threw it in the laundry sink and turned on the water.  I assumed I had picked them up from outside but couldn’t figure out how they would have got in my shoe, until out

of the corner of my eye I saw a scene that raised my panic level even higher on the floor.  As I was trying to wash my sock and get rid of them, I realized something was moving near the sink and I was almost on top of them.

The floor drain in my laundry room had tons of those flying ants coming out of the holes of the old metal lid, it was literally moving.  I screamed for hubby and we both feared these things were just about ready to take flight and then where would they go?  There were literally hundreds of them.

Didn't Want to Use Outdoor Products

We didn’t want to spray chemicals in the air or in the floor drainage system, so I grabbed whatever was available and that was some laundry detergent!  I figured it wouldn’t hurt the pipes; it was environmentally friendly liquid low sudsing stuff, so poured some on the ones sitting on the lid to stop them from taking flight.

Then hubby, armed with a coat hanger dragged the lid off, and we realized that over time these little critters had managed to build this dirt nest about 6 inches down the drain from the floor surface where the old concrete floor met the pipe.  There had been a little dirt area there and they had started building home there.  Obviously with no fear of the water lower down in the pipe.  I wonder where they found all the dirt to add to this nest?  It was amazing what they managed to build in there.

With the lid off the hole looked simply alive with movement.  They had built a dirt nest all the way around the circle of the pipe making the circumference smaller.  All I could see were wings and bodies moving it was unreal.

Since it had been a long time since any water had needed to run down this drain, there was some water in there but further down, so we took a bucket of hot water and started pouring it down and managed after a few times to flush them down the sewer.  We then took the metal grated lid and washed it quickly in the sink.

We managed to get them all but it took a fair bit of flushing of hot water down this draingage system as many were simply climbing back out and we couldn’t pour it too fast for fear of flooding them back out onto the floor. 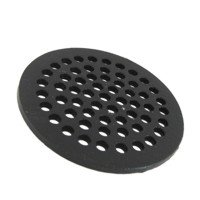 The good news to all of this is the laundry room smells great now, and the draingage pipe looks much cleaner.  We replaced the cover with a better fitting one like the one pictured.  Thankfully the drain was still operational, my fear is we would pour water and it would back up as this is an old 50s bungalow!  I thought all that dirt they had brought in would plug it up, but it didn’t.

So, we can’t keep every insect out of the house, I know with a dog and a cat, things tend to get in, but ants with wings will bite when aggravated, and that is what I felt on my sock.  Plus they were ready to take flight.  So, basically when I walked through the laundry room in the dark, I had kicked them on the drain lid in the dark and basically walked right through them.

Maybe they were talking to the ones outside, or there is some kind of flight plan that takes place for them all to go out there and find new quarters, but I stopped this nest from taking flight.  Not a fan of killing anything, but the idea of hundreds of these flying around my house was enough to instill panic.

It is simply amazing where these insects will build a nest.  I can’t believe that every time I was in there doing laundry that these guys were busy building just under my feet.  So, we have since filled in that tiny dirt area down in the drain.  It was a tiny crack in the concrete.  So, every so often we make it a point of checking under that drain cover just to make sure and also to send some water down the drain to freshen it.

From that day forward, I never enter the laundry room without turning on the light and staring at the floor!

After much research it turns out we took the right approach, apparently most ants do not like laundry detergent.  So, you can simply put detergent and water together in a spray bottle if you want a less chemical way to get rid of ants especially if they are in the house.  Or pour it directly on the nest like we did.  Cleanup is easier and better for your health than chemicals.

So if you are having any trouble with ants or bugs, check your floor drain and make sure they haven’t taken up residence in there like they did in my house. 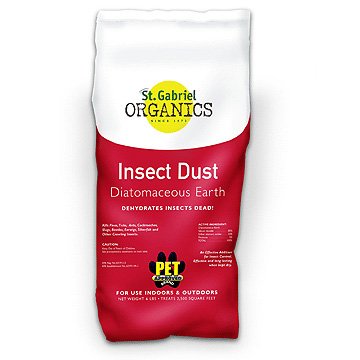 St. Gabriel Laboratories All Natural Indoor/Outdoor Insect Dust Repellent - 4.4 lb Bag 50020-7Amazon Price: $11.12 $8.12 Buy Now(price as of Oct 14, 2013)
this is another natural option that will work indoors for any infestations without worry of reactions.
Next >> How Much Does it Cost to Finish a Basement?