A decade or so ago a new type of dog control device came onto the market: the dog head halter. The idea is clearly patterned after large animals like horses, who are always controlled with head halters and never with collars. Where the head goes, the body must follow is the thinking. So why not dogs? Many people have a lot of trouble convincing their dogs to not drag them around on a leash when it is attached to a collar or harness.

So the dog head halter made its way onto the pet store shelves. Strangely enough, many of the "positive only" trainers eagerly seized upon these devices as totally humane methods of dog control. Possibly it was because they were getting kind of desperate- the horrible-looking prong collar is what most trainers use with out-of-control dogs, but if you're  a self-declared "positive only" trainer you can't really recommend the use of a device that looks like a medieval torture instrument. Never mind that most dogs don't mind prong collars at all, and they are very effective tools for keeping large dogs from dragging their hapless owners around.

Of course then a lot of other problems popped up. One was the dogs themselves- they really didn't seem to agree with the trainers about how gentle and humane these head collars actually were. The other was the slow realization that if you attach a leash to a dog's muzzle there is a real potential for very serious neck injuries.

Gentle? I think not

So your trainer claims that your dog can be humanely, effectively controlled with something called a "gentle leader." Ok, sounds great you say. You're all for gentle, humane training methods. The trainer puts this thing that looks like a muzzle on Fluffy and your dog goes nuts. Leaps up and down like a trout on a hook, flings himself into the wall, and then eventually just lies down and refuses to move. That is many people's experience with how gentle and kind these devices are. Others find their dogs cringe and creep along looking dejected while wearing the device. Still others find their dog waits until they aren't looking, and then the dog quickly goes swipe with the paw and removes the offending straps from the muzzle.

Oh, the trainer says, that's normal. You have to TRAIN Fluffy to wear the device. You're kind of mystified by this, since you certainly never had to train your dog to wear a collar, a prong collar, or a body harness. Or anything else for that matter- you even managed to get Fluffy to wear a spectacular Halloween costume without any training at all.

But hey, it's a trainer, she must know better than you. So after five weeks of training, Fluffy has gained ten pounds from the many meatballs you used to convince him to wear the head device. He now cringes and creeps in it instead of acting like a hooked trout. You can't help but notice that when you pick up that horrible prong collar he's there leaping and dancing ready to go out- he even tries to shove his head into the prong collar for you- but when you pick up the halter, he hides under the bed and won't come out unless you wave some string cheese at him.

So how exactly is this device so gentle and humane? Fluffy doesn't seem to agree with that assessment at all.

Horses don't seem to mind wearing halters at all. This is true. Horses have long, bony heads. If you look at how a halter fits on a horse's head, you'll notice there are no straps near the sensitive eyes or near the sensitive mouth and nose. The horse can open and close his mouth while wearing a halter, and the halter does not touch his soft nose at all.

Notice that on a dog, a halter really has nowhere to sit. Most of a canine's muzzle is the mouth, and any straps around it must by default come in contact with the sensitive mouth. Practically all dog halters impede the dog's ability to open its mouth. And most of them have straps that are practically in the dog's eyes. Dogs with squished up muzzles are even worse off- there's simply no way to humanely put a halter on a pug. Or any dog for that matter.

It is not at all surprising that most dogs act like the mere fact of wearing a head halter is punishing to them, because it is. We see dogs with the sensitive skin near their eyes squished up under head halters, miserably squinting and acting like dejected prisoners. 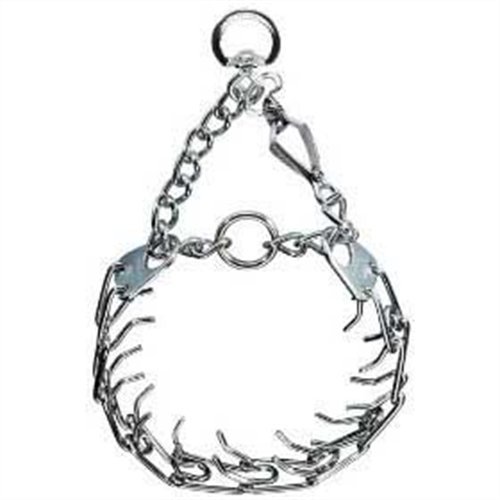 The other problem with dog halters is the potential for neck injury. Horses are huge, powerful animals with heavily muscled necks. A pitifully weak human yanking the horse's head around with a halter isn't going to damage the horse at all. Not to mention that most horses are actually trained to not pull on the lead, and if they do, they get a chain over their nose to remind them not to do that again. So horses aren't actually yanked around by the halter on their head very often at all. If they do get pulled, due to the size of the animal the pressure is safely downwards.

Dogs necks aren't anywhere near as sturdy as a horse's neck. Most people, particularly those considering the use of a dog halter, haven't managed to train their dogs to not pull on the leash. Now imagine one of these under-trained dogs lunging after a squirrel in a head halter. The dog will hit the end of the leash and get his neck violently snapped to one side and upwards, the same motion you'd apply if you wanted to kill the dog by breaking its neck- remember how they show people being killed by breaking the neck on TV? Grab the head, twist it sharply upwards and sideways. The pressures applied to the dog's neck by a halter are exactly the same as what you'd get if you grabbed a football player by his facemask as he went running by. Football players have been paralyzed and even killed by this, which is why it's absolutely not allowed in football. We haven't been able to find any actual reports of dogs breaking their necks in head halters, but we suspect it has happened a time or two.

The leverage allowed by the halter means that any time the leash goes even slightly taut, Fluffy's head gets yanked violently to one side. Most dogs put into head-halters are very under-trained and haven't learned how to pay attention and follow along with their owners, so they probably hit the end of the leash quite often. Day after day, the neck gets torqued. Won't be long before Fluffy has a neck that is a quivering wreck of soft-tissue injury.

A leash is probably the most obvious training tool- you put it on the puppy to help control the puppy while you train, and then you can get rid of the leash and the dog will still be able to heel, sit, come and pay attention to you. Prong collars are another great example of a training tool- many dogs rapidly learn to not pull on the leash or lunge into the leash when put into a prong collar, and after only a few weeks you can take it off and the dog continues to not pull or lunge.

Not head halters. Your dog may not pull or lunge in a head halter, but the second it comes off the dog reverts to its former behavior. Head halters might be management tools, but they aren't training tools. In fact, that's exactly how most people use them. As a quick fix, as an alternative to training the dog. Instead of spending time training the dog to not lunge and pull, they slap a halter on the dog. Such people actually like the cringing, depressed dog that halters create. A cringing, depressed dog is less likely to do anything.

Humane? no. Gentle? no. Useful? no. Just say no. Halters are for horses. 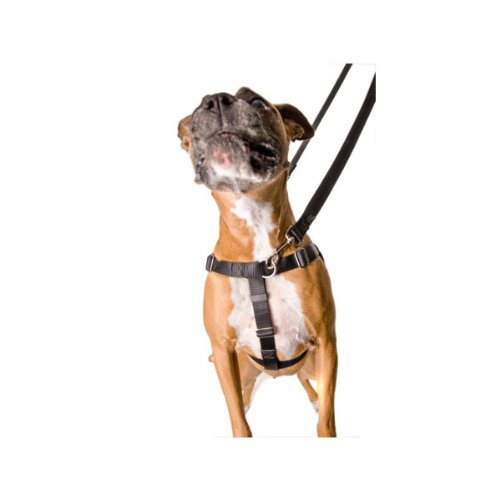