Find out more about me on my writer's webpage Check out my books on my Amazon Author Page
InfoBarrel is a writing platform for non-fiction, reference-based, informative content. Opinions expressed by InfoBarrel writers are their own.
InfoBarrel > Health > Alternative Medicine

Are You Your Own Placebo? Take the Journey with Lissa Rankin

How To Create Your Own Best Health

Have you ever wondered how much our thinking and how we live our lives has to do with our health, more than genes, germs or dumb luck? Have you ever asked yourself if had the power to make yourself well - and sick?

When I began reading Lissa Rankin's Mind Over Medicine: Scientific Proof You Can Heal Yourself, I didn't expect any surprises. I'd watched her talk about her ideas on a PBS special and was convinced her ideas were solid, if not original.

I was in for a big surprise.

Looking Back for Insight

How much are we all in control of our own health? I wondered about that for decades.

I'm not talking about accidents or the inevitable affects of aging. But I remember reading about a study, back when I was only twenty, that showed the executives who believed they were vital to their businesses did not get sick until a critical project was completed.

Slowly but surely - and very reluctantly - I came around to a philosophical understanding that we not only make ourselves well, we also, at least some of the time, make ourselves sick. The thing is, we all seem to know it too.

"You'll worry yourself sick" is a warning I've heard all my life. It took a while to accept that we can also happy ourselves well.

But all that was pretty general, stuff to get conversations spiked at parties or to mull over in the wake of an illness, my own or someone else's.

Then, speaking simply and directly, Lissa Rankin delivered her bombshell of a book. Rankin did the research, and she shares it with some of the smoothest, most engaging writing you're likely find anywhere.

When she says, "Scientific Proof," she means it. 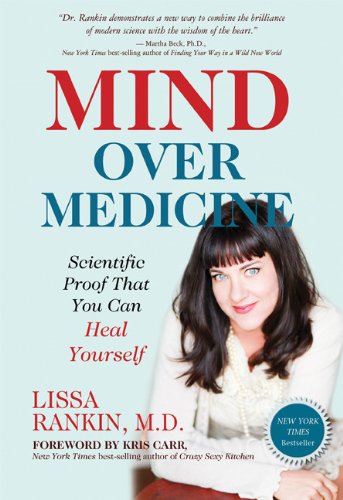 Mind Over Medicine: Scientific Proof That You Can Heal Yourself Amazon Price: $24.95 $13.65 Buy Now(price as of Aug 27, 2014)
More so than others, Rankin doesn't just talk her case convincingly. She's done the research, and she lays it out in detail. We can heal ourselves. It's been done. It's being done all the time. What really gives this book power is that Dr. Rankin has taken her own medicine and, with a great deal of personal exposure, she tells us about her own case, how awful it was, how it got that way and how she fixed herself.

The Proof Is In The Placebo Pudding

Dr. Rankin's painful personal history is what finally propelled her to do the research leading to this book. It wasn't enough that she healed herself, she was determined to share the keys to healing, but a scientist at heart, she wanted to build a strong story from research that had been reported in reputable journals and accepted.

Virtually every medical doctor has seen miracle cures among his or her patients, spontaneous remissions and healing that should not have happened, according to what they knew about their patient's condition. Yet they happen, and they happen routinely.

Because of the woo-woo nature of what they've seen, their stories rarely get outside the doctors' lounge.

A key to self-healing is what's popularly known as the "placebo effect." Placebos are commonly used in research to test the effectiveness of drugs and procedures. If in a blind, placebo controlled test, the medicine produces results that are no greater than what patients receiving placebos, that is - fake medicine, find, it's assumed to be useless.

A better question is what makes a placebo work. Keeping in mind that drug companies, in setting up trials, screen out candidates most likely to be receptive to placebos, how is it that they work, time and again?

And it's not just drugs and sugar pills we're talking about.

In a well done trial for a common form of knee surgery, one of the field's best known surgeons arranged a test where 1/3 of a group received surgery to relieve knee pain, 1/3 received fake surgery, incisions made but without any work being done, and 1/3 received no treatment. Just as many people getting fake surgery got relief as those getting real surgery.

What seems to matter most is the patient's belief that their knee problems would be improved, not the treatment or lack of it. This wasn't a temporary result. Two years later, patients who got fake surgery were still doing just as well as those receiving the real thing.

But Did You Know How Crucial Friends Are To Health?

The Placebo Effect and Beyond in Mind Over Medicine

After extensive research, satisfied that placebos are a clear function of how our minds work, that belief is the key element, Dr. Rankin goes on to research what other things in our lifestyles and of course in conventional medicine help create and maintain good health.

The results here are even more surprising as she digs deep into the research to discover what's been published - and often not pursued - about lifestyle and health.

We all know about the dangers of smoking, obesity and alcohol abuse, but when Dr. Rankin uncovers research suggesting that joining a group can have an effect as salubrious as quitting smoking, gates to understanding fly open.

We begin to see health and sickness in whole new ways. There's much more, wise and empathetic, to make this book a small wonder of shared wisdom of what it means to be both healthy and happy.

Since reading Ivan Illich's landmark Medical Nemesis, The Expropriation of Health, decades ago, I haven't read another book with this much to teach us about health and, not just that, how to tip the scale of well-being in our favor.

I recommend Lissa Rankin's Mind Over Medicine without hesitation. If you're a seeker of good health or just curious about how it all works, you'll be satisfied beyond expectation. You will also be utterly charmed by Dr. Rankin's warmth, humor and affectionate storytelling she shares her discoveries and the personal crisis that brought her to it. 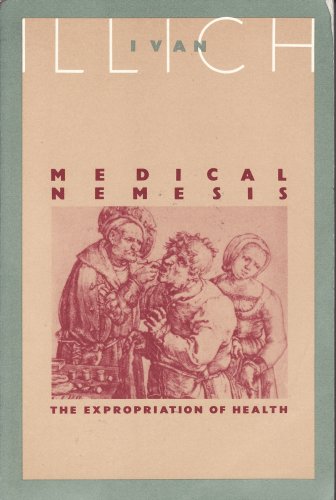 Medical Nemesis: The Expropriation of Health Amazon Price: $17.85 Buy Now(price as of Aug 27, 2014)
Lissa Rankin doesn't go nearly as far as Illich, but this book gives you a deep grounding in the arguments of a respected skeptic who believes doctors go too far by leading patients to expect too much.
Next >> Spices as Medicine: 8 Spices with Healing Powers