Get The Mindful Way Through Depression: Freeing Yourself from Chronic Unhappiness cheaply from Amazon or search for more books on depression. You too can earn money from writing articles by signing up for InfoBarrel.
InfoBarrel is a writing platform for non-fiction, reference-based, informative content. Opinions expressed by InfoBarrel writers are their own.
InfoBarrel > Health > Mental Health

Chronic depression, clinically known as major depressive disorder, affects millions.  Not only does it make the sufferer feel terrible, it can also kill.

Overwhelming feelings of malaise, hopelessness, and listlessness plague the depressive.  Low self-esteem coupled with a crushing sense of worthlessness combine to erode the sufferer’s sense of purpose or place in the world.  Despair and loneliness of the kind most people never feel are constant companions.  Life is not worth living, and the simple act of rising from bed every day becomes a Herculean task.

The recurrent depressive cannot become motivated oftentimes for the simplest tasks.  Many activities from which the sufferer once gained pleasure no longer hold any allure.  Lack of energy (both mental and physical) typifies the condition.

Other symptoms include loss of appetite.  This leads to poor eating habits, and in turn to general poor health.  Another aspect of clinical depression relates to sleep.  Ironically, the person with recurrent depression either cannot sleep (has chronic insomnia) or sleeps too much (often for more than fourteen hours per day).   These pendulum sleep patterns may alternate rapidly: one day not sleeping, the next day sleeping too much.

Major depression, untreated, can kill simply by what one might term “slow suicide”.  Poor eating habits lead to malnutrition, which in turn can lead to a compromised immune system, exposing the depressive to illnesses he/she normally would not catch.  But beyond this single biological issue lay two other, more critical, causes of death: suicide and substance addiction.

Death is very desirable to the depressed.  Many simply cannot take the rudderless, “down” feeling anymore, and choose to end their lives (hanging, slashed wrists, etc.).  Others, while perhaps not actually intending to kill themselves outright, turn to “self-medicating”.  The sufferer becomes addicted to alcohol or other substances to stave off the bad feelings.  In another ironic twist, alcohol and many other drugs of addiction are depressants, thus making the user feel more depressed,  leading to more substance abuse to ease suffering.  Liver disease and other organ failure (and other complications leading to death) can occur.

The last "death" method is more of a passive-aggressive approach to “life”.  The depressive, feeling he or she has truly nothing worth living for, may not overtly attempt to take his/her own life. Such a person may apathetically engage in high-risk behaviors that could ultimately kill him (rock climbing without proper safety gear, for example).  He may learn he has a life-threatening illness, such as a cancer.  This person may choose to refuse medical treatment and will allow the disease to kill him in due course.

Unfortunately, the chronic depressive is not the only one suffering.  The depressive’s family, friends, and co-workers all suffer, too.  The mother too depressed to rise from her bed and play with her children, the father who stays drunk and doesn’t engage in family activities, the teenager who abuses drugs: all adversely affect the people who love them.  This is not by design.  The chronic depressive (generally very inwardly focussed) is not seeking sympathy from others; he or she simply wants the agony to stop.  One of the more frustrating aspects of clinical depression is the inability to adequately explain to another how one feels.  The average person does not understand how debilitating this disorder is, and therefore cannot comprehend why one would behave as he/she does.

The good news is effective psychiatric and medical care exists.  The condition stems from a chemical imbalance in the brain, upsetting the brain’s serotonin levels.  There are also emotional and sociological components that work with the chemical imbalance to create the chronic depressive.  Treatments begin when the sufferer recognizes something is “wrong”.  Failing this epiphany (and most depressed people are not inclined to seek help), others in the person’s life may notice the changed behaviors more readily and can entice the person into a treatment program.

Therapy and medications can work wonders.  There are many antidepressants on the market.  Two of the better ones are Zoloft™ and fluoxetine (generic name for Prozac™).  Both work to re-establish chemical balances in the brain.  Neither provides a sense of euphoria or elation, but rather allows the depressive to live without the debilitating lethargy that typifies the disorder.  These are maintenance drugs; one may likely be on them for the rest of his/her life.

Consulting with a mental healthcare professional is the very first step.  Once a diagnosis is established and a treatment protocol recommended, stick with it! The temptation is great, once on medication, to stop taking it when one feels “better”.  This is not what’s best for the depressive – within a short time of stopping medication almost all sufferers revert to the depressive behaviors.  But, keep in mind, there is hope, and the people who truly care will counsel and support. 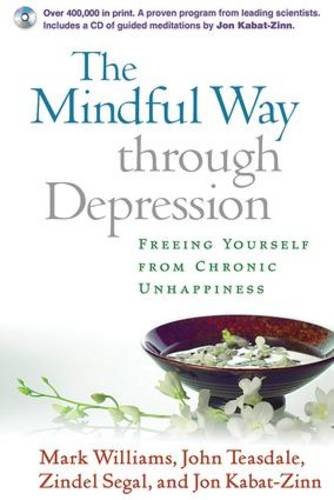 The Mindful Way Through Depression: Freeing Yourself from Chronic Unhappiness (Book & CD) Amazon Price: $21.95 $11.40 Buy Now(price as of May 13, 2016)
Next >> How to Get Creative Juices Flowing - Get Your Body, Mind and Soul on the Same Page