InfoBarrel is a writing platform for non-fiction, reference-based, informative content. Opinions expressed by InfoBarrel writers are their own.
InfoBarrel > Entertainment > Games > Playstation > PS4

Don't you hate spending $50 on a console game only to realize you end up not liking it and it never gets played.  Recently I held my breathe as I bought Assassins Creed IV:  Black Flag for the PS4 hoping that I wasn't making a mistake.  I really hate wasting my money.  Thankfully, it is the best game I have found yet for the PS4.  The game truly excels in game play, graphics, and the storyline.

The year is 1715 and you are Edward Kenway, a young, up and coming pirate.  The Caribbean has become a pirate playground.  You and your crew on the Jackdaw will pillage their way through the tropics following the main missions, but have plenty of opportunity for side exploits.  You will find yourself both at sea and on land as you are building your empire. 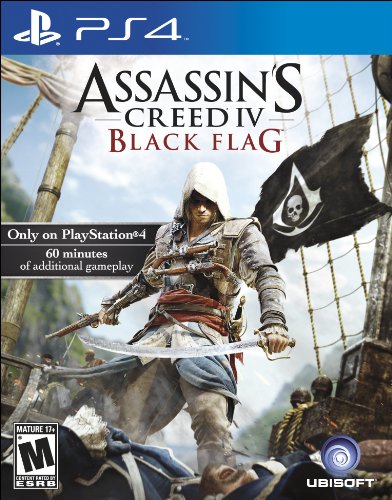 The game play for Assassins Creed IV:  Black Flag is great!  The thing I fear most about PS4 games is when the developers over complicate the game by creating all kinds of advanced moves using the controller; hold down L1 while pushing L forward, pulling R back, and then use R2.  Huh?

Assassins Creed IV does not suffer from this at all.  The use of the controller is very logical and overall simple.  The average gamer can get up to speed pretty quickly and begin enjoying the game.  It might take the novice console gamer, like myself, a bit more time but I have seen far worse games.

There are two primary types of game play you will encounter; on land and on sea.  When on land you will find yourself on one of many, many Caribbean islands.  You will have a main mission to complete but also plenty of opportunity for side missions to keep yourself from getting through the game too quickly.  You will be stealing from the royalty, assassinating bad guys, looting chests, discovering treasure maps and then using them to find the treasure.  All the while you are earning money to buy improvements to your equipment.  Your main tools of the trade will be two swords and pistols, although there is plenty of opportunity to use other weapons of the time.

While at sea, you will command the JackDaw.  Your major objective will be to take merchant ships, fight other warships, rescue castaways and pick up floating "loot".  Your earnings from your exploits at sea will allow you to upgrade your ship to make her more deadly.  You'll choose from a long list of improvements including strengthening your ramming ability, buying new broadside cannons, upgrading various types of cannon shot, and improving your hull.  Later in the game your acquire a fleet and can send it on trading missions.

If there was one thing that I was not expecting in this game was the beautiful graphics.  I have to say that they are the best graphics I have seen in any console game.  The amount of detail of the towns and jungle is incredible and worth the cost of the game alone.  You really see the graphics when you "sync", which is basically discovering parts of the map.  Each section of the map has a point that is high up and you have to climb to.  When you get there you "sync" and are given a 360 degree view of the area.  This is where the graphics really stand out.  Beware, the first couple times you climb high up, you may feel a bit of vertigo, I know I did.

Give it a Try

I can honestly say that I am having a great time playing Assassins Creed IV:  Black Flag.  The story line, game play, and graphics are all superb.  Plus, while the game can be challenging, it is not impossible like others.  I highly recommend you give it a try.