Get Attack of the 50 Foot Woman or Attack of the Giant Leeches cheaply from Amazon. You too can earn money from writing articles by signing up for InfoBarrel.
InfoBarrel is a writing platform for non-fiction, reference-based, informative content. Opinions expressed by InfoBarrel writers are their own.
InfoBarrel > Entertainment > People

Attack of the 50 Foot Mummy!

Death of a Cult Movie Icon

Almost from its very birth, the film industry has seen its share of bizarre or tragic deaths (Rudolph Valentino, Jean Harlow, James Dean, Marilyn Monroe, et al) by suicide, murder, or accident.  In these cases it was the cause of death that was notable.

In several situations, however, it is the discovery of the body and its attendant circumstances that qualify as strange.

Thus, in April 2011, another name joined the list of the unusual Hollywood dead.  She was Yvette Vickers, star of the so-bad-it’s-good sci-fi camp classic,  Attack of the 50 Foot Woman.

Credit: Playboy, 1959
Oh, I Hadn't Noticed You Were Dead
It is a commentary on our neo-local behaviors, gadding about and self-absorbed, that many of our elderly or otherwise disenfranchised die alone.  Sometimes their bodies remain undiscovered for days or longer.  This is simply because no one notices; the recluse has no friends or outside contacts, the agoraphobe shuns society, the homeless person has no social support system.  These deaths are remarkable only for the conditions in which the bodies are found.

The body of 82-year-old Yvette Vickers (stage name for B-movie and television actress Yvette Vedder) was found in her home in April 27, 2011.  Cause of death at the time was unknown, but later determined by the LA County Coroner as congestive heart failure.

It isn’t the fact that an elderly, former B-list actress and Playboy Playmate was dead.  No, the strangeness lay in the fact her death went unnoticed, and undiscovered, until a year after she had been dead!

That is correct: a year!

A neighbor, Susan Savage (an actress), noticed Ms. Vickers’ residence was suspiciously quiet (after a year of mail piling up, ivy over growing a porch, and other clear signs of property neglect).

She entered the residence and found Ms. Vickers dead and desiccated on the floor of an upper room of her Brentwood Canyon home.  The environment in which she expired mummified her remains.

This happens more often than one might think but given Ms. Vickers’ celebrity (albeit very minor) it would have been nice to think someone might have noticed her passing.  But she had no one, apparently, who cared enough for her.

Police estimated she had died nearly a year before.  This was an ignominious end for the once-vivacious Ms. Yvette Vickers.

Jazz Baby
Yvette Vickers was a remarkably beautiful and vibrant woman.
She was born (August 26, 1928) named Yvette Vedder to a Roaring Twenties-era jazz saxophonist father, Chuck Vedder and to an unremarkable woman named Maria.
Chuck, previously married to a woman named Ruth, had a son named Perry with Ruth.  Yvette did not know then she had a half-brother, and Perry only found out later in life about Yvette.

Her childhood during the Depression would have been much like any other working-class existence at that time.  Chuck was on the road as a musician (he died in 1995, aged 91), and his family traveled with him.  Times were tough.

Credit: William Reynold Brown, 1958; public domainShe passed through her formative years dreaming of becoming a writer, and she enrolled in UCLA.  Although majoring in Journalism, Yvette took an acting class to fill in a credit shortage.  She discovered a love of acting from this, and she switched her major to Drama.

Because of her natural beauty (her eyes regarded as her best feature) she was wooed by advertisers, and while still in college, made several commercials.  She moved to New York City, originally to become the face of White Rain toiletries, but returned to California to get her start in films instead.

Her first on-screen appearance (in 1950’s Sunset Boulevard) was uncredited.

Her first credited appearance, under her own given name of Vedder, was in Short Cut to Hell (1957).

The role which made her famous (or infamous, however one wishes to view it) came the following year when she appeared in Attack of the 50 Foot Woman (as Honey Parker, girlfriend of the the cheating husband of the film’s giantess).  This movie, among its ilk, stands tall as one of the best bad movies ever made.

The next year, 1959, she followed with a similar B-movie role as Liz Walker in The Giant Leeches.

She was Playboy’s “Playmate of the Month” in July 1959; her centerfold was shot by none other than horror/schlock-meister Russ Meyer.  [It is interesting to note when she did this pictorial she was shy of her 31st birthday (a ringing endorsement of her face and figure).]

She also appeared in several other men's magazines, and from her literal exposure in the skin magazines she “proved to have the perfect look for 1950’s drive-in films, along with episodic television,” film historian Alan K. Rode noted.

Credit: Playboy, 1959She played small parts in movies from 1962 on.  One of her better jobs was a bit role in 1963’s Hud.  She also appeared on Broadway during her heyday, and made multiple television starring guest shots, usually in TV Westerns.  Her last on-screen appearance was in Evil Spirits, a 1991 horror film.

Yvette had been married from 1953 to 1957 to Don Prell.  She wed Leonard Burns in 1959, but they divorced the same year.  She never had any children, and she never remarried.

She carried on a relationship with actor Jim Hutton for 15 years.  She allegedly had an “affair” with Cary Grant, but in reality this was probably cooked up by a publicist on Grant’s behalf (Yvette, stunning, would have made the perfect “beard” for Grant).

She dabbled in jazz singing.

She developed macular degeneration, an ocular disorder robbing her of all but her peripheral vision.

She had been writing her autobiography before her death.

Curse of the Mummy
Yvette Vickers had lived in her 1920s stone-and-wood home for decades.  It had served as a backdrop for many of her more famous modeling photos.  But as she aged, the house became dilapidated; its frame was even exposed to the elements in places.

Ms. Savage, her neighbor, said she became fretful something was wrong when she noted the deteriorating condition of Yvette’s home.  She spotted a large pile of yellowing mail in the mailbox (the box laced with cobwebs) in addition to spider webs across her front door.

Alarmed, Ms. Savage broke into the home, which she found in a shambles: boxes containing clothes, junk mail, and letters formed barriers.  She struggled upstairs; in the room where she discovered Yvette’s body was a small space heater, still on!.  She also found a cordless phone that appeared to have been knocked off its cradle.  Although she knew Yvette, Savage reported the body was unrecognizable (from mummification).

Yvette Vickers was buried without much fanfare.  Police could find no next of kin immediately.  However, Perry Palmer (her half-brother by Chuck Vedder and Ruth) was located.  [Palmer had been adopted by his mother’s second husband, hence the last-name change from “Vedder” to “Palmer”.]

He organized a small memorial service for his sister, and on June 3, 2011, he and a preacher gave eulogies.  There were twenty-nine attendees at the service, mostly neighbors and some family members on her father's side.

The 85-year-old Palmer reported that although he and his sister weren’t terribly close they did speak occasionally, and he said he admired her career.  He finalized by saying they’d last spoken in 1995 when their father, Chuck, had died.  “She was a recluse,” Palmer said, but he was uncertain why.

The end of Yvette Vickers is sad simply because this once vibrant, beautiful woman ended her days alone.

What compounds the tragedy is that, in this age of hyper-connectivity (e-mail, IM, text messaging, people exploring possible cell phone implants, etc.), it is a grand scale that social isolation has achieved (in some things such as basic human compassion) when a woman of modest celebrity can not only die in her home, but not be noticed as missing for almost a year!

Also, not to denigrate Ms. Savage’s role in this, but it does make one wonder: if she knew Yvette Vickers as well as she claimed, why did it take her almost a year to approach her home?

Who was paying Yvette’s utility bills (Ms. Savage noted a heating unit still working upon discovery of the body)?

Finally, the front line of reporting should have been the mail carrier—why did he or she not note something amiss rather than continue to simply place mail in an overstuffed box with yellowing, untouched material?

Maybe the lesson learned here is to perhaps look after one another a bit better than we do.

Attack of the Killer B's! 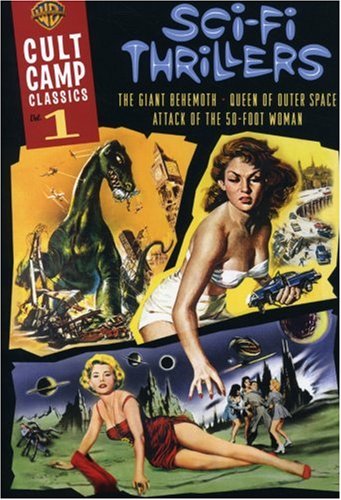 Trucker Man Amazon Price: Buy Now(price as of Apr 12, 2016)
Next >> The Rags to Riches Life of Dame Shirley Bassey