The Bilby is one of Australia's many marsupials. It has been chosen as a mascot by the Commonwealth of Australia Endangered Species Program. The bilby now represents all endangered Australian species. Forty percent of the world's mammals that have become extinct in the last 200 years have been Australian natives. There are now concerted efforts to save the native fauna that is left, many of which are unique to the continent. At Easter time, chocolate bilbies now compete with Easter bunnies and Easter eggs for the consumer dollar.

Bilbies are members of the order Peramelemorphia and are closely related to the bandicoot. There was once two species - the Lesser bilby and the Greater bilby. The former became extinct in the 1950s. The latter has been classified as 'vulnerable' in Western Australia and the Northern Territory, 'endangered' in Queensland and extinct everywhere else. The bilby is now a protected species.

Although once prolific and occupying around 70% of the mainland of the continent, the bilby is now found only on the edges of arid areas. The eastern bilby (Macrotis lagotis sagitta) is found in south-west Queensland (albeit in a small area) and across the Gibson and Great Sandy Deserts (in isolated colonies). It is also found in the Pilbara and Kimberley regions of Western Australia. The western bilby (Macrotis lagotis lagotis) is found in mulga shrublands and spinifex grasslands in the Tanami Desert in the Northern Territory. Each colony of bilbies is so isolated from other colonies, that disease and inbreeding is always a grave concern. 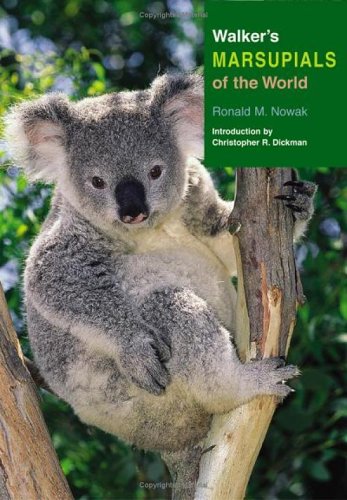 Walker's Marsupials of the World (Walker's Mammals) Amazon Price: $53.00 $9.95 Buy Now(price as of Dec 9, 2015)
Authoritative and engaging, this book focuses on marsupials; pouched animals whose unusual method of reproduction places them in a unique category among mammals.

The Greater bilby (Macrotis lagotis) is the largest of the bandicoot family. They are also known as Rabbit-eared bandicoots, Dalgytes and Pinkies. Because the bilby digs either for food or to create a burrow, the pouch faces backward to prevent it filling with earth. The female has eight nipples on the belly arranged in two facing crescents.

Males may weigh up to 2.5kg and are up to 55cm long. The tail can be 29cm long. The females are about half the size of the male. The pale blue-grey pelage is beautifully soft and silky. There is some fawn on the thighs. The belly and feet are white or cream. The tail is blue-grey for a few centimetres from the body then black for half the remainder of its length and white towards the tip. The three sections are very distinct. There is a bare spur-like tip to the tail. The naked tip is usually hidden from sight beneath the fur.

The bilby has acute hearing and an excellent sense of smell. However he has poor eyesight. The ears are huge and high manoeuvrable. They can be held flat against the body, rotated, stuck out sideways or folded in half. They have hardly any covering. It is thought that the ears help regulate the body temperature of the bilby. The nose is long and pointed. There is no hair at the tip allowing the pink skin to be seen. There are long, dark whiskers either side of the nose. Fine, black eyelashes surround the black eyes. 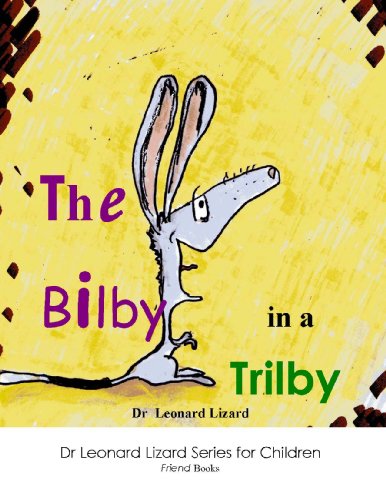 The Bilby in a Trilby (The Dr Leonard Lizard Series for Children Book 1) Amazon Price: Buy Now(price as of Dec 9, 2015)
Children will love this tale of two bilbies.

The bilby moves in a cantering motion. The hind legs move together. The front legs move alternately when moving slowly or together when moving more quickly. The tail is often held straight up like a banner. The hind legs are slender and longer than the front legs. There is a large middle toe on the hind legs similar to a kangaroo. The fore limbs are sturdy and strong. The middle three of the five digits are longer and have strong curved claws, specially adapted for burrowing.

Bilbies are very shy about leaving their burrows and often won't emerge at all if conditions aren't to their liking. They may have a dozen burrows which spiral down for up to two metres. Bilbies come out well after dusk and head back to the safety of their burrows well before dawn. They don't like strong wind, heavy rain or full moons. Burrows are used as shelter from the heat and as refuges from predators.

The bilby is omnivorous. It eats bulbs, seeds, fungi, spiders, insects, small animals and fruit. Most of its moisture needs are sourced from its food. They fossick on the ground, digging and raking with their sharp claws and utilising their (very) long tongues.

Bilbies make the most of good conditions and may produce four litters a year when sufficient rainfall ensures a good supply of food. Gestation is 14 days. This is one of the shortest gestation periods of all mammals. One to three babies are born. After 75 to 80 days in the pouch, they start to emerge and become independent in about another 14 days. Mostly they live solitary lives but small groups of three and four are also seen.

There are a few reasons why the bilby population is declining. In the late 18th century they were hunted for their skins. Rabbits were trapped and poisoned during this era and the bilby inadvertently was trapped and poisoned too. Burning, domestic grazing, deforestation and cropping saw changes in the types of food and its abundance. Introduced species such as the rabbit, cattle and sheep reduced the areas of native vegetation and prevented revegetation. There was more competition for the available food and rabbits also competed for burrows. Introduced predators such as the fox and feral cat made massive inroads into the bilby populations.

Luckily there are now a number of plans in action which will hopefully see the bilby re-established into its former areas. Zoos South Australia has a well organised breeding programme. Through the South Australian Recovery Team, they have begun reintroducing bilbies into five different sites.

In Western Australia, Peron Peninsula, north of Perth, has been isolated by a 3.4 kilometre electric fence. This is mainly to keep out feral predators. The Peninsula is now a national park and covers 1050 square kilometres. Project Eden has successfully reintroduced bilbies into the area. Currawinya National Park in Queensland will also be hosting new colonies of bilbies in the future. Other areas are also being considered as suitable sites for the reintroduction of this exquisite little creature.