J.Larson Check out my blog the Young Enviromentalist for more on what makes me tick & toc and follow along in my quest to live a more sustainable life http://youngenviromentalist.blogspot.com See you there
InfoBarrel is a writing platform for non-fiction, reference-based, informative content. Opinions expressed by InfoBarrel writers are their own.
InfoBarrel > Entertainment > Film > Television

Avatar: The Last Airbender A Review

Enter the world of the last airbender

The world of The Last Airbender is a fascinating one, filled with beautiful martial arts, larger than life characters and a grand adventure that spans the globe.  In the world of the Avatar the four elements of Air, Water, Earth and Fire can be controlled and used by the people.  Each element is related to a society that exists in the world the Fire Nation, Earth Kingdom, Water Tribes and the Air Nomads.

While not everyone in the various nations has the ability to control an element those that do can only control the one of the society they are born into.  But amongst all the benders in the world there is one called the Avatar and he/she is the master of all the elements, whose sole purpose is to maintain balance between the four nations and the elements they represent.  A new avatar is chosen when the old one dies with a cycle of reincarnation passing down knowledge and abilities to each new Avatar.  When the old Avatar is killed a new one is chosen a Airbender named Ang.  But before he can begin his training he disappears and during his absence the world falls out of balance.

A world at war is the one our young Avatar wakes into, he is only 12 years old and has only one element mastered.   To stop the war he must go on  journey with his new-found friends to master the other elements and bring peace and balance back to the Four Nations before it to late.

pole where the last water benders are at.  He needs to master the elements in a certain order water, earth and fire so that he can become the Avatar needed to end the war.  The first season is my favorite because it is the most lighthearted of the three.  The story gets more driven and focused on the consequences if he fails in the later seasons.  The first season is more about him finding how much has changed in the 100 years he was gone and how he has to change and grow in order to be the Avatar the world needs.  Along the way he picks up brand new enemies, new and old (really old) friends and the skills he needs to survive a much darker world than the one he left.

With another element under his belt and a better understanding of the world and how it works now you begin to see Ang really step into his role as the Avatar.  This season is characterized by Ang struggling to find an Earth bending master and then simply to master the element.  All the while he is being chased by even stronger enemies than those he has already faced including attacks from those he considered allies.  He also learns what he needs to do to stop the war but can he pull it off in time before one side gains an overwhelming advantage over the other.

limits and beyond.  This season has it all with betrayal, 180 plot twists, love, despair and the last desperate gambit to save to world.  Ang begins to master Fire in this book with misgivings as he has seen the chaos and damage caused by that element in his travels.  You see the last earth shattering revelations with enemies becoming allies and new powerful weapons of war are unleashed that may even be able to stop the Avatar with all his power.  Keeping you at the edge of your seat most of the season with only a few light-hearted breaks, Fire was a fitting end to the Last Airbender saga.  Though the end of the series does leave you wondering about a few questions that have been hanging the whole series.  I won't tell you what they are as I don't want to spoil it for you.

To sum it up Avatar the Last Airbender is an excellent  kid and adult friendly series that you can enjoy as a family.  The story has also continued with books, comics and a brand new series telling us of the exploits of Korra the Avatar that is after Ang. 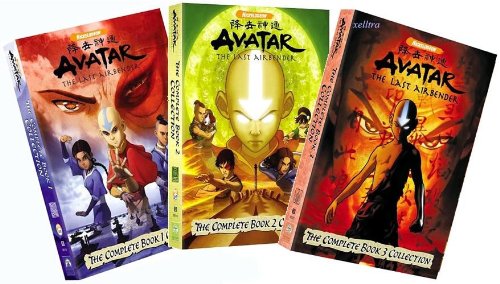 Avatar: The Last Airbender - The Complete Book 1-3 Collection Amazon Price: $109.99 Buy Now(price as of Aug 12, 2016)
Need I say more....
Next >> Lifetime Cable Channel Releases Yet Another Tell-All About Marilyn Monroe