Anime is far too often known for flashy art, spunky protagonists with bright colored hair and ridiculous clothing, and ridiculous plots. Despite all of the flaws of many anime series, one thing that many can agree on is that anime can still excel at characterization. Many of the best Japanese animation series imported to the West are known for their focus on well developed, sympathetic characters, and Azumanga Daioh is no different.

Based on a manga released in the late 90s, Azumanga Daioh was originally broadcast in 2002. The original manga was a four panel comic strip chronicling the daily lives and comedic exploits of a group of high school girls; reflecting this, the anime series originally aired in daily five minute sections. These sections were then compiled into 26 episodes for home release to DVD and other formats.

Its origins as a comic strip - and its original release format - are reflected in the series’ distinct lack of plot. There’s no real story arcs or drama in the series whatsoever, instead it follows random events in the lives of the characters throughout their high school years. It’s very character driven humor, and many of the later jokes and gags especially work because of the familiarity we gain with the characters and knowing their personality and quirks throughout the series. While the cast is mostly female, the actual stories are pretty gender neutral and are easily relatable to just about anybody. Most of the series’ humor is derived from the characters and their interactions throughout their day to day lives, but the actual execution is more exaggerated and cartoony than the original manga, which felt a bit more down to earth in tone. There’s also some bizarre dream sequences and other wackiness, which despite being different from the usual content of the series, still manages to work very well.

The series isn’t perfect and does fall flat sometimes. One of the biggest flaws is that the anime tends to come across as a bit more fan-servicey than the manga. The series’ one prominent male character is a someone that makes inappropriate advances towards his students, which is played up for humor value and instead leads to a lot of uncomfortable moments. And also, the nature of the series makes it a drag to take in bigger chunks - this is definitely a series to watch a little bit at a time.

But despite all that, Azumanga Daioh is mostly a heartwarming, funny look at high school life that anyone can relate to. Some of its jokes and situations are pretty Japan-specific but even then, the series includes plenty of notes to fill in the gaps for a Western audience. For those looking for something different than the usual anime tropes, Azumanga Daioh comes highly recommended. 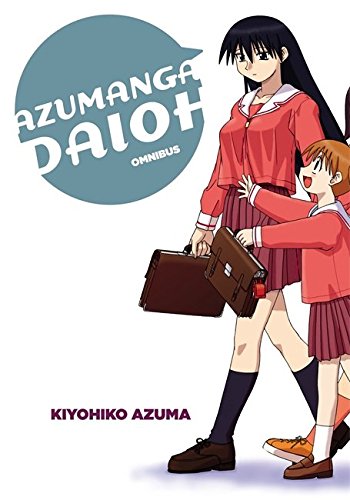 Azumanga Daioh Amazon Price: $25.00 $14.06 Buy Now(price as of Oct 31, 2016)
If you like the anime, check out the hilarious manga on which it was based! All four volumes collected in one great paperback.
Next >> Lifetime Cable Channel Releases Yet Another Tell-All About Marilyn Monroe