You can find, modern, vintage, and collector's Barbie dolls at Amazon.
InfoBarrel is a writing platform for non-fiction, reference-based, informative content. Opinions expressed by InfoBarrel writers are their own.
InfoBarrel > Lifestyle > Shopping

Your Barbie doll price may surprise you.

Of course as any Barbie doll collector can expect, dolls that are in perfect condition inside the original box in perfect condition will get a higher price. However, don’t be too quick to dismiss your well-loved Barbie that was played with by 5-year-old you. The right doll can still be worth money. In some cases, parts of dolls still have value for those that repair Barbie dolls.

What Increases the Barbie Doll Price?

Age – The older the doll, the higher the value. Vintage before 1970 tend to sell for higher prices.

Rarity – The more rare the doll, the higher the value. Rarity can happen over time as older dolls get played with and ruined, or because the doll was released in limited numbers.

Controversy and Mistakes – If it caused controversy or had a mistake in the collection or packaging, and was recalled from store shelves, it will have increased in value, even if it’s a more modern doll.

New in Box (NIB) – A Barbie doll still in its original box and never removed from that box (NRFB – Never Removed From Box) can be worth double or more than the same Barbie that’s been taken out of the box and put on display.

Complete Set – If a glove or earring is missing that was originally sold with your Barbie, expect the value to go down.

Popularity – Some individual Barbie dolls develop a following just because a lot of collectors like that particular doll. There’s usually no predicting which dolls will develop such a fan base, but when they do, their price goes up as soon as they are sold out.

These Barbie doll values are the actual sold prices from eBay auctions (not ‘Buy it Now’ prices) in 2012. eBay prices can be lower than auction house prices or private sales because you are taking a chance on the honesty of the seller in judging condition. However, this should give you a good estimate of your doll’s price. Ranges are given when multiple sales of similar condition items were recorded.

The first Barbie Doll came out in 1959 and was only sold for a few months, making her the most valued Barbie. She has white irises, arched eyebrows, and holes in her feet – a feature that’s key to identifying whether or not you have an original Barbie or a reproduction 1959 first Barbie doll. Mint condition originals can sell for thousands. But used and played with first Barbie dolls can still fetch a nice price.

Francie with Platinum Blonde Hair – with original outfit and shoes, out of box excellent condition - $150

Except for the original first release 1988 Happy Holidays Barbie Doll, this series is not one that has retained its value. Most sell for half to one-third of the original selling price if they are still new in the box. Since these have gone on the market, they have never risen in value. Too many people collect these and too many are made each year to make them collectable. Maybe in 50 years after everyone has given up and given them to their kids to play with, the Happy Holidays and Holiday Celebration doll prices will go up.

These are available only at toy and doll conventions and are limited in numbers. Only attendees get first access to these.

1998 Dorothy & Toto Barbie Doll from The Wizard of Oz – talking doll with light up slippers, used good condition, no box - $10

Tips for Selling Your Collection

Take and post several photos. Take clear photos of the entire doll and close ups of the face, body, and markings. Also take clear close ups of any clothing the doll will come with and the box. List each item in detail that will come with the doll. Research your Barbie doll before posting so that you have accurate and complete information. You want to post the year the doll came out, its name, and release number. Listing the hair color and style is also important, as the more rare releases do have more value.

When deciding whether to sell you Barbie collection as a set or individually on eBay, consider the price you can get for each. More valuable Barbies over $100 will probably earn you more money if you sell them individually. Barbie dolls that have little value individually, such as the Happy Holidays Barbies, will be easier to sell as a set.

Lastly, don’t be too quick to throw out pieces of vintage Barbie sets or broken dolls. If they are vintage, you could still sell them on eBay for some quick cash. Broken  dolls are bought as parts to repair other dolls in better condition. And some collectors will be looking for that lost and impossible to find tiny plastic pearl earring, hat, or fishing pole to complete a set. 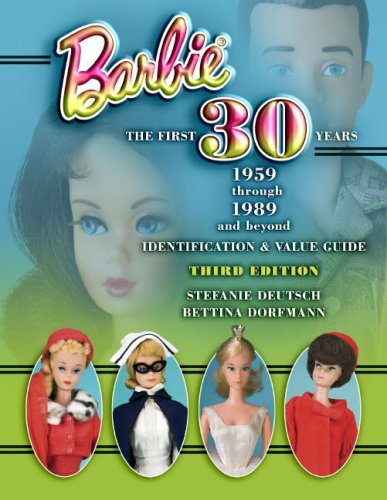