Bart Starr was born on January 9, 1934, in Montgomery, Alabama. He attended Sidney Lanier High School and decided to try out for the football team. After a short period of time, he wanted to quit the team. However, his father was a strict disciplinarian and disliked quitters. He demanded that young Bart continue to play. This would turn out to be an important moment in young Bart's life. Never again did he prematurely quit something and years later, in the National Football League, he was admired for never quitting. Bart became a high school star as a quarterback and was heavily recruited by colleges all over the country. Starr strongly considered attending the University of Kentucky to play for legendary coach Paul "Bear" Bryant. However, Starr eventually changed his mind and decided to play college football closer to home. He chose to attend the University of Alabama to play for coach Red Drew. He did not appear in a game for Alabama until his sophomore year and threw for 870 yards. Before his junior year, he injured his back and did not play much his senior year.

Despite having limited playing time throughout his college career, Starr caught the attention of the Green Bay Packers. The organization was impressed by Bart's intelligence, arm strength, and attention to detail. The Packers believed that Starr had the potential to be a successful quarterback in the National Football League. At the urging of Jack Vainisi, Green Bay chose Bart in the seventeenth round of the 1956 NFL Draft. Similar to his career at Alabama, Starr played inconsistently and for the most part, was a backup quarterback. His career seemed headed nowhere and it appeared as if it might be over. This changed in 1959 when Vince Lombardi took over as Packers coach and he watched film of Starr playing. Lombardi was impressed by Starr's ability to manage a game and decided to keep him on the team. His faith in Starr was justified that year when he took over the starting quarterback job from Lamar McHan. Bart never lost the starting job and was the Packers quarterback until he retired in 1971. That year, he led Green Bay to a 7-5 record.

The following year, Starr led the Packers to the 1960 NFL Championship game against the Philadelphia Eagles. Unfortunately, Green Bay suffered a tough loss, 17-13 and this would be the only postseason loss that the Packers would suffer under Starr's quarterbacking. This was also was the first year that Bart Starr would be named to the NFL All-Pro team. He accomplished this feat four times in his career. Starr led the Packers to NFL Championships in 1961 and 1962, both times defeating the New York Giants, 37-0 and 16-7. In 1965, Bart led Green Bay to another Championship, as they beat the Cleveland Browns, led by future Hall of Famer Jim Brown. This would be the first of three consecutive championships that the Packers would win directed by Starr. In 1966, he was named the NFL's Most Valuable Player and directed Green Bay to the first Super Bowl Championship game. The Packers faced the AFL Kansas City Chiefs, and soundly defeated them, 35-10. Bart was named the MVP of the game and the NFL proved its superiority over the AFL. The following year, the Packers beat the Oakland Raiders, and once again, Starr was named the MVP of the game.

This game would turn out to be the highlight of Bart Starr's career. The Packers would not play in another championship game or appear in the postseason during Starr's career. It would also be Vince Lombardi's last game as head coach and he became Green Bay's general manager. Starr suffered through numerous injuries the last couple of years of his career and retired in 1971. In 1972, he became the Packers quarterback coach and in 1975, became Green Bay's head coach. Unfortunately, Starr could not translate his success as a player into being a successful coach. He was fired after the 1983 season, with a record of 52-76-3.

Bart Starr finished his career with 24,718 yards, 152 touchdown passes, and a then NFL career-high 57.4% completion percentage. He is also second to Otto Graham all-time with a career passer rating of 80.5. He was a four-time All-Pro and a Most Valuable Player. Between 1960-1967, the Packers had a remarkable record of 62-24-4 and 5 championships. Despite these many achievements, Bart Starr never seems to get the recognition that he deserves. Part of the reason is that he played with many great players. Many of his teammates are in the Pro Football Hall of Fame and some people mistakenly believe that any quarterback could have achieved what Starr did. Many football historians and experts strongly disagree. Bart played with outstanding football players, but someone had to direct and instruct them. His great leadership skills were on display when he led the Packers to victory over the Dallas Cowboys in 1967. Green Bay had to drive 99 yards and score a touchdown to win with less than a minute left. This was the 1967 NFL Championship game and was named the "Ice Bowl, because at game time, the temperature was a dangerous 15 below zero. Starr calmly led the Packers' last drive and scored the game winning touchdown on a quarterback sneak. None of his teammates knew that he was going to keep the ball himself.

Starr also was fortunate to have Hall of Famers Jim Taylor and Paul Hornung in his backfield. Because of this, Bart's passing statistics do not seem that impressive, but he was a very accurate passer and was a great leader. He was the quarterback of one of the greatest dynasties in the history of pro football. He is also the popular player in the history of the Green Bay Packers. In 1973, the Packers retired his number 15 jersey. Starr was inducted into the Pro Football Hall of Fame in 1977. As great as Bart was on the field, he was an even better person. In 1969, he was named the NFL's Man of the Year, which recognizes the charitable contributions of NFL Players. Twenty years later, the Bart Starr Award was created in his honor of his contributions to humanity. Bart Starr is an underrated quarterback and is truly one of the greatest quarterbacks of all time. He has been and continues to be a great ambassador for the NFL. 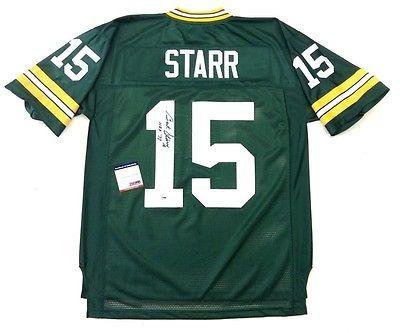 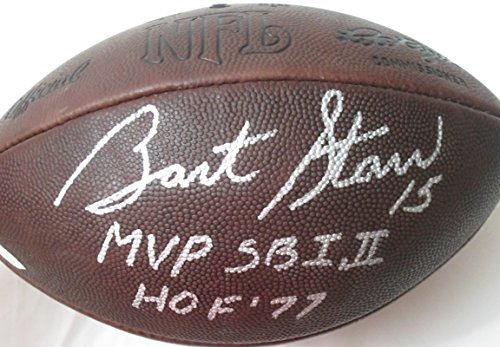 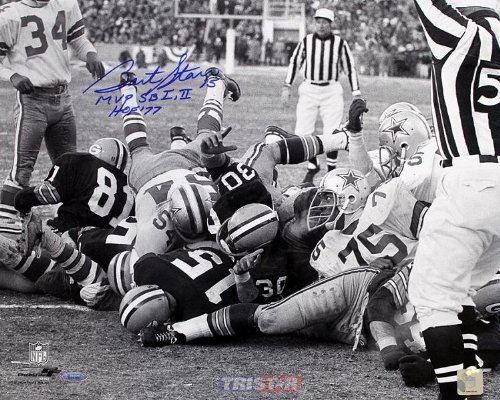 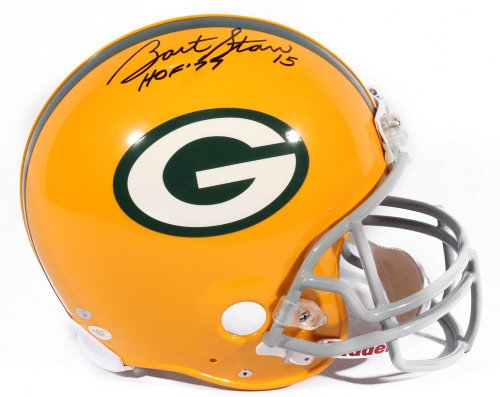