InfoBarrel is a writing platform for non-fiction, reference-based, informative content. Opinions expressed by InfoBarrel writers are their own.
InfoBarrel > Lifestyle > Productivity

Beat Your Brain: Increase Productivity By Understanding The Brain's Behavior

You Are Not Your Brain

When pondering whether he could prove his own existence, Rene Descartes once famously said, "Je pense, donc je suis," later translated into the Latin as "Cogito ergo sum."  In English, we translate this as "I think, therefore I am."  In essense, he claimed, he could demonstrate his own existence just by asking the question: if he did not exist, then who was asking the question?This makes intuitive sense to us: what are we, as people, other than a collection of our thoughts and our feelings?  "I think, therefore I am" becomes translated to "I am what I think."  We consider the brain as the seat of ourselves, of our personalities.  The brain becomes the person.

Your Brain Is Not Always Your Friend

Because of our belief that our brain and our thoughts are us, we too often let our brain do our thinking for us, in ways that aren't always in our best interests.  We operate on autopilot, taking actions which seem logical because we don't consider them carefully.  We listen to our brain when it tells us things based on limited or flawed information.  We react as though we were still existing in a world where daily survival was about hypervigilance and alertness, and not about concentration and higher thought.

Our brain may have our best interests at heart, but it doesn't always know what those best interests are.  By understanding how the brain wants to think, we can come up with some concrete tips for beating our brain and living more successful lives.

Tips For Outthinking Your Brain

In his book, Predictably Irrational, Dan Ariely talks about the ways in which people are affected by extra information around them.  One of the examples he gives talks about the value of your time.  As an example, let's say that the grocery store across the street from your house sells a gallon of milk for $10.  The one across town, ten minutes away, sells them for $4.  Is it worth the 20-minute round trip to save $6?  Now imagine that you're going out to buy a new laptop computer.  The store across the street sells them for $892 dollars.  The store ten minutes away sells the same model for $886.  Is it worth the 20-minute trip to save $6?  Is your answer the same in both cases?Our brain is constantly tricked by irrelevant information surrounding it.  The value of $6 changes in our heads depending on whether we're comparing it to $10 or to $892.  It's not designed to think in objective terms, but in relative terms.  $4 is a lot better than $10, so we feel a strong pull towards it.  In contrast, $886 is only slightly better than $892, so we don't feel the same kind of pull.  Maybe 20 minutes is always worth $6.  Maybe it never is.  Maybe the circumstances really do change the answer.  The important thing is to question why you make the decision that you do. 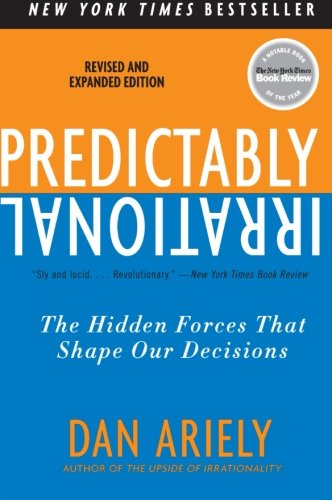 Predictably Irrational, Revised and Expanded Edition: The Hidden Forces That Shape Our Decisions Amazon Price: $15.99 $6.54 Buy Now(price as of Mar 9, 2016)

The brain is a biological organ.  Just like your muscles, it requires energy to operate.  When you are hungry or tired, it doesn't work as well.  Did you know that the brain uses 20% of your body's total energy?  If you only got four hours of sleep and skipped breakfast, would you expect your ability to lift heavy objects and run long distances to remain the same, or to decrease?In spite of our understanding that food and sleep are necessary for hard physical work, we routinely try to do heavy mental lifting or sustained mental effort on inadequate energy.  If you feel like your ability to concentrate is dropping off, ask yourself when you last ate or slept.  Sometimes, a healthy snack is what you need to improve your mental performance.

Most of your brain functions like a hyperactive toddler.  While you are trying to concentrate on a problem, your brain is constantly trying to butt in with irrelevant data about things happening inside of you or around you.  As David Rock puts it in his book, Your Brain At Work, "We are the descendants of people who paid a lot of attention when there was a rustle in the bushes."  Our brains didn't evolve for concentrated attention on a single issue, but for a constant surveillance of our situation.  Now, when so many of us work in jobs that require applied problem-solving, that constant voice that notices everything is a real distraction, like the child who keeps tugging on your sleeve to report that they're thirsty, their leg itches, the mailman is here, they want to know why rain happens, or they really like peanut butter.The most important thing to remember is that your brain is lazy.  It wants to distract you from the hard problem!  That's why so many of us are so prone to listen to our brains when they say, "There's a new email!  Go check it!" "Is Bob talking about me with Cindy?" or "Have there been any Facebook updates since I last checked (eight minutes ago)?"You can supervise your inner toddler.  When you find yourself wondering about emails, say to yourself, "If it was urgent, they'd call me," and wait to check when you come to a natural break point.  Jot down a note if you're afraid you'll forget it, but don't let yourself be distracted from what needs to be done, even when it's more fun to talk about peanut butter than do your taxes. 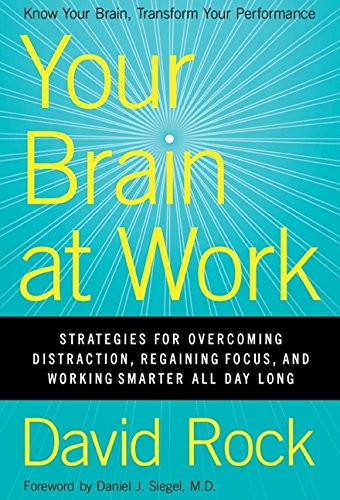 Your Brain at Work: Strategies for Overcoming Distraction, Regaining Focus, and Working Smarter All Day Long Amazon Price: $29.99 $12.00 Buy Now(price as of Mar 9, 2016)

Most of the work that we do with our brains, such as considering future needs, weighing our options, determining priorities, working towards goals, and social control, is done by a part of the brain called the prefrontal cortex.  Considering the demands placed on it, the prefrontal cortex is a lot smaller than you may think, only capable of holding a few ideas at a time.  Whenever you shift gears from one task to another, you have to unload and save relevant information from the prefrontal cortex to memory, then locate and load up data for your new task.  Returning to your original task requires another information load to restore your original data.

Credit: http://www.sxc.hu/photo/414300Just like a computer, your brain takes longer loading data from memory than it takes to work with it in place.  It also takes constant energy to keep an idea in your prefrontal cortex.  Multitasking, although it may seem more productive, almost always actually hurts performance and productivity, and elevates stress levels.  Gloria Mark, of the University of California, Irvine, found  that we face interruptions on average every eleven minutes in the modern office, and after an interruption it takes twenty-five minutes to regain our original focus.  Extrapolating from this, we can see that we are almost never at peak efficiency.Instead of breaking constantly to complete little two-minute jobs, focus on a single task.  When you are done with that task, you can look at any jobs that arose while you were working and handle them -- one at a time.

5. Shout Down the Negative Voices

In addition to distracting us and being lazy, our brain lies to us.  This isn't its fault.  One of its jobs is to categorize everything around us as good for us or bad for us.  If it can't prove that a thing is good for us, it assumes it's bad.  This means that our brain is constantly taking in partial information and drawing conclusions that are often very wrong and actively damaging to us.By reading meaning into what are actually random events, and looking for the reasons behind them, we can walk ourselves into some ugly patterns.  We assume that a coworker interrupting us was an aggressive act, which leads us to look for more aggressive acts.  When we are on the lookout for bad behavior, it's easier to interpret neutral acts as bad behavior, until we have worked ourselves into a place where every time Bob coughs, we feel it as an attack.There's a psychotherapeutic approach called Cognitive Behavioral Therapy (CBT), which uses reconceptualization, a useful technique in daily life.  When you hear that voice in your head saying "Bob is a jerk," or "This office is so unfriendly," or "This is unfair," don't just accept it as truth.  The fact that your brain is thinking it doesn't mean you have to believe it.  Ask yourself whether there's a different interpretation, one which might not leave you feeling victimized.  Change your conceptualization of the events, and the emotions attached to the original concept will fade.  You will be more relaxed, and eventually, the negative thoughts will be less frequent.

You Can Beat Your Brain

By embracing the idea that your brain is not you, and that its thoughts need to be evaluated and assessed just like you would evaluate any outside source, you can lower your stress level and live a happier life.  Good luck!

Next >> 5 Easy Ways to Get More Volunteers