Storyteller is a longtime blogger and content creator and is also a proud Mars One candidate! Check out the Nothing in Particular Blog for more.
InfoBarrel is a writing platform for non-fiction, reference-based, informative content. Opinions expressed by InfoBarrel writers are their own.
InfoBarrel > Technology > Computers & Tablets > Software

Okay, so now I have a guy with a hat. He just doesn't look very realistic yet – no face, no clothes, no hands. So let's start fixing that by giving him a face. I start by moving the hat back to Layer 2 (where I created it) and I'll retrieve it later. Then I go to Edit Mode and hit NUMPAD 3 to get the Right Ortho view.

Enough with the subdividing, right? But, really, making eyes out of triangles can be a little tricky. So I've got my subdivisions about where I want them and I start selecting the faces that I want to turn into eyes. I'm eyeballing it (pun intended) and eventually, I get something that sort of looks like eye shapes. Eyes are not perfectly round or perfect ovals, so what I have selected will work.

I extrude them inwards just a tad but not too far or he might end up looking like he doesn't have eyes at all. To get better control of the process, I hit E, and then use the numbers along the top of my keyboard to tell Blender the exact distance to extrude them inwards. Blender measures things using Blender Units. I have to use a negative number to extrude the eyes inward, so I use -0.1 to push them inward by one tenth of a Blender unit.

That looks good, so let's start giving those eyes some color. For this, I go to the Edit pane on the right side of my screen. I covered a bit about color in my last article. For now, I'll say that I need three materials: One white, one blue and one black. So I access the controls for Materials and create those. I zoom back in to inspect the eyes and I see I'm going to divide things up just a little more. Because my subdivisions are starting to get a little small, I take the easy way and use Circle Select (C on my keyboard) to select the faces I want.

And here's what he looks like right now when I move the camera into position and render him. No nose, no mouth, and still looks plastic. But I can start fixing that. So let's make a nose.

I start pretty much the same way as I made the eyes. I select a couple of the geometric shapes (in this case, a triangle and a quadrilateral) and start subdividing. I'm already starting to see where his nose will be, so I zoom in and start selecting the faces I will use. Again, it doesn't have to be extruded by all that much (enough to work in some nostrils maybe), so I precision-extrude it again by using a positive number this time; 0.3 Blender units.

That looks pretty funky for a nose, so now I select Point Select mode on the 3D View header (bottom of the 3D window), select the top point of the nose, and move it part of the way back by using the Grab tool and typing in a value of -0.2. This moves it back by two tenths of a Blender unit. I do some more adjusting with the rest of the points on the nose, moving each row back by tenths and hundredths of a Blender unit until I get something that looks like this:

Our pirate might have broken his nose at some point, but at least he has a nose.

So let's give this guy a mouth. I start selecting faces again, this time on the lower half of the head, and subdivide them. Now I've box-selected the area about where I'm going to put the mouth and I subdivide those. (There's a method to this, I promise.) So I hit C for Circle Select, and I can select large numbers of vertices quickly.

(Just a quick note: It is possible to overwhelm your computer's resources by trying to work with too many faces at a time. So I select my mouth in parts and apply the changes I want to make.)

Anyway, the main thing is to start getting the mouth. So I have a new, red material and I start applying it to the mouth area.

Well, that's what my pirate face looks like when rendered right now. Not all that great, right? So, obviously, I'll have to do something to outline the mouth. My black material ought to do it. (And don't forget to save your work frequently in case something gets fouled up.)

Okay, that's good for now though I'll probably make tweaks later, when I'm feeling less impatince. Let's move on to the next thing: giving him a skin color. So I go back to my standby, Box Select, and start selecting vertices. I also choose the skin color: in this case, he sort of looks like he's been using a tanning product that is too strong, but I go with it.

And hair. I make his hair black for simplicity, and when I start working with textures for my pirate, I'll make it look more like real hair. But for right now, I'm getting the basic color here.

At least he has a face now even if it does look like a design painted on an Easter egg. It's an improvement over no face at all, so I'll sign off so I can keep working on this. 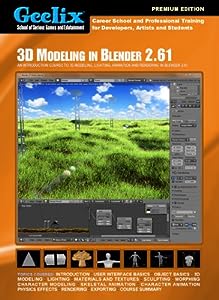