Ulf Andersson was the 4th highest rated chess grandmaster in the world in 1983. Andersson is a superb technical middle and endgame player who turned equal positions into wins. His style of play was drawish and hard to beat. He has a 74 percent draw record against former world chess champion Garry Kasparov.

Ulf Andersson was a chess player who was hard to beat. His style was positional and quiet. He played fe

Credit: Adam Raoofw games that produced combinational fireworks. He is an admired player, but there are few books of his game collections. His games appear in books to illustrate specific game concepts. His games are worth studying to improve chess.

Positional chess is a style of playing. Positional style players are known for slow quiet games, but can win with attacking combinations if conditions are right. They are tough to beat and have a lot of draws. Positional games build up small advantages in space and moves while limiting their opponents space and moves. It involves controlling central squares from a distance or by occupation. The object is to make future tactics and attacks more favorable. Because positional chess games often hinge on small advantages, successful positional players are exceptional endgame players. Andersson was known for his ability to win from equal positions. It has been said that his games stared where others were drawn.

Grandmaster Chess Strategy What Amateurs Can Learn From Ulf Andersson's Positional Masterpieces is written by FIDE Master Jergen Kaufeld and International Master Guido Kern and published by New In Chess.

Grandmaster Chess Strategy is a book of 80 of Ulf Andersson's best games arranged in 15 chapters. The chapters are: playing against two weaknesses, an advantage in space, control of the D file, prophylaxis, playing against the isolated pawn, the bishop pair, an original exchange of bishop for knight, fighting against the hedgehog, the positional exchange sacrifice, the positional queen sacrifice, the art of defense, the Catalan endgame, rook endings, rook and minor piece, and minor piece endings. 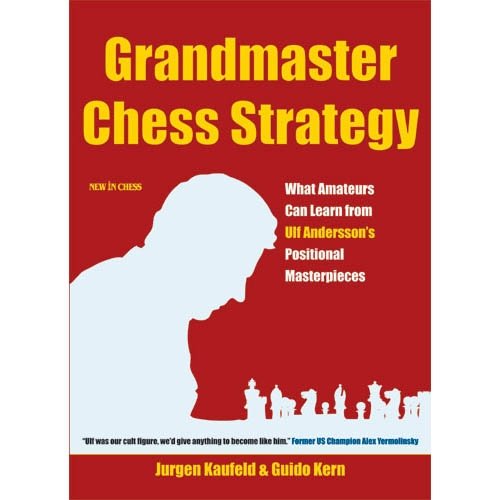 The book features complete games with annotations. When the game reaches a teachable point, the authors highlight it out and ask the reader to predict the move.

Players need a basic understanding of positional play before studying this book. It is best for intermediate to advanced players and not so much for beginners.

It is an invaluable book on several levels. It illustrates the best positional play by one of the modern masters of the style. It illustrates how to turn a small or equal advantage into a won game. It shows how to win endgames with a small advantage.

Many chess players don't like positional play and prefer an aggressive attacking style. Attacking players at the highest level are acquainted with positional play and able to use it when necessary. This book is a good book to learn the elements of this style of game and strengthen your game. It works because it gives complete games. It works because it shows the relationship from the opening, through the middlegame and into the endgame. Ulf Andersson,s games is one of the best to show this.