Special Feature Find Out How to Make a  (Fairly Significant) Online 'On-the-Side' Income through Writing
InfoBarrel is a writing platform for non-fiction, reference-based, informative content. Opinions expressed by InfoBarrel writers are their own.
InfoBarrel > Lifestyle > Education > College & University

Recording on a dictaphone your unviersity/college lectures & seminars (or practicals, classes etc.) is a great little method to re-cap on study material & content (giving you that edge on other students for when it comes to exams) -- where you may have missed or misheard a particular aspect or simply need further clarification to revise it as it didn't quite sink in the first time (or the more likely case that you are perhaps a bit hungover from the night before, so can't really take any of it in for the time being).

But, to carry out such a 'procedure' successfully you will need to get a top rated voice recorder -- as you don't want any potential mishaps occurring with a poor shabby one -- such as: failing to record clearly what the lecturer is saying, has a limited memory so it cuts out half way or isn't clearly organised so you don't what recording corresponds to what lecture (wasting a whole lotta time) etc. Here, however I have saved all the hard work of researching as to which is the best dictaphone for recording lectures for you in the showcase below. 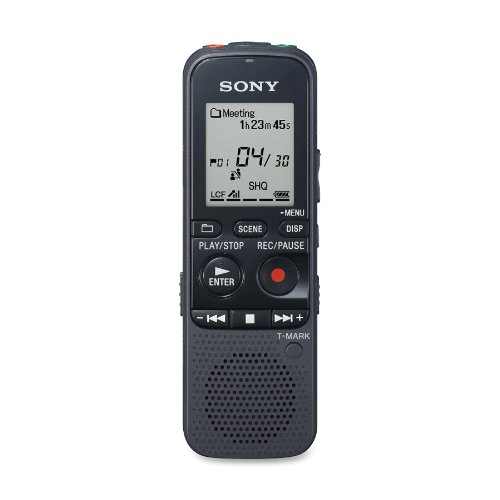 Sony Digital Flash Voice Recorder (ICD-PX312) Amazon Price: $110.00 Buy Now(price as of May 31, 2016)
This highly rated (& best selling) compact, lightweight digital voice recorder from Sony is the model that I actually went on to buy & I do think it is a pretty great piece of kit -- offering very decent value considering its price tag.

With a 2 GB memory, you won't really ever be short on space realistically (I managed to record a whole 10 week term of Economics lectures -- which I eventually just quickly & simply uploaded on to my iMac/ home PC /Dell Laptop (if you need more though you can buy a micro 5GB SD card for like an extra $10 -- to offer substantially more recording time) & with its quite clear navigation display (it obviously it takes a bit of getting used to at first, I had a play around with it for a short while -- getting to know the ins & outs of it, so there wouldn't be any mishaps -- but it is basically just 'Play', 'Record', 'Pause') and high quality recording (I have never had any troubles with crackling etc., pretty much every word is crystal clear) -- makes it a very decent option to take a look at.

A further note: is that it works with voice software (e.g. Dragon voice), so it can translate the recordings to text (never used it myself, although probably should have done). Also, it saves the files as MP3 Audio files. To power, it requires 2 AAA batteries -- Sony do provide you with the first bundle though. 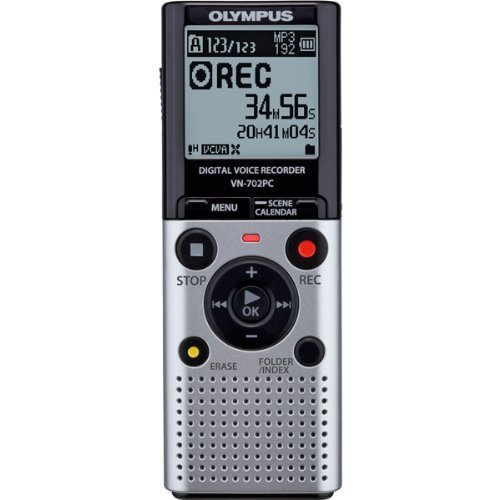 Olympus VN-702PC Voice Recorder Amazon Price: $159.99 Buy Now(price as of May 31, 2016)
Another great digital voice recorder is this Olympus VN-702PC, which like the Sony offers you a 2 GB memory (which is claimed to be 823 Hours of recording time) along with the SD slot feature -- but offers some pretty cool features that are useful for students trying to record lectures etc.

Obviously, being compact & lightweight means it is extremely portable, no issues there. It also has a fast email connection via USB as well as a quick MP3 & WMA file transfers to PC. Moreover, it has a fitted headphone jack with adjustable playback speed which I found particularly great with recordings (with the Sony) -- as you can get through a 2 hour lecture in like 75 minutes (saving you 45 minutes for more important tasks). (Bonus Tip: set the play speed to like 1.5 x on youtube lectures too).But, the aspect I think is really useful is the 'Calendar Search Function' allowing you to quickly match up what recording goes with what lecture -- so you don't have to spend time working out which is what. Also, being 'voice activated' is a pretty cool aspect too -- although not really sure that this would be particularly useful in a lecture environment. What is important though is the 'Scene' select meaning it optimizes recording depending on the environment you are in -- a lecture hall or a conference room -- it adapts the microphones to optimise the sound quality. 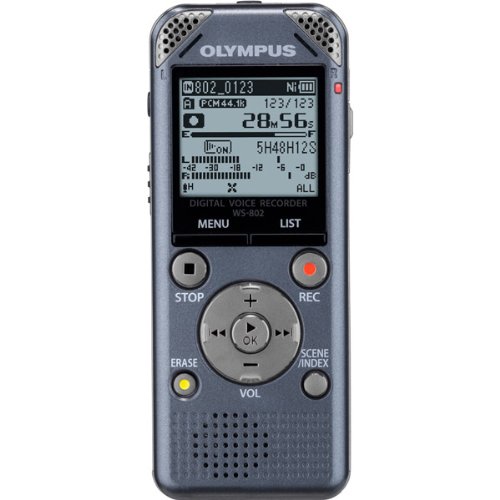 Olympus WS-802 Voice Recorder Amazon Price: $159.49 Buy Now(price as of May 31, 2016)
I wanted to include this model for those who basically want to get hold of the 'all singing & all dancing' gadgets and gosh does the Olmypus WS-802 deliver. It has literally everything covered a student could want from a Digital voice recorder & so much more.

To start it offers 8 Gb of memory which translates to over 2000 hours of recording, so basically you can record every single lecture, seminar, practical you ever have had on a three/four/give year college/university degree course and still get no where near full capacity. Also, the recording quality is pretty much unrivaled where it has "two internal directional condenser microphones" -- hence there will be next to no background noise of other students coughing & murmuring -- furthermore you can through the Noise cancellation feature actually edit & dampen unwanted such noise, for crystal clear play back. Moreover, it comes with an integrated voice balancer function that allows in tandem with 'scene' selection to compensate on distance -- this is what makes the WS-801/2/3 so great for lectures.

You might also think because it is expensive it will be difficult to operate, you would be wrong it is super simple to use where it has a red light to indicate recording & easy user interface.Moreover, it has a lot of the features that the VN702PC has (but improved & adjusted) such as with the 'USB direct' for both use on both Mac & PC -- for ultra fast file transfer & voice activation instruction -- moreover it charges the battery (it works on one AAA alkaline battery, that's rechargeable -- saving you the maintenance cost of replacing AAA batteries).With multiple file format recordings -- WMA, MP3, PCM for even further versatility. It also comes with the calendar search function as well as index marks of up to 99 -- allowing you to give a brief description as to what each recording & lecture was about.

Like the changeable adjustable playback speed saves you time -- this model also has a playback function whereby it will skip sections where there is no speaking -- making lectures seem seamless in speaking, saving you yet more time (you won't realise how useful this actually is until you start properly using a dictaphone for recording & playing back lectures). In all, this is really well reviewed device that is pretty much the best digital Dictaphone for recording lectures that you are going to find on the market.

Which model will you get & why? Also, if you have any questions, comments, concerns regarding either the article 'Best Dictaphones for recording lectures' or about any of the models mentioned above (particularly the Sony ICD-PX312) then please do not hesitate to make them in the comments section & I will be sure to get back to you as soon as possible.

Next >> 10 Jobs You Can Get Without A College Degree