If you like word games, here are the best ones ever invented. If you are strictly a Scrabble player, you might want to branch out and consider these other games. If you don't play Scrabble, you are missing the greatest word game of all time.

The best word game ever invented, by far, is Scrabble. Let us all bow down to the great Alfred Mosher Butts, who invented it in 1938[1]. Scrabble combines strong word knowledge, spatial skills, strategy, and luck to create the most interesting, and sometimes, frustrating, word game of all time. Scrabble is so popular that serious players play in week-long tournaments and are ranked, just like chess players. But unlike chess, the element of chance (when drawing tiles) in Scrabble introduces the possibility that an average player, if they draw the right letters, can beat a world champion.

BuyWord is a strategy game that combines word skills with making money. You buy letters and then attempt to make a profit from your “investment” by using the letters to make words. The longer the word, the more money you make. This game won the 2005 GAMES Magazine Game of the Year, and it is easy to see why. Like Scrabble, it combines word skills with strategic thinking. The idea that some letters are more valuable than others exist in Scrabble as well. But BuyWord introduces the ability to buy letters, which is a neat twist. 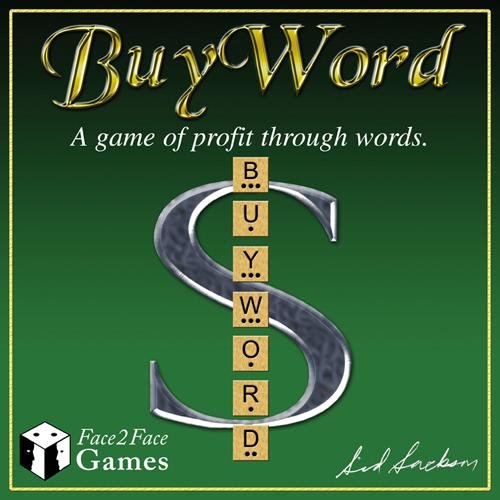 This is a classic bluffing game for word nerds. In college, we called it the dictionary game. Unlike the other games mentioned, this game is more of a party game that you play in groups. Everyone writes down a believable sounding definition of an obscure word. Then, everyone  guesses which is the correct definition. You get points for guessing correctly or for having your made up definition selected. One person in the group per turn selects the word and writes down the real definition, which often is crazier then the made up definition.

Boggle is another classic word game. Like most great games, it is simple and intuitive. You begin the game by shaking a covered tray of 16 dice, each with a different letter printed on each of its sides. The dice fit into a 4×4 tray, with only the top letter of each cube displayed. You have three minutes to search for words that you can create from adjacent letters. You can use letters that are next to each other or diagonally neighboring. The longer the word, the more points you get. Also, you try to find the most obscure or difficult to find words because if any other player finds the same word that you do, neither of you gets points.

The appeal of this game is that you can play anywhere and at 3 minutes per game, it is short. This game is addictive, especially when you play online. In fact, I don’t play it online anymore because it makes my carpal tunnel symptoms worse.

If Scrabble in two dimensions is great, then three dimensions must be even better, right? Well, not quite, but Upwords, the so-called 3D Scrabble, still has merit. As the name suggest, you can stack letters on top of each other, providing another way to make words. The board is smaller than a Scrabble board though, which makes it difficult to create longer words. Unlike Scrabble, the letters all have the same value. You increase your score by stacking letters higher. 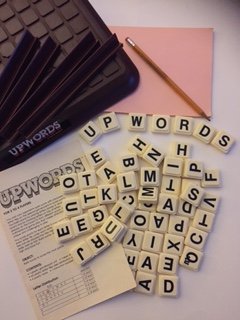