These favorite titles have been kid and parent tested.

Monster Train  is a pop-up picture book with wonderfully detailed pictures.  It tells the story of a a boy named Billy who has to find his way home from a fair.  His adventure back to his family takes him on the Monster Train.  On the way he encounters ghosts, vampires, pirates, witches, werewolves, and many more classic scary creatures.

Each character is illustrated with just the right amount of ghoul to delight, but appears friendly enough so younger readers can go to sleep after the book is closed.

Each page is richly illustrated, showing enough action to keep young readers fully engaged.  There are several flaps to open on each page, some with additional pictures and some with jokes.

Scary Street tells the story of a town where everyday is Halloween.  Each character represents a person in the town, doing a job familiar to young readers, but with a scary twist.  Scary school has a witch as a teacher, Dr. Frank N. Stein is the vet that takes care of pets, a werewolf delivers the mail, with eight characters in all.

The illustrations are bold and richly colored.  One character dominates each page with a moveable pop-up feature.  Kids often enjoy moving the page back and forth to really see the action of the pop-up.  The pictures are scary, but there are funny elements to each illustration to temper the scariness.

Scary Street was written by Christine Tagg and illustrated by Charles Fuge.  The book was published in 2008 by Borders Press and produced by the Templar Company. 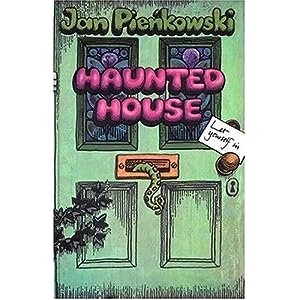 The Haunted House takes the readers on a tour of a spooky old mansion.  Underneath the staircase monsters hide, there is an octopus in the kitchen sink, ghosts wait in the closets and all along the tour a black cat follows.

The illustrations are scary, but have a funny twist to them.  Kids relish the creaky saw details, but aren't kept awake by the images.  The monsters appear friendly in the pictures and make young readers want to read the book over and over.

The Haunted House by Jan Pienkowski was originally published in 1979 and has been released again in 2009 by Candlewick.

Credit: Picture by Simon Howden Taken from freedigitalphotos.net
Next >> A Dark and Controversial Crime Fighter