Seven Tips for Improving Your Game

If you are a casual scrabble player who wants to become a better player or even play competitively in tournaments, use these seven tips to elevate your game immediately.

Learn the 2 and 3-Letter Words

Learn as many of the X, J, Z, and Q words as you can. You can rack up points quickly with these letters, but only if you have an arsenal of words in your playbook. Focus on words 5 letters long or shorter, as you are more likely to play them than the longer words.

In particular, focus on the Q words that don't need a U. For example, here are a few:

The easiest way to play more bingos (playing all seven letters and earning 50 bonus points) is by studying the list of frequently occurring bingos based on letter distribution. Certain letter combinations occur more often on your rack, so it pays to know the bingos you can make from these combinations. Here are the 10 most common letter combinations:

These racks make dozens of 7-letter bingos (and 8-letter bingos when played through a letter already on the board). For a list of these bingos, search the web for scrabble bingo stems. One source is Scrabble Word Finder.

To make sure the frequently occurring bingos show up on your rack frequently, balance your rack every turn. Keep a mix of vowels and consonants.

For example, assume you have the following rack:

When you play BREW, your leave is IAO, which is vowel heavy.

When you play BOW, your leave is IREA, which is more balanced and thus a better leave.

A good mix of vowels and consonants is not your only concern. Make sure the letters in your leave go well together, like these letter combinations:

Finally, the game situation ultimately determines whether a leave is good or bad. For example,  BL might be a poor leave if you are near the end of a game and most of the remaining letters are consonants.

Track Letters as They Are Played

You should track letters as they are played, for two main reasons:

If you are new to tracking, I suggest first tracking only the most important letters (S, J, Z, X, Q, U, and the two blanks). Even this limited tracking will help you.

Set Yourself up for Big Plays

Another advantage of tracking letters is that you can occasionally set yourself up for a big play. For example, if you know that you have the last S and both blanks have already been played, you  can create an opportunity for an S hook on a triple word score, knowing that your opponent can't use that hook. This kind of opportunity does not arise often, but when it does, it can give you a big advantage.

Know When to Open and Close the Board

When you are winning a game by a comfortable margin, your priority is scoring points and closing down the board to limit scoring opportunities for your opponent. The C and V are great letters for closing down the board because you can't play any 2-letter words parallel to them. When played in the right spot, these letters can shut down the scoring opportunities for your opponent.

Conversely, when you are behind by 50 points or more, you want to keep the board open, to give you the best chance to score points.

How to Get Really Good

Once you have mastered these tips, the best way to get even better is to grow your word knowledge. You can do that by memorizing words (boring!) or playing more scrabble (my preferred method). Either way, happy scrabbling! 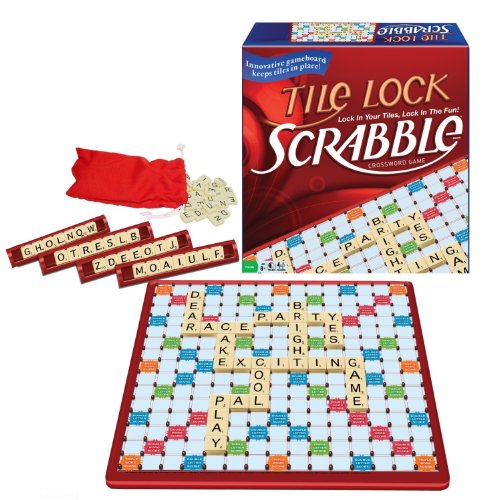 Tile Lock Scrabble Amazon Price: $19.99 $12.20 Buy Now(price as of Oct 11, 2014)
In this Scrabble version, the tiles lock onto the board, so it makes for a good travel version or a game to play with young kids who tend to bump the board often.
Next >> Tokaido Boardgame Review