If you are anything like I am you hated wishing your kids were a little bigger so they could do more, being that they grow up so fast anyways. But when they are under the age of two most kids are just too young for all the fun stuff “your” inner child is just dying to buy. For many parents, especially dads, some type of ride on toy like a four wheeler is usually at the top of the list. I know my kids had little toddler four wheelers before they we’re old enough to walk and once they hit about 2 ½ the search began for their first battery powered four wheeler. Now, I’m assuming since you are reading this that you have a child or grandchild that has finally reach that age where the real fun can begin. 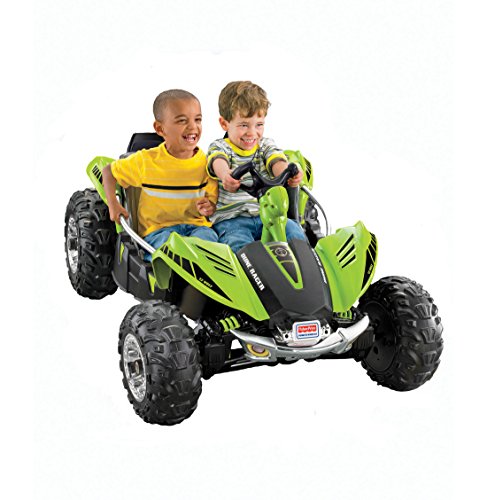 Things to Consider Before Buying

By doing a little internet searching or looking in a few local stores you will quickly see that there are dozens of different electric four wheelers available. And at first glance it is hard to tell why one might be better than another but there are many differences. One of the most obvious is the size of the four wheeler. Battery powered four wheelers come in lots of sizes but unless you want to end up buying two or three of these things over the course of the next few years you are better off buying one of the bigger ones. Doing this might mean that it is a little big for younger kids but in the long run they will get more use out of bigger ones.

Another option you should look out for is how many gears the four wheeler you are considering has. Some of the less expensive ones only have one gear. Unfortunately this is kind of like buying one that will be too small in a year. The quads that have two gears are perfect for a wide range in ages. For example the four wheeler I bought for my oldest son had two gears. He was almost three when we got it and for about the first year the first (slower) gear is all he used and was plenty fast for him. Then buy the time he decided that it needed to go faster he had mastered steering and braking. The funny thing is it was like he got a brand new toy when we started letting him use the faster gear.

Another option that I personally like is the reverse gear. It isn’t really necessary but it really adds to the realism for the kids and you would be surprised how good they get at changing through all these different gears and maneuvering around the yard. So after considering these different options it really narrows the choices you have when it comes to buying but in the end you will have spent your money a little more wisely.

There are a few different models with the options mentioned above but I will only mention two of what I consider the best. And the only reason it is two instead of one is because so many people like buying their little girls pink toys I figured I should mention the best model that comes in the color pink. Actually while I’m talking about it I will just start with this model.

A very sharp realistic looking battery (rechargeable 12 volt battery and charger included) powered four wheeler that is recommended for 3 to 7 year olds. It has two gears with speeds of 2 ½ and 5 mph. There is a lockout control for the second gear that is held in place by screws, so unless your three year old can use a screw driver it is pretty much child proof. Of course once you remove this lock your child is free to shift between the gears as desired. Also this model comes with a reverse gear. To make the four wheeler go in reverse the shifter must be held in the reverse position. Once they let go it automatically goes back into first gear. Braking is also automatic with this model all they have to do is let up on the foot controlled accelerator. The all terrain wheels are great on all surfaces including grass, gravel, pavement and dirt though depending on the weight of the child (85 lbs weight capacity) like most battery powered toys it will have a hard time going up steep hills or smaller hills with wet grass. (See the last paragraph about some accessories that can help with traction.) There is a little assembly required but should take less than a hour to complete, this included applying the floral stickers that come with it. And one other thing that I feel should be mentioned is that this unit is made in the USA so it isn’t cheap Chinese junk. 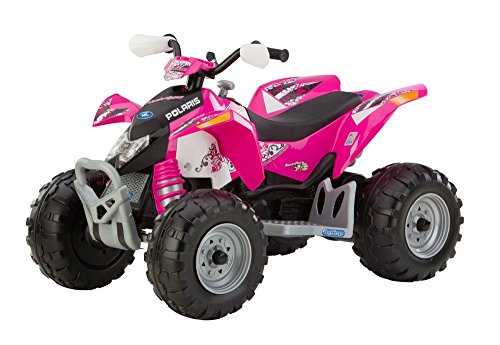 Ok, now let’s take a look at one the coolest little four wheelers on the market

An extremely cool miniature model of the real Kawasaki Brute Force utility ATV. This Kawasaki ride on toy has cool camo graphics an on board heavy duty shovel and even a cup holder. All of which help power the imagination of the little guys or gals driving this beast. It is recommended for kid’s ages 3 to 6 years old but has a max weight limit of 130 lbs so really just about any kid could ride it. Powered by a 12 volt rechargeable battery (charger included) it has two speeds 2 ½ and 5 mph with a lock out for the faster gear plus it has reverse.

The all terrain tires are good on most surfaces including grass, pavement, gravel, dirt and even a little mud. This model has automatic brakes, once the foot powered accelerator is released the four wheeler stops. There is some minimal assembly required but should take less than a hour to finish. All Power Wheels come with a one year bumper to bumper limited warranty. Also a neat fact about Power Wheels products is that they are kid tested in their own in house Quality Assurance Test Track as well as the Fisher-Price Play Lab. They also have a in home test program that helps them decide on the age appropriateness of their products. In all you really can’t beat the quality and affordability of their products. 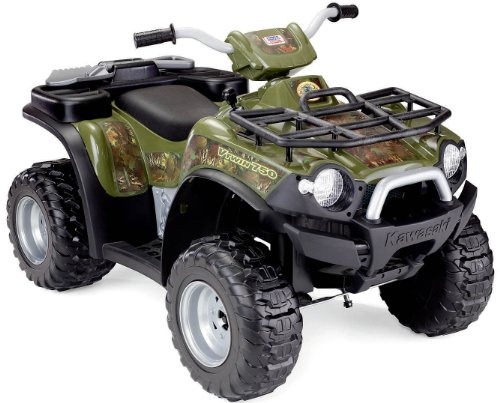 Accessories and Extras You Should Consider

A few other things you might want to consider getting for your new four wheeler is one extra battery. The battery on most of these ride ons will only last about an hour at most so if they are going to ridden a lot having a backup battery is worth considering. Especially since it takes several hours for a battery to charge.

Another item you should definitely look into is traction bands for the tires of your new toy. If you have never been around these toys much you might not realize that the tires are just hard plastic. So they have a tendency to slip (spin out) in grass and on blacktop when they first take off. There is a company called TractionBands.com that makes large rubber band like rings that fit over the tires of battery powered toys. They make many different sizes for just about all makes and models. It is highly recommended that you get these inexpensive bands. Without them you will find that the tires eventually wear out, they can be replaced but that is much more expensive.