TV as we know it is far gone. Nowadays media streaming took its place and it gets better and better: not only you get to stream your favorite on-demand content (TV shows, movies, sports, games and more) on your HDTV but also you will not be forced to make your daily plans around your favorite TV show but the other way around. Of course, apart from the on-demand streaming you can get the live streams too, which are only available once (e.g. for a football games live transmissions).

Streaming media content is playing media from internet (movie streaming sites, clouds) directly on your TV. The streaming media player (or media streamer device, or digital media device) is a certain type of device you use to stream audio and video content to your TV. It will allow you to access a variety of online apps so that you can enjoy Netflix, Prime Instant Video, Hulu Plus, music, photos, games, and more on your HDTV. Some

Why should you buy a media streaming device:

A streaming media device will be able to replace the crowded small screens and tiny speakers with wide HD TV screens and home Dolby surround systems. At the same time, you will be able to play content from a huge number of sources using your computer.

Why Chromecast is the best streaming device?

Chromecast seams to be the best of its kind on the market for several reasons:

- it is a low-cost media player (relatively inexpensive compared to other options, such as Roku, Apple TV or Samsung GX-SM530CF Cable Box and Streaming Media Player)with infinite possibilities;

- Chromecast can also be plug it into an audio/video receiver that has an HDMI input;

- up until 2 months ago (2014, Marh), Chromecast was only supported in the United States. Now it is available in 11 additional countries: Canada, Denmark, Finland, France, Germany, Italy, Netherlands, Norway, Spain, Sweden and the U.K.;

- it is not mirroring (it does not display what is on the device's screen), but streaming content (e.g. stream movies online). That means it fetches the content from a website or cloud service itself, not from the controlling device you're using (smartphone, laptop, tablet, PC). This is a great advantage because it allows you to use the controlling device for anything else (browse the web, play a game, check your social apps, write a book report, put the device to sleep, turn the device completely off) while the media content is playing on TV; it also helps you save your battery life as the actual streaming is done by Chromecast and not by the controlling device;

- every device connected to the Chromecast on the same network can take control of playback, adding to the queue (what's going to play next). So basically, you can use a tablet to order the play of an episode and then use a smartphone to add the following episode to the queue;

- you can connect it to an audio device/receiver and play music from a music streamer (e.g. Spotity, Pandora, Subsonic) continuously without turning on the TV;

- although Chromecast is not a streaming device of local digital content, you can use it for playing digital music and videos that is stored locally on your network drives or computers too. To do it, you need to use a simple work around: open the media through a Google Chrome browser tab (you might need the PLEX Media Manager, which you will find free for download on the internet);

- recently (2014, February) the SDK has been released to developers. This means that the device has the potential of being put to amazing uses in the foreseeable future by 3rd party apps and will soon allow streaming of anything on the PC or phone to the TV;

- it’s easily hidden away in the back of TV;

- there are no additional service fees or subscription fees other than services that you choose to pay for (such as Netflix or Google Play). 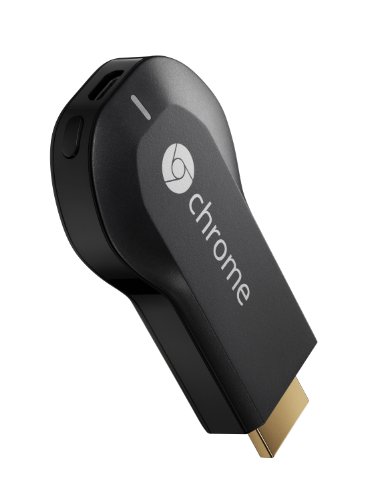 Before deciding to use Chromecast you should be aware of some limitations:

- the controlling device and the streaming device must be on the same WIFI network. For obvious reasons, any ethernet (wired) connected device, even though it's on the same network, it will not work;

- if you have a HDMI 1.4 compatible port on the back of the TV than the device can be powered by the HDMI port alone. Otherwise, the Chromecast requires power through USB connection or directly from your wall outlet. The required peripherals are provided in the retail box;

- if you want to play from a local storage media directly, you need to connect the storage media to your PC/laptop or smartphone and stream from there.