See a complete list of my featured articles here: "Featured Articles on InfoBarrel" If you enjoy writing and would like to earn money with your articles sign-up for InfoBarrel today!
InfoBarrel is a writing platform for non-fiction, reference-based, informative content. Opinions expressed by InfoBarrel writers are their own.
InfoBarrel > Lifestyle > Religion & Spirituality > Christianity

Beware of Christians: A Thought-Provoking Film for Both Christians and Non-Christians

Where Does Jesus Fit in Christianity

The documentary "Beware of Christians" begins with the following quote by Brennan Manning; "The single greatest cause of atheism today is Christians who acknowledge Jesus with their lips and deny Him by their lifestyle." So, it is with that conviction that four American Christian college students embark on a 5 week European trek in hopes of discovering what it is Jesus truly wants from their lives. These young men all struggle with the same temptations as everyone else but they are seeking to live for something greater.

Jaded by what they've experienced in their own homes, churches, and Christian colleges, these four young men; Will, Alex, Matt, and Michael examine their experiences and feelings about the idea that "sometimes it's tough to see where Jesus fits into Christianity." Throughout their European travels, these four young men interview several people, learn several lessons, and have open and honest discussions with each other about what it genuinely means to follow Jesus.

Beware of Christians: A Thought-Provoking Film for Both Christians and Non-Christians

"Christians are Busy on Sundays"

This film is filled with thought-provoking questions and it takes a frank and fresh look at what it really means to be a Christian. For example, when a young woman was asked what the difference was between her Christian and non-Christian friends, she said the only difference was that the Christians were "just busy on Sundays."

Others who were interviewed seemed to share the same opinion, practically calling their Christian friends hypocrites. They all seemed to be turned-off to Christianity because of Christians. So, sadly it seems as though the opening quote by Manning was accurate.

A 5 Week Trek for 4 Sojourners 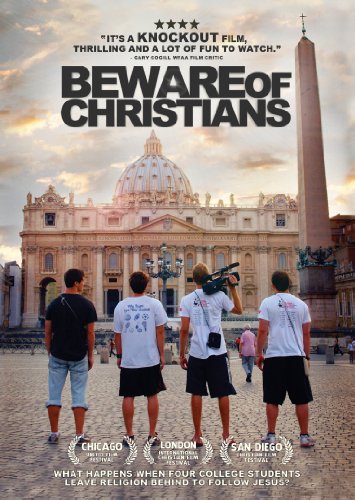 Beware of Christians Amazon Price: $9.98 $6.99 Buy Now(price as of Nov 12, 2015)
The documentary begins with the four young men sitting at a table discussing their trip and the reasons for going. They all grew-up in upper middle class Christian households and all identified themselves as Christians. But they also all felt as though the lives of typical American Christians were somehow lacking in truth. Alex said the following; "The verse that seriously messed-up my life was Matthew chapter 7 verses 22 and 23" [Many will say to Me on that day, "Lord, Lord, did we not prophesy in Your name, and in Your name cast out demons, and in Your name perform many miracles?" And then I will declare to them, "I never knew you; DEPART FROM ME, YOU WHO PRACTICE LAWLESSNESS."] Matt followed-up by saying; "I know I'm a 'Christian,' I just don't know if I'm following Jesus." Will said he grew-up going to church and Christian camps every year, and always heard the same message. So, the group question was how could they get away from all the home expectations and ideas of what their family, friends, and church folks say is a Christian, and learn what Jesus says. They all agreed that sometimes you can get "churched-out" with all the same trips, sermons, and other stuff. So the group agreed to go to Europe on a five week journey where there would be no home distractions. As Michael playfully whines, "I had a lot of great plans but recently Jesus ruined all of them."

The Trip and the Lessons

After a long plane ride the group decides to take advantage of an airport that is practically vacant and take photos and film footage. However, in doing so they miss the last train to their first destination. The group has no choice but to spend their first night in Europe in sleeping bags on the floor of London Airport. First lesson learned, plans do not always go as expected, but this was just the beginning. These four young men were about to learn several lessons as several of their plans would take a sudden and unexpected turn.

During the five week trip the group stopped at eight specific locations and took on eight different topics. During each stop they interviewed several people about the specific topic they were focusing on. In addition, when they arrived in Hungary they covered the topic of wealth and poverty and the group agreed they would all fast for the day and use all the money they would normally spend for food and beverages to help someone in need. Coincidentally that was also the day they met a group of Christian dancers who invited them out to dinner . . .

The group met several people and learned a lesson at every stop. Some were obvious and others subtle but all were priceless. The following documents every scheduled stop and topic of discussion. 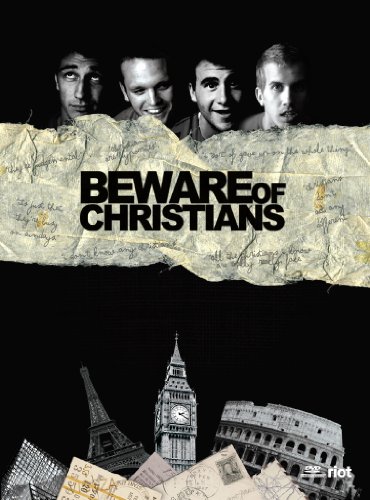 Beware of Christians Amazon Price: $5.99 Buy Now(price as of Nov 12, 2015)
The young men found that many of the people they interviewed missed the point about Christianity. Most of them considered it just another "religion." However, the young men emphasized that Jesus didn't come to earth to establish a new religion but a Kingdom. They went on to underscore that as Christians, we should not try to create a better version of this world but show people that there is a better way to live. So, what does it mean to be a Christian? The four young men made it a point to stress that it's not just saying one little prayer. They point to the fact that when you are saved you are reborn according to the Bible. They also made it a point to highlight that it will be the hardest decision you will ever make in your entire life but it's also the best decision that you will ever make.

The End of the Journey - The Beginning of a New Life

At the conclusion of their journey the young men had answers to their questions.  It was quite apparent that something in their lives had changed and they spoke with a new found wisdom about life as a Christ follower.

"If you're truly a Christian," the young men state; "it's gonna be hard and it's worth it. Because it really doesn't cost you anything to know how you're supposed to live or to talk about it. But it cost you a lot to actually do it!" They go on to say that "we are called to be different. By trying to fit in, are we saying that Jesus is not enough. If we're going to claim to love Jesus our lives better show it."

If you claim to be a Christian, you might want to ask yourself; "How do I act any differently than those who do not call themselves Christians?" If you have a difficult time answering the question, I recommend you watch Beware of Christians. It just may change your life.

The four young men are not acting but simply being themselves in this documentary. They come across as genuine and believable. The young men are passionate about their convictions and they honestly set-out on their journey to find answers to specific questions that were pressing on their hearts. Questions such as; "How can we take off a label and take on a lifestyle?" filled their minds.

However, not only did they find answers, but you can too. This film is candid, absorbing, and inspirational. Everyone should see it and I recommend parents watch it with their teenagers or young adult children. Beware of Christians is a thought-provoking film for both Christians and non-Christians.

Suffering for Your Faith - Christian Persecution