Art of the Pre-Raphaelites [Paperback] Pre-Raphaelite Drawing [Hardcover]
InfoBarrel is a writing platform for non-fiction, reference-based, informative content. Opinions expressed by InfoBarrel writers are their own.
InfoBarrel > History

'Art enables us to find ourselves and lose ourselves at the same time.' Thomas Merton

Credit: WikipediaJohn Atkinson Grimshaw (1836-1893) was born in Leeds, England. Grimshaw began painting when he worked as a clerk for the Great Northern Railway, a job which he soon left to pursue art.

Grimshaw began exhibiting his work in 1862. His art was influenced  by John Ruskin’s creed of ‘truth to nature’ and expressed a Pre-Raphaelite style, often with moody nocturnal landscapes, or dockland scenes, which were often misty, moonlit and atmospheric.He had married his cousin Frances Theodosia Hubbarde in 1856 and they went on to have several children, who also became painters.

Grimshaw excelled in capturing the turn of twilight into night. He often painted the docklands of Glasgow, distilling the essence in his paintings, of this industrial, waterside town of Victorian times. The fog and glittering lights, reflecting off the wet road and the feeling of a busy place, winding down toward the night, is conveyed beautifully.

Credit: Wikipedia
The Lady of Shalott
Grimshaw was a "remarkable and imaginative painter", who favoured ethereal or moonlit scenes with great attention to detail.

He was born into an artistic family, who lived in Bloomsbury in London.  His father, brother, and sister Margaret, were all well-known painters. He was initially trained by his father, before entering the Royal Academy schools in 1870. Dicksee was an outstanding student, earning many distinctions and medals.

Miranda (1878) In Shakespeare's play The Tempest,  is the beautiful daughter of the old Duke Prospero. 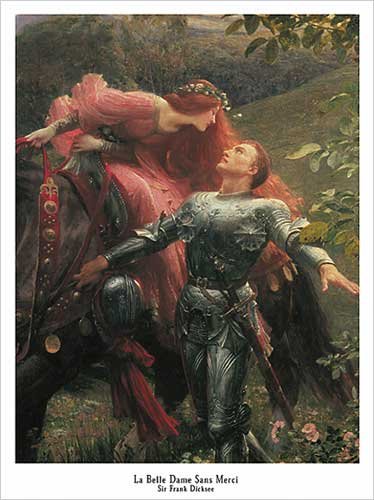