Alexander Graham Bell was born on March 3rd, 1847, in Edinburgh, Scotland. He was the second of three children. His family had a tradition and reputation as experts in speech correction and training of hearing impaired. His grandfather, Alexander Bell, was a shoemaker in St. Andrews, Scotland, and while repairing shoes, he used to recite Shakespeare. He did this so often that he gradually began to devote himself to improving the diction with the exact pronounciation for each word. He abandoned the trade of shoemaker and went on to work in the world of theater. However, after some years on the stage he realised that his real passion was not in theatre: he became professor of elocution. He gave lectures on Shakespeare, developing good practice in the treatment of speech defects, specializing in phoniatrics: the study and treatment of disorders of voice and speech. His father, Alexander Melville Bell, became interested not only on the sound of the words, but also the causes of their sound. He studied the anatomy of the larynx, vocal chords, mouth, etc., creating what he called "visible speech". He is the author of the book "The Standard Elocutionist ". Bell, his father and his grandfather had the same first name: Alexander. Until the age of 11, he was simply called Alexander Bell, until one day in school the teacher suggested to adopt another name to differentiate him from the grandfather. After consulting with the family, he chose Graham, in honor of a great friend of his father. At age of 14, he built with his brothers a curious reproduction of the vocal tract, which is the one responsible for the presence of sound in speech. They mounted on a skull a tube with the equivalent of vocal chords, palate, tongue, teeth and lips, and with a bellow: an instrument to produce currents of air, which works by expansion and contraction, absorbing air through a valve and expelling it through a pipe. By blowing into the trachea, the apparatus caused the skull to pronounce "ma-ma", imitating a crying child. Alexander Graham Bell grew in this way in an environment of study of voice and sounds, which certainly influenced his interest in the field. In addition, his mother has become deaf at a very young age. He studied at Edinburgh University, where he began experimenting on pronunciation: how to articulate sounds, words or phrases. One day, a friend of his father spoke about the work of a certain German scientist named Hermann von Helmholtz, who had investigated the physical nature of sound and voice. Excited about the news, he rushed to get a copy of the book. There was only one problem: the book was written in German, a language he did not understand. Furthermore, it had many equations and concepts of physics, including those related to electricity, an area that he didn’t dominate either. Despite all the difficulties, Bell understood (through some drawings of the book) that Helmholtz had managed to produce articulate sounds, which are those formed by a combination of sounds, such as voice. Synthesizing them at that time meant to be able to turn them into electrical sounds. They thought to do this by imitating the human voice with sounds that are quite similar, but created by a machine. Contrary to what you may be thinking, this was exactly the mistake that caused Bell to start thinking about ways to send voice remotely by electrical means. In 1868, he became an assistant to his father in London, assuming his position full time when he had to travel to the United States to give courses. At that time, his two brothers, the eldest and youngest, died of Tuberculosis, which is a disease caused by Mycobacterium tuberculosis or M. tuberculosis that affects the lungs. Economic difficulties increased and the threat of suffering from the disease, also found in Graham Bell, pushed the father to abandon his career in London, at the peak of his carrer, and in August 1870, moving with his family to Canada. They bought a house in Tutelo Heights near Brantford, Ontario, that was known as "Melville House" and is today preserved as a historical relic. Bell's father was famous and was well received in Canada. In 1871, he was invited to train teachers at a school for the deaf in Boston, in the United States, however, preferring to remain in Canada, he sent his son instead. Graham Bell went on to teach the pronunciation method developed by his father, training teachers in many cities besides Boston because, at that time, before the discovery of antibiotics, the hearing impairment was much more common and could arise as a result of many diseases. In 1872, he opened his own school for the deaf. The following year, in 1873 he became a professor at Boston University, at which time he began to be interested in telegraphy and started to study ways to transmit sounds using electricity. Through his work as a teacher of the deaf, A. Graham Bell - as he used to sign and liked to be called - met influential people who then helped him a lot. One of them was Thomas Sanders, a wealthy leather merchant who lived in Salem, near Boston, whose son - George - was a student of Bell. The boy improved so much that Sanders gratefully invited Bell to live in his house. Another important person in his life was Gardiner Greene Hubbard, a lawyer and successful businessman, who was to become his father-in-law in 1875. In 1898, Bell replaced his father in the role of president of the National Geographic Society, has transformed the old bulletin into the beautiful National Geographic Magazine, which is very similar to the one we have today. Alexander Graham Bell died at his home in Baddeck, Canada, on August 2, 1922, aged 75. Many know Bell as the inventor of the telephone, although today it is recognized that the true inventor was the Italian Antonio Meucci, but few know of his other achievements. 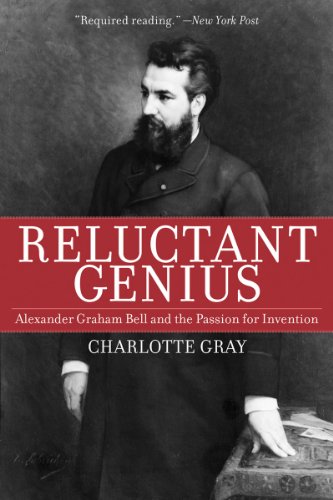 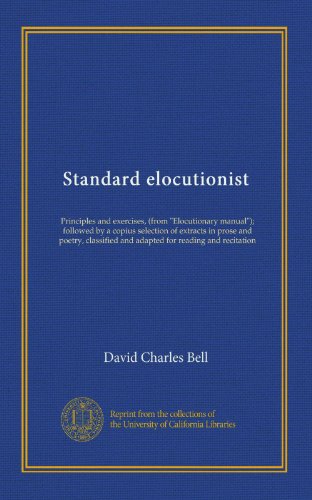 Standard elocutionist: Principles and exercises, (from "Elocutionary manual"); followed by a copius selection of extracts in prose and poetry, classified and adapted for reading and recitationAmazon Price: $34.99 $33.24 Buy Now(price as of Jul 16, 2013)
Next >> Fashioning a Reign: 90 Years of Style from the Queen's Wardrobe - Magnificent Exhibition at Buckingham Palace