The incident of 9/11 brought a sense of vulnerability to the American people that hadn't been felt since the end of the cold war.  With that came the fear of the unknown; the possible use of biological weapons fuels that fear.  It is difficult for adults to explain something to children of which they have little knowledge or experience.  Public health preparedness can educate and perhaps ease some of the anxiety that biological agents provoke.

The Most Likely Biological Agents

Bioterrorism is defined as the deliberate use of bacteria and viruses as weapons. They are used to create mass panic and hysteria that would create disruption in a society. The five most likely biological agents that would be used in a bioterrorist attack

Credit: photo courtesy of the CDC Source: Wikimedia Commons are:

Unless announced by the terrorists, these agents may not be identified as a terrorist attack unless there is an epidemic or cluster of people presenting with clinical findings of the disease because they have incubation periods that are commonly days after exposure. Furthermore, the early symptoms of these agents are often nonspecific.  They often present as flu-like symptoms, but several of the agents are lethal (plague) and others are lethal if not treated quickly (some forms of anthrax and botulism).

The Effects of Biological Weapons on Children

While the effects of biological weapons on adults have been researched; the effects on children are less known.  Physically, children may be more vulnerable simply due to their development levels.  Their respiratory rates are higher; they are lower to the ground; their skin is more

Credit: Photo courtesy of the CDC, Source: Wikimedia Commonspermeable and they are more likely to have cuts or abrasions that would allow organisms to enter their bodies.

Emotionally children may suffer similar trauma as adults, but perhaps at a higher intensity.  For example, in a national survey conducted three to five days after the 9/11 terrorist attack; 35 percent of children experienced symptoms of stress that included trouble sleeping and the inability to concentrate.  Forty-seven percent expressed worry about their own safety or the safety of their loved ones.  Studies of other disasters such as the Oklahoma City bombing, found that trauma-related symptoms of stress were still being experienced in some children two years after the incident. [1]

Vaccines for the five most likely biological agents are not commercially available.  However, caretakers can help reduce children’s fears by becoming more knowledgeable about biological agents and the emergency preparedness plan in their area.    Suggestions for helping children reduce their anxiety and fears include:

Professional counseling may be indicated if the child’s normal activities or functions are impaired and caregiver’s are not able to resolve the child’s fears.  Further information that may be helpful can be found on the web site for The Centers for Disease Control and Prevention.

The copyright of the article Biological Warfare and Children is owned by Cheryl Weldon and permission to republish in print or online must be granted by the author in writing. 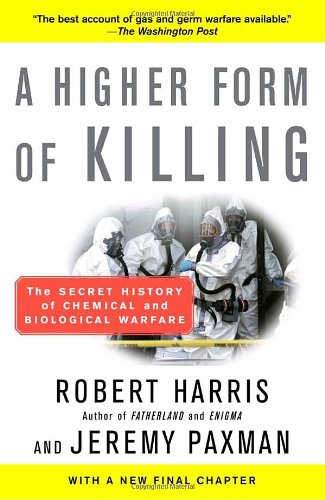 A Higher Form of Killing: The Secret History of Chemical and Biological WarfareAmazon Price: $16.00 $4.00 Buy Now(price as of Oct 24, 2013)
Explore the unsavory and enlightening tale of the history of biological and chemical warfare.
Next >> How to Get Creative Juices Flowing - Get Your Body, Mind and Soul on the Same Page