A biochemical tattoo is a relatively newer version of the body painting genre. Body art like body piercing and body painting have been a very ancient culture among many tribes all over the world. However, in the earlier days, the designs used to be simple. As there were not many equipments available previously with which artists could draw whatever they wanted to on the body, they had to limit their options to a few basic signs and patterns. However, it was after 1979 that a whole new avenue for body tattooing came to the front. So, what particularly happened in this year? The movie Alien released, and the projection of the aliens through various innovative tattoos made a new invention in the path of tattoos. The style of “biomechanical” became popular, and since then, thousands of people have gone for this type of tattooing on their body parts, and sometimes in such great quantities that these biomechanical tattoos cover their whole bodies.

Shifting from 1979 to the present day, biomechanical tattoos have seen a good deal of latest technology being incorporated to get the best out of it. The inspiration mainly came from the Star Trek’s Borgs which are portrayed as a mixture of humans and machines. Biomechanicals are mainly such a fine combination of the organic and the mechanic. The details like screws and wires are used with a fine blend of the muscles and nerves, and all this happens on the human body and give rise to a masterpiece of biomechanical tattoo.

The designs for these one of a kind tattoos come in a variety of forms, ranging from machines like guns and motor bikes to the innovative details of the human body. You can also let your imagination run wild and get a completely unique mixture of the organic and the mechanical. After all, this is the whole concept behind the biomechanical where the ‘bio’ or the organic meets the ‘mechanical’ or the machinery. The trick behind getting a great biomechanical tattoo drawn is to be able to combine the real with the imaginary. Whether you are just drawing parts of the human interior or the machines or even a combination of both, you are basically creating an illusion that has to look as real as possible.

The reason why there have been a selected few great biomechanical tattoo artists like Guy Aitchinson and Aaron Cain is that they have been able to achieve the perfect blend of the fictive and the non fictive. What they specialized in their tattoos was a column of the torn skin to show what lies inside. They used their imagination to draw intricate details of machinery so that it looks like that your body is made of machines and not flesh and blood.

Men are known to prefer biomechanical tattoos more than women, mainly because they tough nature of these tattoos suit the constant desire to explore and fight that is found generally in men than in women. The meaning of the biochemical tattoos does not just end with the surface. It goes deeper, just like the tattoo image itself. These tattoos have different meaning. For example, a biomechanical tattoo that has a combination of the flesh and mechanics can mean the combination of the toughness of machines along with the compassion and humanity of flesh and blood. Similarly, a man who proudly flaunts his tattoo that has a complete gun shaped on his hand is proud to tell the world that he is a tough nut to crack and that folks should think twice before messing around with him. 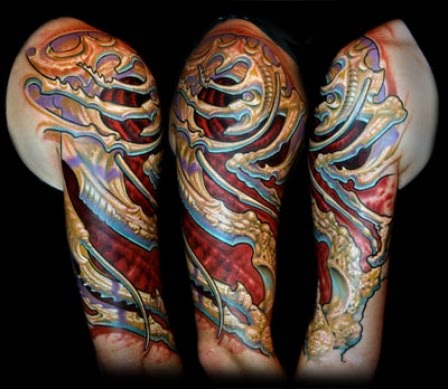 The colors of these tattoos have been varying with the passage of time. Previously, when the fashion of such tattoos had just begun, the colors mainly concentrated on black and white and grey of various shades. However, tattoo artists began to experiment with other colors as well to give a more lifelike feel to the tattoos. A heart or nerves would not really look as appealing in grey as they would do in their real colors. Similarly, designs like reptiles or faces need to be given their original colors to bring the feel and look that you expect after the hours f sessions under the needle.

The locations on the body those are mainly famous for getting the large and intricate biomechanical tattoos are generally the parts which have a good surface area. This has a reason, for the tattoos are usually elaborate and require a bigger section of body area to develop properly. For this reason, the torso, the abdomen, the biceps, the thighs and calf muscles, the shoulders and also the whole back portion have become much favorite for carving the tattoos. However, body parts like the neck, the wrist are also used often to get smaller but innovative tattoos.

The time required to get these tattoos usually varies from design to design and also from artist to artist. A usual tattoo of a gun or such design over the whole hand can take up to 22hours. Similarly, if you want to get your complete back tattooed, that could take a similar time period which can be divided in to 7 to 9 sittings.