When I am not a Signaller for Network Rail (previously known as British Rail) I write articles for InfoBarrel, Squidoo and my own websites. You can follow all of my exploits on GoldenBlock.co.ukÂ or my Google Plus (G+) account Darren Whittenham-Gray+
InfoBarrel is a writing platform for non-fiction, reference-based, informative content. Opinions expressed by InfoBarrel writers are their own.
InfoBarrel > Technology > Mobile > Cell Phones

I have been a BlackBerry user for four years and before I got this new handset I was using a BlackBerry Torch 9800 and the progress has been huge. Before we start talking about what I found, lets take a look at the BlackBerry Z10 specs:

At the time, the BlackBerry Z10 was at the lower end of high-range in terms of specification. The problem is that it is not how fast your phone can be, but how the software uses it that counts.

The BlackBerry 10 OS was developed by the same team that built the QNX software found in many luxury cars and commercial systems. The company which developed it was bought by Research in Motion in 2010 before they renamed the company after the handset range.

This software brought a whole new way to manage your handset. With the exception of turning it on, there is no actual need for any other buttons. This means that because you can wake your phone up with the swipe of a finger, there is more room for the screen and that fast dual-core processor. You will notice some common features though; a grid based app menu for example.

At first the BlackBerry Z10 might seem a little cumbersome to hold with a reasonable screen but an enlarged bezel top and bottom; and this is is partly because the new, completely gesture controlled software; needs those borders to work.

What is obvious though is that when it was brand new, this BlackBerry phone was slightly confused. This was developed as a business handset but with a very much a consumer orientated launch with Alicia Keys and the vast array of social and gaming apps on it's App Store.

Over the last two years though BlackBerry 10 has developed into a bit of both worlds. Locked down features for bigger businesses and the Android Run Time (ART) so you can play Candy Crush Saga

Messages Replaced By The Hub

One of the big changes to the BlackBerry 10 range is that your mailboxes and the "Messages" folder changes.  If you have already used an older BlackBerry then you will already have used the Messages system.

The replacement Hub can be found by swiping in from the left edge of the screen (or in the apps menu) and offers the usual range of mail and social media message options.

You can change almost any setting for all, or individual message accounts.

Credit: darren-w-grayIf you want your business e-mail address to have a different alert to your Facebook notifications then you can. Even if you want to make your texts from the wife prompt a ringtone of the funeral march, you can program the phone to a granular personalisation.

Your Bonus for BlackBerry Hub

There are some great little features as part of the BlackBerry Hub with I know I sometimes forget about.

There is also something extra for those BlackBerry 10 handsets that are tied into their companies infrastructure using BlackBerry Enterprise Server.

If you are using an older BlackBerry then you will notice the loss of BIS (BlackBerry Internet Service) which would allow you to go on your phone networks BIS service through a computer and add new e-mail addresses or update signatures them. Now you have to do this from the handset which with a touchscreen and a long signature can be fiddly... or use copy and paste! This also affects the way your data is delivered. On older BlackBerry phones webpages and e-mails were compressed before they were transmitted to your phone. This means if you first move up from an older BlackBerry you will use more data. Like for like, I found my data use increase 300%.

The new Z10 has brought with it a huge update for apps and programs.

As with previous incarnations apps are installed through BlackBerry World, and you can do this online as well, but as usual you will find some regular contenders pre-installed: 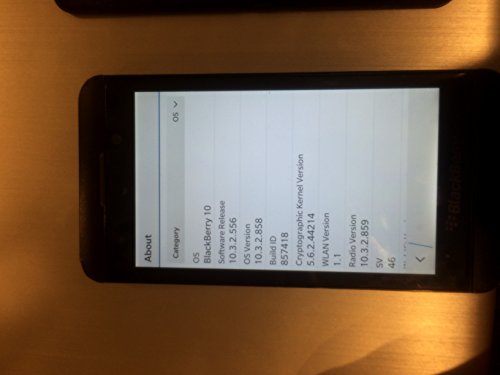 Something which I am impressed with is the camera. You get now is a really good camera and a video recording capability of 1080p high-definition, and BlackBerry Link can be set up to copy your pictures across to your desktop either when you connect it via the USB or are in the same Wi-Fi network.

Over the various updates there have been new features added such as  HDR[2] (High-dynamic-range) and this basically means that using that setting; your BlackBerry 10 handset takes a picture at three different exposure settings and merges the picture to give you a balanced image. The only problem is making sure the picture you are taking stays still for a few seconds!

There are an increasing range of third-party apps that are adding value to the BlackBerry 10 range.

Admittedly it was a very slow start but updates to the Android Runtime[5] mean that a range of Android Ports are now available through the Amazon App Store which BlackBerry have included as part of the update to version 10.3.1 of BlackBerry 10.

There are now a huge range of third party apps though. Everything from apps to flash your notifications LED a different colour to fully fledged satellite navigation systems can be found on the BlackBerry AppWorld and as with other operating systems you can prompt your phone to install apps from it from your PC web-browser. App prices vary but are usually less than $5.

I like my BlackBerry Z10 but I understand why people don't.

The device is still having trouble standing up and oozing refinement, but as a package the Z10 will entertain both upgraders and new BlackBerry converts alike. The updates to the software continue, so it might be that those little reasons you have not got a BlackBerry 10 handset are short-lived and make the BlackBerry Z10 great.

I wouldn't buy a Z10 band new now though. If you are looking for a all-touch BlackBerry 10 handset then you should consider the more recent BlackBerry Z30 instead, it has significant hardware updates but if you have read all the way down to here then then the principles are still the same.