The book Unbroken is an amazing story of survival, resilience, positivity, and what a human being can accomplish. I highly recommend the book if you are looking for a good read, a motivation to overcome something in your own life or give you inspiration to try a new endeavour.

The first part of the book describes the childhood of Louis Zamperini in Torrance, California. Louis was a troubled kid that carried a lot of resentment and anger. He would regularly lash out and steal things, get in fights with other kids, get chased by the cops and disappear regularly. In this portion of the book, you get the picture that Loui's life could have easily turned out mediocre and potentially violent if he had continue to go down that path. Fortunately for him, he was fast... way faster then the other kids! Louis took up running after his older brother, who already had achievements in running before him and was also able to coach him.

Louis kept running and want to make it to the Olympics, where he actually ended up qualifying for a race that wasn't his specialty and what he had been practicing for. The Olympic games were in Germany and even though Louis did not win his race, he was inspired by his brother's words "If you can take it, you can make it!" and came through with a strong "Kick" at the end of the race. Louis performance was strong enough to get him a 'shake hands' with Adolf Hitler!

This part of the book is very inspiring as it describes his journey from trouble maker to Olympic athlete! The rites of passage of a boy to become a man and to prove himself under duress and challenges. Louis acquires focus, tenacity, passion and finds his purpose in life, which keeps him away from trouble. 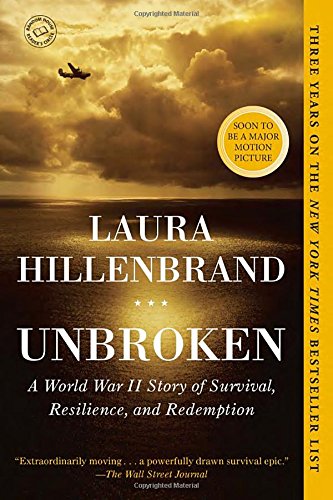 Louis talking about his Olympic Journey!

Following the games, Louis went on training and after his promising performance in the 1936 Olympics he kept training and had hopes for Gold in the next games. However, his plans would be crushed by the WW2 and the attached on Pearl Harbor.

Louis goes on to be deployed in the Pacific Air Force and after tedious training, he starts finally being used in missions against the Japanese Army. A particularly interesting passage in the book describes an air mission against the Japanese army where Louis' plane is attacked multiple times and barely makes it back to the base.

The experience in this part of the book is described in detail and the looming expectation of disaster is depicted vividly. Louis' thoughts, expectations, and concerns fills the reader with emotions of anxiety that he probably felt during the war itself as well as a genuine concern for the protagonist. The reader just began to care about this 'troubled boy' that just became a young and promising athlete in the previous part of the book and now the terror of war is upon him.

Louis after his most dangerous mission on the plane "Green Hornet"

In a routine mission looking for survivors in the ocean, Louis' plane had mechanical issues and took a dive and crashed in the middle of the pacific! All of the passengers died on impact, except for Louis and 2 others. The survivors stayed alive in a small raft and ate birds and fish they were able to catch. At one point in the book, Louis figures out a way to catch a SHARK that was circling the raft. One of the other survivors manages to distract the small shark with bait and Louis grabs it by the tail! Amazing passage in the book !

One of the most amazing moments is when a Japanese airplane is flying above them and taking shots at the raft! At this point, the survivors are exhausted, dehydrated, and malnourished. Louis still manages to dive under the raft to escape the bullets and fight off sharks with a paddle from the raft at the SAME TIME!

This is an incredible part of the book, a true inspirational story of survival, positivity, and resilience.

Only 2 survive the 47 days at sea. They end up being captured by a Japanese ship and taken as prisioners of war. I can't image the feeling Louis must have felt, after 47 days in the ocean he was captured by the Japanese and taken to a POW camp where he was immediately locked up in confinement, isolation, and tortured. I mean, come on the give the guy a break!

Louis spends years in multiple POW camps on the hands of the Japanese. The most disturbing character in the book is in this part of the journey. "The Bird" is a malicious, psychotic, and disturbed man that regularly beats the prisioners and tortures them. Louis is his favorite target due to his status a popularity as an Olympic athlete.

There are several sessions and stories in this part that are difficult to image and relate. The Japanese were known for the worst POW camps during the war. A particular section of the book covers a torture session where the guards make every single prisioner in the camp punch Louis in the face as hard as they could.

Through the weight loss due to malnutrition, torture and isolation, Louis maintains his positivity!!

When the war is finally over, Louis was rescued and returned home to California. He went through several years of adaptation back to post-war life. He was married and had kids, but the war still tormented him until he was finally brought by his wife to a meeting held by evangelist Billy Graham in Los Angeles. Louis found peace in forgiveness.

Louis reads his letter of forgiveness to 'The Bird'

Louis story is making it's way to Hollywood! Angelina Jolie is the director of the movie about Louis' life and the story of an Unbroken man!

Angelina on the set of Unbroken

Hello, please leave me your comment below about the casting of the Japanese singer Miyavi as 'The Bird"?

what do you think about the casting of Japanese singer Miyavi as the Bird?

Credit: what do you think about the casting of Japanese singer Miyavi as the Bird?