Hi I'm Josh. Thanks for reading my article. If you have any questions or want to ask a question please use the comments below. If you would like to join me in writing article for InfoBarrel than I would be more that happy to help, just drop me a line and I will share what I have learnt. Special Offer: Don't Lose Your Files Get a Dropbox account and get an bonus 0.5 GB. Thats a total of 2.5 GB FREE
InfoBarrel is a writing platform for non-fiction, reference-based, informative content. Opinions expressed by InfoBarrel writers are their own.
InfoBarrel > Business & Money

Richard Branson has become a celebrity entrepreneur that has seen a huge amount of success though the many companies that he has created as part of the Virgin Group. This has led him to start sharing his thoughts and knowledge on the subject of business and how he has chosen to operate in these complex economic times.

With Richard being in a new era in his life where he is able to leave the day to day running of his businesses to his management team, he has decided to turn his attentions to leaving a legacy of changing the world for the better in a number of areas. To fund his new endeavours he created Virgin Unite as the foundation arm of Virgin Group. As part of the new focus he has written “Screw Business As Usual”, where he shares his journey and those of his friends as they create new ways of doing business that benefit the economy, environment and the disadvantaged.

In his book he talks about the new initiative that he and his council have called “Capitalism 24902”. He explains the origins of the name and the meaning that he has attached to it. He is now dedicating his life to seeing the vision that is Capitalism 24902 to come to fruition.

Richard shares stories of other successful entrepreneurs that have created a new model of doing business that are not only creating economic benefit for the communities that they operate in but also benefits for the environment and the disadvantaged.

He and the teams that he is gathering around him are coming up with ways in which they can help to stimulate the economies of some of the poorest countries. An example of the work that Richard and his team is doing is Branson Centre For Entrepreneurship. Here the local team supported by dedicated and successful business people from all over the world are helping to educate and train people from all over South Africa to start and develop their own businesses. This in turn creates jobs for the people of their communities.

One excellent example is of a business call Gaming Zone which has seen the founders Musa Maphongwane and Amos Mtsolongo create arcades for the communities of Johannesburgs Soweto township. These arcades are housed in old shipping containers and have more than 100 children playing in them each day giving them a safe place to spend their days. So far they have seven containers and employ 15 people to help run the arcades. This business was made possible by the incubation and seed funding provided to those that go through the 18 month of training and mentoring offered by the Branson Centre For Entrepreneurs.

Richard has along with Peter Gabriel created a board of experienced and influential leaders that have been affectionately called The Elders. This board which is made up of people that have held influential positions have been given the monumental task of coming up with solutions to achieving lasting peace and enforcing human rights. With a name such as the late Nelson Mandela having been a founder and member of The Elders they are having an impact around the world. Current members such as Kofi Annan as chair, Jimmy Carter and Desmond Tutu who is an honorary member are a big reason behind the influence that this group of exceptional men and women wield.

Richard really has helped to change the way that I look at business, having already desire to start business that benefit the economy, environment and community, this book has expanded the way I think about how to achieve a win-win-win situation in business.

I could not recommend this book more highly to anyone that is or wants to be in business, as it will show you how to become truly successful.

I give this book: 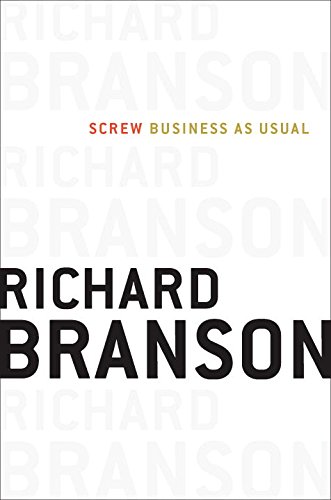 Other Book Reviews by Josh Young