Genevieve Cogman's debut novel The Invisible Library is the first instalment in the series by the same name. As the reader, you are thrown into action from the first page when the main character, Irene is in the middle of a mission. Irene's task is on behalf of the library where she is employed as a librarian. This came as no surprise, as that is generally what most people employed by a library are. Of course, this being an urban fantasy book, the library is not an ordinary library. We quickly understand that it is a mid-portal to other alternative worlds.

The objective of the library is to retrieve books from alternate worlds and keep them safe. This is where Irene comes in. As soon as she's retrieved the book from her current mission, she is told that she needs to retrieve a new book located in an alternate version of London. This new mission is more dangerous because the world it is in is unsuited for librarians. With a little help from her new friend and assistant Kai, as well as the Sherlock Holmes-like character Vale, they set out to retrieve this book on a mission that is soon to be discovered to be more dangerous than they thought it would be.

What I Liked the Most:

The first thing that strikes me is Cogman's world building. For a person who's been living in London for two years now it is absolutely fantastic to read how the author describes the city from an alternate world p.o.v. It is not quite clear what timeframe of the story is in relation to our present, but it seems to be a mixture of Victorian London and Grimm's fairy tales.

In this alternate version London, it becomes clear to the reader that faes are inhabitants of the world. Faes are creatures of magic and of chaos. I absolutely love how Cogman has adapted the fae to her story. Characters that would be described as stock characters in other stories are explained away as a trait of the fae, and I have to admit that this is a brilliant stroke of the quill.

What I Liked the Least:

The biggest issue I have with this story is Irene's dependence on others. This is such a big blunder that it drags the reader experience down two notches. In the beginning of the story Irene is able to defend herself well and escape from the clutches of danger without assistance from others. I found myself cheering for her and was marvelling at this strong female lead. But as soon as the story progressed Irene is more and more dependent on the characters around her (who are mostly men) to solve the problems.

Admittedly, the alternate world is male-dominated and this makes it slightly more challenging to write a strong female character. However, inventing a chauvinistic world on paper does not give an excuse to make the main character dependent on the men around her. It means that through the eyes of the main character, there is a responsibility to draw attention to the problems she is facing by being dependent on the characters around her. In my opinion this is not made clear enough by the author.

Without giving too much away there are of course reasons why she cannot defend herself with the same means as before. I would expect nothing less from a good author than to throw in some (seemingly) impossible tasks. However, these tasks should be solved with minimum help from others.

Sadly, it is noticeable that it is Cogman's debut as an author. While she writes in an engaging and addictive manner, her main character falls slightly short of a good heroine. What saves the story more than anything else is the whole concept of an institution whose main mission is based on the love of books and stories. All in all, it is absolutely a good read that drives the reader onwards in a lively manner and I would definitely recommend this despite its shortcomings. Final score: 3/5 stars. 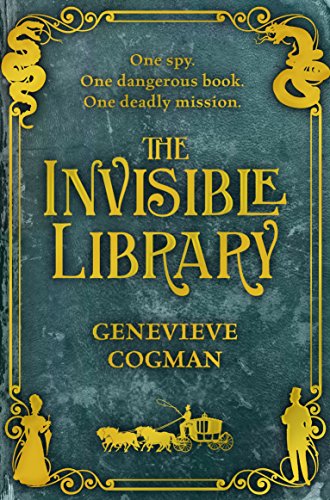