Everyone and their mother loves Amy Poehler and her self-proclaimed life partner, Tina Fey. Fey’s book, Bossypants, took the world by storm with its laugh out loud wit and humor in 2011. However, Poehler’s book is different. What Yes Please lacks in laughs and organization, it makes up for in realism and smart truths for women in the millennial generation.

From Poehler's appearances in the cult classic Wet Hot American Summer, to her rapping abilities on Saturday Night Live, and of course her waffle-loving tv persona, Leslie Knope from Parks and Rec, this blonde bombshell has stolen our hearts and replaced them with giggles (and sometimes milk coming out of our noses).

But it's been a long road to success for Poehler. It hasn't always been waffles, red carpets, and being a cool mom, as she explains in her book, Yes Please.  This Boston-native gives us a fresh, candid memoirish collection of advice and essays about what she knows and learned on childhood, womanhood, motherhood, and hollywood. (And a bit on marriage and divorce but that doesn't rhyme.)

Amy Poehler admits imperfection, and so does her book. Poehler’s life has been messy, a little scrambled, but full of learning and humor. Her book is no different. Amy’s done cocaine. Amy’s been a waitress. Amy’s yelled at a jerk in an airport on her way to filming Mean Girls. Poehler comes across as quite genuine and it's a breath of fresh air. In the preface of her book, she tells her audience, “Everyone lies about writing…The truth is, writing is this: hard and boring and occasionally great but usually not.”  This book has been criticized for Poehler's gripes and "complaints" about writing and life in general, but I interpret that as honesty, and I appreciate it.

I love Poehler, so it's difficult to point out flaws in this book, but there are a few. My only criticism is that this book is a little disorganized. The chapters skip around from childhood to living in Chicago to adolescence to living in New York. It's a little hectic. But it is written with chaos in mind. She’s a new mom, who writes about the ups and downs of having young children. She hasn't sugarcoated the challenges of motherhood, or anything else for that matter.

Other reviews claim that this book is mostly filler, but I disagree. [1] However, I admit that there are a lot of pages filled with pictures and sayings (like fill in your own thoughts). It sometimes feels as though Poehler didn't have a lot of time to dedicate to this book, which may be true. Different parts of the book are written by her mother, father, and SNL co-star, Seth Meyers. You can tell Poehler was feeling a bit pinched, but again, that just makes Poehler come accross as a raw, real-life person, not a pretend hollywood starlet.

I liked this book and  would recommend it. Yes Please made me think, which honestly I wasn’t expecting. But there is genuine wisdom and kindness and realness in this book which you don’t usually find within the pages of celebrity memoirs. However, this book not as funny as Tina Fey’s Bossypants, nor is it as confident. If you’re going into Poehler’s book expecting Fey’s, you’ll be setting yourself up for disappointment. I liked the less confident, more empowered voice of Poehler's, however, and I hope you will too. 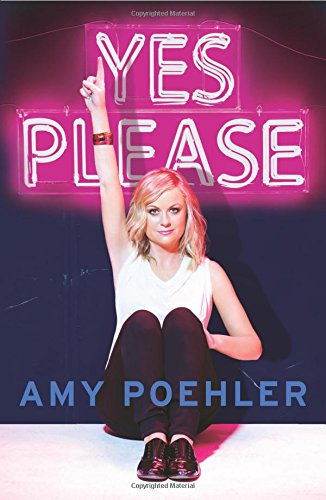