What are the greatest problems facing our world today? In face of biodiversity loss, global warming, resource depletion and extreme weather conditions, all of which are intimately tied to the lives of millions, language extinction may appear to be the least of our worries. In fact, is language death not a good thing? How can sinister the abandonment of primitive languages be? Do indigenous peoples not long for a modernised lifestyle, speaking one of the major world languages, which are the major vehicles of culture, science and technology?

These authors argue that language death is, contrary to popular belief, part and parcel of the environmental problems that are threatening us today. The relative indifference towards this issue can be attributed to the erroneous popular conception of the ecosystem, which takes indigenous peoples out of the equation - with grave repercussions.

Although published over a decade ago, this book remains largely relevant, save for a few statistics that now need updates. Indeed, little has changed from the publication of this book at the turn of the century to the present moment: Language extinction remains very much under the radar, with few signs of arousing concern.

The books is written from two vantage points - anthropology and linguistics, which have maintained a rocky love-hate relationship during the past century - by two seasoned researchers in these fields. The result is a volume which is at once comprehensive and abundant in details. It offers a macro view of the linguistic landscape from the Paleolithic to the 20th century, while also zeroing in on important case studies, from decades of Hawaiian exploitation to modernisation attempts that ride roughshod over the needs of indigenous people and their languages.

Australia was one of the final frontiers of linguistic diversity before Western settlement. However, its aboriginal peoples have also been subjected to the most brutal acts of extermination and forced assimilation, winnowing down their repertoire of tongues to just over 200, most of which are moribund.

After a brief introduction, the book showcases the extensive array of languages that our world retains. It offers several metrics by which to gauge linguistic diversity, describes the geographical distribution of tongues, and a gives brief overview of language death. Much of it will be old news to those who have studied language and linguistics in depth, like language families and typological classification, but it is essential that other readers be equipped with these concepts to fully appreciate the nature of the linguistic ecosystem.

This chapter ends by touching on the book's core idea: The correlation between the 'linguistic and biological worlds'. Here, the authors finally elaborate on environmental implications of language loss, and how they are mutually dependent. After this preliminary treatment, the authors put aside this issue pro tem. They describe the vast pool of indigenous knowledge embedded in little-known tribal languages, and show their significance both to academia and to other denizens of the global village.

Unlike some other books of this genre, the authors do not venture into excessive detail about the peculiarities of tribal languages, which are important topics in their own right, but not absolutely essential to the issue of language death. Nor does the book choose to couch their arguments in spurious claims of neo-Whorfian relativism which, even if true, are not particularly compelling arguments in favour of language preservation.

Instead, the authors proceed to describe the utilitarian consequences of language extinction on the world's ecosystems, and how the loss of indigenous knowledge is undermining it. Environmental destruction in Palau, one of the most memorable examples from the book, is a case in point: tribal wisdom is eschewed in favour of Western fishing methods of questionable efficacy, breaking down the marine ecosystems that constituted a central part of Palauan economy. (Fortunately, as a later chapter explained, the situation has been successfully reversed.)

The authors then take the reader on a trip to Papua New Guinea, the last truly diverse hotbed of tribal languages. The nation is in a state of what influential linguist Robert Dixon called a 'linguistic equilibrium', where no one language was expanding radically to the expense of lesser tongues. There is a particular emphasis on relationship between linguistic and biological diversity. The chapter ends with a much-needed (if slightly abrupt) turn of events to the ways language die, which serves as a springboard to the next two chapters: the two major waves of language extinction.

The progression of civilisation

The biological wave and the economic waves were more than waves. They were tsunamis: Their consequences were scarcely felt at the outset, but upon hitting land, they relentlessly swept through and devoured every human presence in their paths. Such was the nature of the advance of agriculture and the market economy, both of which left no trace of the original rudimentary lifestyles they had irreversibly destroyed.

Farming, argued the authors, did not start out as technological progression. Our Neolithic forefathers were forced into agriculture by deteriorating climatic and ecological conditions. However, as time went on, agrarian economies dramatically outnumbered and marginalised their nomadic neighbours, who had no choice but to join their crusade. Through this process, Niger-Congo, Indo-European, Sino-Tibetan, Austronesian and other major language families conquered the Old World. The Europeans repeated this process in the New World during colonial times, which the authors called the 'Neolithic aftershock'.

The spread of agriculture in Africa during the 'biological wave' explains why much of the continent speaks languages from the same family - the Bantu languages.

Later, economic takeoff saw the suffocation of peripheral languages (such as Celtic languages and tribal tongues) by the high-prestige metropolitan languages, whether on the international level (English, French and Spanish) or the regional level (Swahili, Tok Pisin and Portuguese). As the authors show, the change was not effected through pure coercion, nor was it the result of free choice: a mélange of the two did the trick.

These two chapters are probably the most fascinating and revealing about language endangerment. It debunks questionable notions like the inherent superiority of major languages - geographical flukes and historical vagaries were the main factors behind Eurasian dominance in the linguistic landscape. They are also exceptionally well-written. The authors have spun a convincing narrative that uncover the gross injustices suffered by peripheral and pre-agrarian languages. Relevant quotes from contemporary commentators render their account all the more persuasive: the Gaels were disparaged as a 'savage and untamed nation, given to rapine, hostile to the English people and language and exceedingly cruel', while a clergyman declared that 'God, in making the earth, never intended that it should be occupied by men so incapable of appreciating its resources as the Aborigines of Australia', ironically before the Morton Bay Friends of the Aborigines.

Unlike some alarmists today, the authors do not end their book with mere appeals for action, nor do they put forward lofty, quixotic suggestions that require nothing short of a miracle to realise. Instead, they first expound on (most utilitarian) reasons why linguistic diversity should be preserved. They also disprove the 'benign neglect' position, which posits that progressively-minded indigenes give up their original languages of their own volition. Their notion of 'language rights' may leave some uneasy, but this does not contaminate or invalidate the rest of their wonderful chapter.

The final chapter devotes many pages to the 'bottom-up' approach of language maintenance, and righfully so. The authors refute the mainstream attitude towards language preservation, which tend to focus their crosshairs on governmental policy while neglecting the importance of domestic intergenerational transmission. Although they recognise the achievements and importance of this 'top-down' approach, they demonstrate its insufficiency by drawing from failed examples, especially Irish.

The authors' bottom-up measures, which necessitate the empowerment of local indigenous communities, are reminiscent of similar recommendations formulated by environmentalists like Derrick Jensen - if more moderate and sober. The authors do not advocate stultifying progress for environmental and cultural preservation. They suggest that development should use native cultures as a starting point, instead of replacing indigenous customs wholesale with Western social structures and technologies, which were originally tailored to occidental needs. The feasibility of their suggestions is demonstrated by successful examples.

They end the book with an exposition of the virtues of multilingualism and multiculturalism, which have been the norm in most of the world before they were demonised as insidious and divisive in modern times. This is sure to ruffle some feathers, but even vehement opponents of this idea will at least find their argument articulate and thought-provoking.

A Book Worth Spreading

It has to be admitted that this book has its shortcomings. Its weakness is mainly structural. Ideas are briefly introduced, then left in the back burner until a much later point in the book, to be elucidated and developed again. Such was the case of the processes involved in language death, for instance. Furthermore, section titles did not always lend to clarity, especially in the later chapters. The authors were also reluctant to partition their chapters into smaller subsections, except in the fifth chapter.

These inadequacies may have kept the book from gaining the wider readership it deserves. This is a pity, because I found the book satisfying in every other regard. Each chapter is filled to the brim (just short of overflowing!) with lively examples and powerful arguments. The prose is lucid and a pleasure to read, turning to emotive language only at the right moments. The pictures and diagrams, though not the focus of the book, are always apposite.

Moreover, it tends to take up moderate positions. For one thing, it rejects the widespread assumption that primitive cultures are devoid of value, but also recognises their need to develop and keep up with the times. It believes that the tribes should have the right to make decisions about their ancestral land, not because they are somehow more harmonious with nature, but because as long-time inhabitants of the area, they have greater incentive to use it sustainably. It is also unusually agnostic about the ways language shape cognition, and give colonialists and metropolitan languages credit where it's due.

At the beginning of the book, the authors explicitly stated their intention: To raise awareness among scientists and the general public. Alas, they are still a long way from achieving this goal. The fight for linguistic diversity is a long one, with no victory in sight. 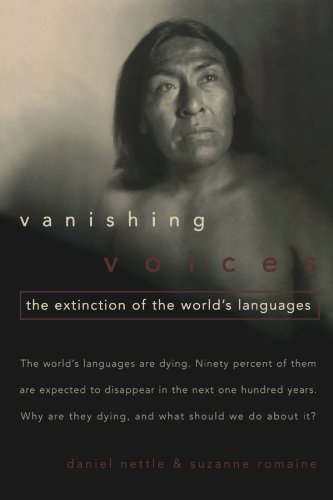