There are a number of rare sheep breeds, but luckily the advantage of maintaining these breeds is becoming more obvious and greater efforts are being made to ensure their survival. Some rare breeds have remained virtually unaltered for centuries and as such may be important genetic resources. They may possess traits which have been next to eliminated in the more modern-day sheep. Great Britain has a number of indigenous sheep breeds, some of which are now rare.

The Hebridean breed is endemic to the islands of the same name off the west coast of Scotland. They are classed as a northern short-tail breed. Natural selection has resulted in a tough, hardy sheep with a tendency to browse making them useful for ecological purposes in controlling scrub and weeds. Four horns are common and both sexes are horned.

The Boreray is endemic to the island of the same name which is one of the St Kilda group of islands off the west coast of Scotland. This small breed has black or tan hair on the legs and face. In general the wool is white to light tan but some animals are darker. Both ewes and rams are horned with the rams' horns being large and spiralled. Mature ewes weigh about 28kg and stand 55cm at the withers.

The term 'Welsh Mountain Sheep' embraces many breeds indigenous to Wales. The Balwen Welsh Mountain is one of these and is now rare. 'Balwen' is Welsh for 'white blaze'.

As well as the blaze, there should be four distinct white socks and the tail should be half to two-thirds white. The coat colour may be black, brown or dark grey. Rams are horned and ewes polled. It is a small but very hardy breed. 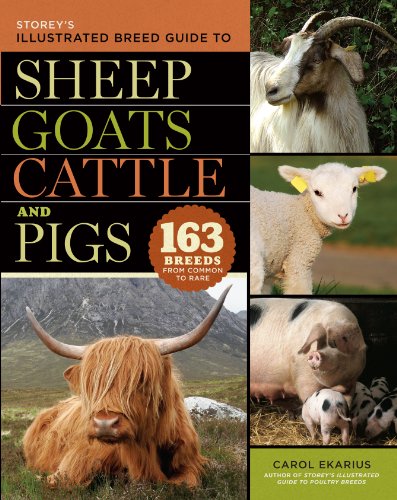 Storey's Illustrated Breed Guide to Sheep, Goats, Cattle and Pigs: 163 Breeds from Common to Rare Amazon Price: $24.95 $13.88 Buy Now(price as of Sep 2, 2015)
Both common and rare breeds of domestic livestock are discussed in this comprehensive bood.

The Cotswold grazed the Cotswold Hills when Caesar invaded Britain so it is a very ancient breed. The wool from this breed was highly prized and a major export during the Middle Ages. Wool churches and large, stately homes remain as testimony to the influence and wealth that came with owning the Cotswold.

The breed was exported to the United States in 1832 and is now listed with the American Livestock Breed Conservancy as 'rare'. It is a large breed with long, coarse wool which curls into natural waves. It is distinctive for the tuft of wool on the forehead. The breed is found in the United Kingdom, North America and Europe.

The primitive Castlemilk Moorit was developed by the late Sir Jock Buchanan-Jardine who wanted a distinctive sheep to display on his parkland. He also wanted a breed which would produce fine, moorit-coloured, kemp-free wool. Manx Loghtan, moorit-coloured Shetlands and wild Mouflon sheep were interbred to produce the Castlemilk Moorit. 'Moorit' means light brown. Mouflon markings include lighter colouring on the belly, inside the legs and under the tail. There is also a pale rump patch and around the eyes and lower jaw. The short tail is narrow and triangular. Both sexes have wide spreading horns. The breed is now found in the United Kingdom and in Europe.

The Devon and Cornwall Longwool is found in northern Devon in England. They are a polled breed with very strong wool which is used mainly for rugs and carpets.

Another polled English breed which is rare is the Dorset Down. It came about around 1800 when Southdown rams were put over large Wiltshire, Berkshire and Hampshire Down ewes. It is dark-faced with a short, close, high quality fleece. There is wool round the cheeks, on the forehead and on the legs. The lambs are early maturing. It is ideal as a terminal sire. Ewes breed through most of the year. Carcasses are well fleshed and the meat tender and tasty. The breed is found in Europe, Australia and New Zealand as well as in the United Kingdom. 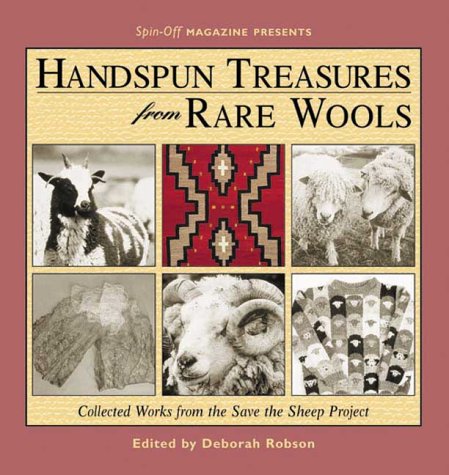 Handspun Treasures from Rare Wools Amazon Price: $62.66 Buy Now(price as of Sep 2, 2015)
Twenty-one endangered breeds are discussed, together with the characteristics of their fleeces.

The Herdwick is a very ancient breed of the Lake District in England. It is a great forager in the rough terrain of its native areas. The wool is coarse and grey and only suitable for carpets.

The Hill Radnor is found in the central marshes of Wales. It is a hill breed, thrifty and a good forager. For a hill sheep, the wool is remarkably white and dense with a fine staple. The fleece is popular with spinners and weavers. The rams are horned and ewes polled. The face and legs are light brown in colour and free of wool.

The Jacob is another ancient breed, only found on a few estates in Great Britain. There are flocks in America too and the breed is listed as 'rare' by the American Livestock Breed Conservancy. Four horns are common and the fleece is spotted black and white.

The Leicester Longwool has had a huge impact on the development of other longwool breeds. Robert Bakewell improved the breed during the 18th century although it had been around long before that. It is a big sheep with a heavy, curly, lustrous fleece, very consistent in length and fibre diameter. During the American Revolution, it was imported into the United States and is listed as 'rare' by the American Livestock Breed Conservancy.

The Lincoln is also a large breed with a heavy, long-stapled, lustrous fleece. Imported to the United States in 1825, they were used to develop the Columbia and Targhee.

The Norfolk Horn had its origins in Suffolk, Cambridge and Norfolk in England. The Suffolk resulted from crossing the Norfolk Horn with the Southdown. It is long in the body and legs. The face and legs are dark and free of wool. Both sexes have open, spiral-shaped horns. Lambs are born mottled and turn white later.

The Portland is one of England's rarest breeds. It is small with the tan face and legs free of wool. The lambs are born fox-red. Ewes and rams are both horned. The horns of the ram have a heavy spiral to them.

The North Ronaldsay or Orkney sheep is another of the northern short-tailed group. Their diet consists mostly of seaweed and they have adapted to a seashore lifestyle. They adapt well to conservation grazing and can be almost any colour. Rams are horned and have a mane and beard of coarse hair.

Small sheep breeders wishing to help in preserving one of these rare breeds have plenty to choose from. Many of the breeds have a Breed Society. The American Livestock Breed Conservancy and the Rare Breeds Survival Trust would be other starting places if researching these beautiful rare breeds.