If you love to write and would like to make some money doing so, sign up to infobarrel today, so you can start earning cash for doing what you love. Rock on! Sign up now at the link below:  http://www.infobarrel.com/signup.php?ref_id=2544112
InfoBarrel is a writing platform for non-fiction, reference-based, informative content. Opinions expressed by InfoBarrel writers are their own.
InfoBarrel > Entertainment > Film > Movies

The movie Brick was written and directed by Rian Johnson in 2005. It is unique because it combines a noir film style with the fast-paced, slang-infused dialogue of a 1940’s hardboiled detective story. This combination would be nothing new, except for the fact that Brick is set in a modern day California high school.

The story goes that Johnson worked behind the scenes in Los Angeles for a number of years until he had enough connections with technical film crew friends to make the movie on his own. He borrowed money from relatives and a few others and made the film with his own script for just under half a million dollars.

The majority of characters are high school students. The subject matter centers around an underground drug culture and the attendant calamities that a missing (then adulterated) brick of heroin causes among it’s dealers, users, and not-so-innocent victims.

Caught up in all of this is the sober yet antisocial Brenden Frye (played by Joseph Gordon-Levitt) who fills the role of detective as he tries to unravel the mystery of his missing former girlfriend, Emily Kostich (Emilie de Raven).

The movie Brick received a Special Jury Prize for Originality Of Vision at the Sundance Film Festival, where it debuted in 2005, before being released by Focus Features in April of 2006.

From Dames To Bruisers

All of the players in your typical film noir detective story translate easily into the high school crew. You have the damsel in distress, the femme fatale, the muscle, the brains, the bad guy and his henchman, and the reluctant, jaded, yet capable private investigator. There is even an official authority figure who concedes to help the renegade detective with caveats attached.  That role, in this case, is filled by the high school Assistant Vice Principal played by Richard Roundtree.

The movie generates a palpable contrast by using high school kids who act and talk like 1940s gangsters to spin a twisted film noir detective yarn. This unusual mixture is shored up by Johnson’s classic, head-high camera positioning. The traditional and steady camera perspective frames the shots as if the viewer were observing the film from within it. It is this point of view that helps the otherwise strange style of the film seem familiar. 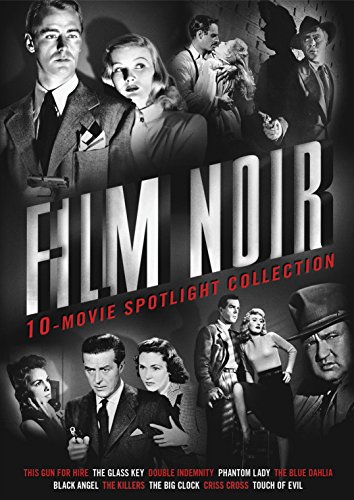 Much like the old Colombo television detective stories, the film opens with the results of a crime. We see a victim dead and abandoned and a lone high school aged  kid contemplating the scene. He awakes from this vision as if out of a dream and the movie is off. It never becomes clear whether or not the dream was instigated by a memory or a premonition, and ambiguity such as this creates tension throughout the entire film.

The story is coherent, but unclear at times. And the rapid-fire 1940’s style dialogue and esoteric slang make it feel, at first, like you are watching a foreign film. High school kids don’t talk like this. They don’t end conversations with open-ended blanks and let people figure things out. They don’t use phrases like “Quit your yappin’ and fix me one,” or “Whatever befalls you, I’ll deal with,” or “Why did you take a powder last night?”

But in some crazy way the set, setting, and dialogue just work. This is an otherworldly school. The kids are weird. The problems they have are indistinguishable from their recreation. They seem to wander outside of society and indeed the city they live in. Like a Peanuts cartoon, we rarely see a grown-up. Kids seem to run the world.

It's A Hip Scene, Dollface

Once you are within this closed system it all seems natural. The players in this surreal game have depth. There is lethal consequence. The movie inserts a theatrical style that feels genuine and never forced. Even when it shouts outrageous silliness it manages to stay believable (and therefore valid) if only in the confines of the insane microcosm that Johnson has created.

One example is the scene where head drug dealer, The Pin, arrives by minivan to pick up Brenden, our detective. Inside the van we find The Pin seated exactly as he has been shown to sit in his basement office. The Pin rides chauffeured in the very back seat with crossed legs, outfitted in a cloak and holding a walking stick. Next to him is a fully illuminated table lamp that rustles as the car pulls away.

The entire image is preposterous. It is as unlikely as it is unusual. Yet, in the context of the increasingly odd story, it works. It implies a subtle humor.

Another example is the big house party at a mansion of one of the rich kid's parents. We know that Brenden is going to this exclusive high school party. We have seen teenage parties at houses in hundreds of other high school movies. Yet, when we get to this party, it is the opposite of a crazy, out of control, drunk-fest.

In fact the kids walk around slowly. They sit quietly and listen to the football hero rant about the coach.  Then the hostess, femme fatale Laura Dannon, plays a languid piano piece decorated with a surreal poem she recites. (The beautiful poem, The Sun Whose Rays Were All Ablaze, was actually written and performed by actress Nora Zehetner for the scene.)

Quiet quirks like that continually create a style for the film that is unlike anything else in recent cinema. These odd touches help the film to actually be as cool as it thinks it is. This is blatant entertainment. It isn’t trying to be real. And yet somehow, it manages to be believable. These characters are meant to be viewed from the outside.

The kids in it are estranged teenagers that the adult world could never relate to. But the framework of this movie takes that perspective to a cosmic extreme. No one could relate to these kids. Not even other high school kids. It is pure fantasy. Even so, as we watch it we become absorbed in the tale. By the end you understand not only their slang, but their lonely lives as well. You hope for them. You wish you could warn them, or help them, or call the police on them. The entire experience is unique in the world of modern movies.

But Can Those Palookas Act?

The acting in the film stands up to its own expectations. This is not The Deer Hunter. But that’s fine; it isn’t trying to be. This is a clever story told in a unique way by guys who are doing it for the love of making a movie.

Joseph Gordon-Levitt is great as the brooding, exhausted outsider who becomes the storyline’s detective. Matt O’Leary is perfect as his deadpan, but intelligent helper, Brain. Nora Zehetner’s Laura Dannon is an absolutely perfect blend of alluring waif and deadly trouble.

Meagan Good pulls off the sultry drama vamp with ease. Dode, played by Noah Segan, is a tortured borderline villain. And Noah Fleiss gives what may very well be the finest performance in the film, as he guides his character, Tug, from mute muscle, through flirting sympathy, and back into cold-hearted killer.

Lukas Haas delivers a cold character with his portrayal of creepy drug dealer The Pin. You don’t exactly fear him. You definitely don’t like him. But, in some weird way, you trust him. Then we have Brenden’s ex-girlfriend, Emily Kostich, played by Emilie de Raven. We only see her in posthumous flashbacks, but her anguished turn as the it’s not you it’s me girl on her way out helps tie some much-needed emotion into this hardboiled look into the interconnected lives of these suburban ne’re-do-wells.

Join The Brain, The Pin, The Bad Girl, and The Detective in Brick 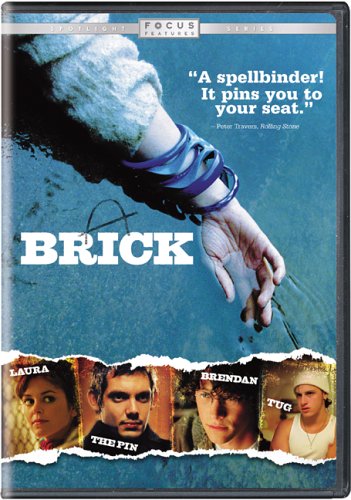 Wrap It Up, Jack

The 2005 independent film Brick, written and directed by Rian Johnson for just $475k, has become a cult classic among fans of both film noir detective stories and quirky surreal high school dramas. It is an emotional ride that contrasts its classic head high and steady camera shots with an implausible yet believable story of woe and dread.

The characters fit into film noir clichés but simultaneously turn those old roles upside down from within their modern day high school setting. The rapid-fire 1940’s style dialogue quickly becomes part of the movie’s charm and allows it to remain true to itself. That truth, however, always remains a great distance from any current high school reality.

The movie is worth watching for its sheer originality of form if nothing else. The speech patterns take some getting used to, but therein lies much of the film’s charm and personality. It is a flick that can be watched more than once, and it has developed a loyal cult following. That being said, I would be willing to say that the film’s best viewing would be your second or third round. This is mostly because it takes some getting used to and it lives in its own quirky space.

However, if you like emotional rides of pure entertainment supported by solid acting and artful yet classic direction, Brick might become one of those movies that you watch over and over again. Although I bet that most who watch Brick repeatedly, and help it earn its cult movie reputation, do so with long gaps in between. Check it out with an open mind and you will be glad you did. 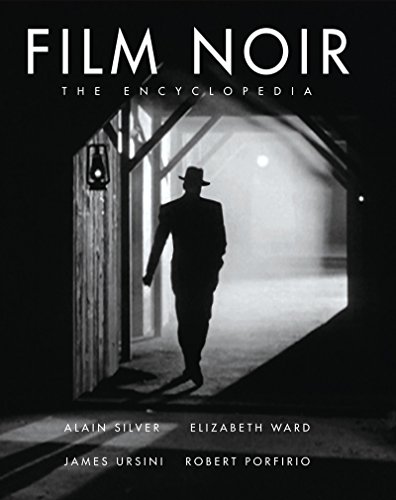 The Film Noir Encyclopedia Amazon Price: $45.00 $27.30 Buy Now(price as of Jul 4, 2016)
This hardcover book is a treasure of Film Noir history, insight, and knowledge.
Next >> Movie Review: The Girl on the Train