British Columbia’s Sunshine Coast is a 180 kilometer stretch of coastline on the western Canadian mainland just north of Vancouver and approximately a four hour drive from Seattle, Washington. This area offers visitors a delightful combination of a temperate climate, dramatic scenery and quaint village communities.

With the ocean at its doorstep and the rugged Coastal Mountains behind, and although only ten miles from Vancouver as the crow flies, this coastline is inaccessible by road.  It can, however, be easily reached by BC Ferries, water taxi or sea plane service from Vancouver International Airport.

Get DirectionsSunshine Coast, BC, Canada

The most popular way to reach the Sunshine Coast is to take the scenic 40-minute ride from Horseshoe Bay in West Vancouver on BC Ferries. This beautiful and relaxing trip passes between the mainland and the innumerable coastal islands which are dotted along the coast from Horseshoe Bay to Gibsons on the lower Sunshine Coast2. As you ride the ferry you leave the noise and stress of city life behind and enter a peaceful, unspoiled natural world.

The ferry from Horseshoe Bay arrives at the Langdale ferry terminal, a short 5 kilometer (3 mile) drive from the picturesque hillside town of Gibsons.

Gibsons has been a filming location for several movies1 including the Stephen King movie Needful Things (1993),  and Charlie St. Cloud (2010) starring Kim Basinger and Zak Efron.  This community of just over 4,000 is, however, best known in Canada as the location for the long-running CBC television series The Beachcombers, which aired from 1972 to 1990. Visitor attractions with Beachcomber connections include Molly’s Reach store, now a cafe, the tug Persephone which featured in the series, and a display at the Sunshine Coast Museum and Archives.

A History of the Sunshine Coast

Available as an e-Book 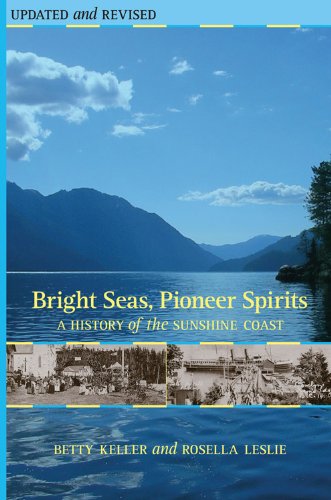 Gibsons is the Gateway to the other communities along the Sunshine Coast.

Sechelt3, which has a population of approximately 8,500, is a 27 kilometer (16.8 mile) drive from Gibsons. Here visitors can discover the traditional culture of the Sechelt Nation at the House of Héwhíwus (House of Chiefs)4.  Exhibits include traditional weaving and salmon-smoking, masks and stone carvings. Song and dance performances take place in the Raven’s Cry Theatre, and Talaysay Tours offers kayak tours to view First Nations pictographs; information on tours is available from the museum staff.

Powell River5 to the north, with a population of almost 13,000, was once home to the world’s largest pulp and paper mill and its town site has been designated as a National Historic District. It can be reached by ferry from Comox on Vancouver Island, or by driving up from Gibsons or Sechelt and then taking a short ferry ride from Earl’s Cove.

Tourist facilities along the Coast include restaurants and cafes for all tastes and budgets. There is also a variety of accommodation including camping and RV sites, cottage rentals, bed and breakfast facilities, hotels and motels.

Powell River hosts a variety of annual arts events including an International Choral festival and the Symphony Orchestra of the Pacific (SOAP).  Sechelt organizes the Sunshine Coast Festival of the Written Arts, while Pender Harbour presents a blues festival in June, a chamber music festival in August, and a jazz festival in September.The Gibsons Landing Fibre Arts Festival , which takes place in August, features juried crafts in conjunction with a market and street performers.

Gibsons is home to the Gibsons Landing Jazz Festival in June where many concerts are either free or with admission by donation. The June to September Music in the Landing is a summer-long series of free concerts, while the Sunshine Coast Festival of the Performing Arts takes place at the Heritage Playhouse from April to May.

The 180 km Sunshine Coast Trail7  from Sarah Point in Desolation Sound to Saltery Bay is Canada's longest "hut-too-hut" hiking trail. Day hikers can enjoy small sections of the trail while experienced hikers can plan a multi-day hike, overnighting in the huts along the way.

The Powell River Forest Canoe Route8 is a five-day, 57 km. circle of eight lakes and five portages which is best done between June and October.

Its sheltered inlets and calm protected ocean waters make the Sunshine Coast a popular ocean kayaking destination. Kayaking can be combined with bird watching and wildlife viewing at the numerous offshore islands, while Desolation Sound Marine Park can be reached by kayak from Lund.

Oceanographer Jacques Cousteau described the Sunshine Coast as one of the world’s best cold-water diving areas. The waters are clean and unpolluted, with year-round visibility, and an abundance of marine life.

An artificial reef created in 1992 by the sinking of the 111 meter (366 foot) HMCS Chaudiere9 makes Sechelt a choice location for divers.

Another prime diving location10 is Tzoonie Narrows, which is also a popular for night diving. Skookumchuk Rapids is also a popular dive with a wealth of marine life made possible because of the high oxygen content of its turbulent waters. However dives in this strong tidal area should only be attempted with a locally operated charter and an experienced local operator.

Mermaid Cove11 near Saltery Bay provides changing rooms and shower facilities for divers. It is a unique diving location for two reasons. The first is a large bronze mermaid sculpture which which has been set on the ocean floor. The second is its status as a wheelchair accessible diving location, with handicapped toilets and showers, and an access ramp to the water.

So close to Vancouver and yet a world away from the hustle and bustle of city life, the Sunshine Coast is a great destination for a one-day getaway or a week long vacation.