Build a Fun, Bunny-Safe Toy Abacus for your Pet Rabbit!

Credit: Vic Dillinger, 2015For those who do not own, or have never owned, a domestic breed of rabbit as a pet here are a few simple truisms relating to them.

Rabbits are extremely curious about their environments.  They like investigating their surroundings and manipulating things seemingly on a whim.  They may move their houses around to different spots within their pens; they may shove food and water bowls to a separate area as they see fit.

They are more intelligent than people may give them credit for; they can, and do, “build” things (if they have small boxes and other stackable items to work with).  They like dropping things into other things, most often small toys into their water bowls

Rabbits enjoy simple, repetitive tasks, as well: playing “bullfighter” with a bunny—using a paper towel as a “cape”—makes for some good play time.

And play is a large part of how pet rabbits may spend their time, whether it is chasing each other, bouncing around in their pens or around the house, or chucking balls and other toys.

Any playthings they are given, though, need to be safe.  Rabbits’ incisors continue to grow throughout their lifetimes at the rate of roughly 2 mm per month.  Because bunnies love to chew—and to keep their teeth from overgrowing, they must gnaw to keep them ground down—it is incumbent upon their owners to insure they receive non-toxic gewgaws for entertaining themselves.

Rabbits enjoy simple things: wood blocks, sticks, or balls made of wood or wicker windings.  A sheet of newspaper will hold their attention as they shred and toss it around.  Other safe items are cardboard tubes from rolls of toilet paper or paper towels—these are light enough for rabbits to hurl about and, since they will chew it, these won’t poison them or make them sick.  [You can also stuff the tube with timothy hay or orchard grasses—bunnies then get to eat and play at the same time.]

And a favored item is a simple corrugated paper carton (the ubiquitous “cardboard box”).  They hide in these, chew on them, jump on top of them, and it is one of the easiest, and safest, bunny toys to come by.  [Make sure there is no plastic-based tapes on the box, though—plastic is bad for bunnies to eat.]

Smart Rabbits If in the presence of a rabbit that needs more mental stimulation than what a simple cardboard tube affords, some toys for human babies may be okay, but the buyer needs to look for small parts that a rambunctious bunny may chew off and swallow.  These infant items are also costly; since the rabbit will likely destroy them, there’s no need to throw good money down the drain.

My wife and I own four rabbits: two Netherland Dwarves, a Mini Satin, and a too-intelligent-for-his-own-good Flemish Giant.

The Flemish Giant is named Regis Philbun.  He spends much time with smaller items, manipulating and moving them around. We purchased a wooden “puzzle box” for him.  This contains four compartments in which treats can be hidden.  Pulling the short rope attached to each drawer-like hiding place reveals the treat inside.

Regis figured this out pretty quickly—now, when the box is loaded and ready for re-use, he simply hops to it, pulling out all the drawers as quickly as he can to devour the goodies inside.

We caught him working on a small round toy that contained beads on a loop.  He moved the beads from one side of the circle and back again.

Thus, inspiration for what follows came.

Build Your Own Toy Rather than spend a lot of money on pre-fab bunny toys a better tack is to engage your own creative juices and come up with something that may keep your furry friend occupied in a fun way.

Watching Regis’ activities with the beaded hoop led me to build what I’m calling the Bunny Abacus.

This is a simple project and takes, at most, 30 minutes to complete.  Because it is easy to do a parent can enlist the aid of a child to “help”, allowing some interaction with children.  However, as power tools are involved, be a good mommy or daddy, and don’t let your kid handle those!

The dowel rod and sliders can be found at arts-and-crafts oriented retailers (such as Ben Franklin).  I bought my materials at Michaels (a chain with locations in the US and Canada). The dowel rods were precut—one can obviously buy a longer piece at any home improvement outlet and cut it to the desired length.  The sliders I chose are actually doughnut-shaped doll stand bases.  My total cash outlay for these two items was less than $5 US.

The first step is prepping the wood to be used for the end pieces of your bunny abacus. I took a length of scrap 2”x4” from my garage and cut two 4” blocks from it.  These were sanded to smoothness, rounding off the corners, and making sure there were no splintery ends.  [Though your bunny will chew on this, splinters and loose slivers are not a good idea—these could get in their paws or eyes.]  Also, make sure the wood you use has not been chemically pressure-treated or has any paint on it: it should be unadorned, dry wood and nothing more.

After the end blocks have been cut and sanded, mark a spot in the center of the block to drill a hole.  Using the appropriate sized drill bit, go about halfway into the block.

Once both end blocks have been sanded and drilled simply add a small amount of the white glue in each hole.  Fit one end of your dowel rod into one block, place a number of “counting beads” on the rod (I used ten, because Regis understands the decimal system), and put the other block in place over the open rod end.

The number of wooden sliders used, regardless of size, when pushed together, should not exceed half the length of the dowel rod.  This gives your fuzzy mathematician some room to slide some or all of them to the other side of the rod unhindered.

Allow the glue in the drilled holes sufficient time to properly set up.  Also, do not paint, stain, or otherwise treat it with a waterproofing agent or polyurethane sealer—these are bad for rabbits. Leave the wood raw.

The completed toy is heavy enough to be stable on the floor of your bunny’s pen, but light enough that he or she can carry it around.  Regis immediately picked his up by the rod’s center and carted it over to a spot a few feet from where I had initially set it down.

He enjoys moving the wooden disks back and forth. He and his best friend, Nancy Bunatra, both like gnawing on the wooden end blocks as well (don’t worry, it won’t hurt ’em).

This project is something I came up with to fill a need in one of our bunny’s lives.  It is not complicated, does not require master carpentry skills, and doesn’t even have to look that finessed when you’re done with it.  The rabbits won’t tell if you didn’t cut your blocks exactly square!

Just have fun with this project . . .

Again, as proof that rabbits are very intelligent and keen to manipulate their environment, my wife and I discovered the following “bunstruction” project on the morning of May 5, 2015 (“Happy Cinco de Mayo!”).

Regis Philbun, again with the help of his gal Friday, Nancy Bunatra, built this tower.  The base is a toddler’s one-piece activity set we bought for them some weeks ago.  [Used, at a yard sale for only $3: I take my own advice about not spending big bucks on bunny toys!]  A wooden food bowl is on top of that, and Regis’ deconstructed “puzzle box” sits atop that as a cap.  Hung on either side of the base are two of the empty puzzle-box drawers with heavy rope pulls placed symmetrically.

The funniest part though, is what’s sitting inside the wooden box on top—we give the rabbits small activity tablets (such as children might enjoy that have pencil-and-paper puzzles, seek-and-find games, etc.) in them.  The bunnies enjoy riffling the pages and tearing the pulp paper.

Regis capped his project with a shred from his puzzle book, setting it in his empty puzzle box: the paper scrap is captioned “I’m Different”.

FINAL UPDATE: It is with sadness beyond description that I must report that our funny, 50-pound, “little” guy, Regis Philbun, died this morning around 9:20 AM, March 14, 2016.  My wife and I are both devastated as Regis was quite the character.  While we may get another Flemish Giant any newer bunny will certainly be nothing like Reege—he was the smartest rabbit I ever owned or met. 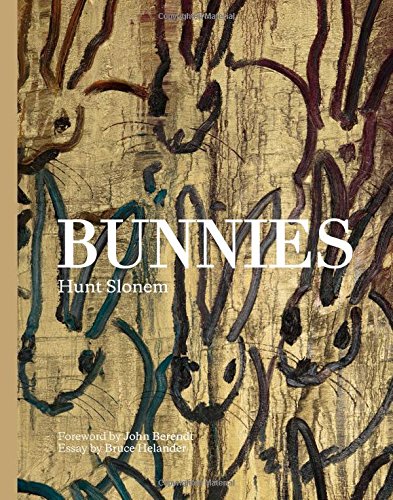 bunnies in a chidren's book 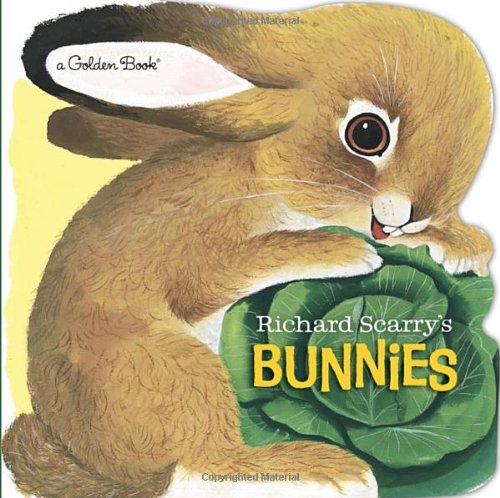 no bunnies in this, though