Building a House in Skyrim

While you journey around in the province of Skyrim, you may find the opportunity to buy a plot of land in which you can build a house. Keep in mind, you will need the Hearthfire Downloadable content from the Xbox Live Marketplace to build houses in Skyrim.

When first released, the DLC was $5. It may have gone down in price or have stayed dormant.

There are a total of three plots of land, each of which you can build a house on. The three plots of land are located in different holds or areas. To buy the land for the house, you'll want to talk to the Jarl or leader of the hold. Each Jarl resides in the main town within the hold.

For example, If you wanted to buy the land for a house in Falkreath hold, you would speak to the Jarl in the town of Falkreath. Then you would go to the land that you had just purchased to begin building Lakeview Manor.

People want to buy or build a house in Skyrim because it makes them feel like they have a type of home base or what have you. It acts as a place where you know nothing is going to sneak up behind you and take your life while you're away from the game. Mainly it is great for storing items you do not want to lose but still want to keep for later.

When you first start arrive at your land, there will be a drafting table, carpenter's workbench, supplies chest, and an anvil. You may notice what they look like in the picture above. You use these objects to interact with and build your house in an empty space near you. Building the house requires natural materials that are found throughout Skyrim or bought from general goods vendors.

The main materials you need to build your house are sawn logs, iron ingots, quarried stone, and clay. The stone and clay are easily mined from nearby deposits. You won't even have to walk 10 feet to find them. The iron ingots are obtained by finding them out in the world or purchasing them from any blacksmith. The same goes for iron ore which smelts into a bar.

As for the sawn logs, the only way to get this material is to buy it from a local mill. There is usually someone running the mill and they will always sell you sawn logs at two hundred gold for every twenty logs.

As you can see in the picture above, it is a house in progress. The foundation is using quarried stone. The pillars are using sawn logs. Eventually it comes to building walls, and roofing.

You need iron for things like doors and furniture inside the house. It is not a major need to have iron but it always helps. Iron is needed for making items such as nails, hinges, iron fittings, and locks. These items contribute when building the interior to your house.

Believe it or not, once you have build your house, which seems more like a cottage, a main hall added to it. Of course this requires even more materials so it might be a good idea to gather them ahead of time.

The picture above shows the back side of the main house. There are sticks in the ground with rope going from each one to the next. This is basically showing you where the main hall will be.

Once you have built the main hall. The house you built from the beginning can actually be remodeled into an entryway. There is an option to build three extra rooms or wings to the house. There are three different types of wings for each side of the house. For example, the east wing can either be an armory, kitchen, or library. And the north wing can either be an alchemy tower, storage room, or trophy room.

That said, there are nine total possible wings. It is up to you what best suits your play style.

Lastly, you can build a cellar under your house. This place can have things like a forge, smelter, and work benches. Plenty of chests and safes can also be placed inside the cellar and throughout the house to store all your items while you're out on your travels in Skyrim. 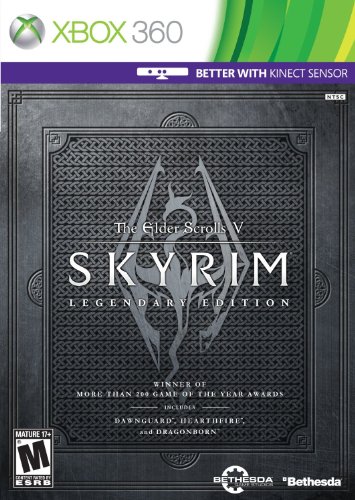 The Elder Scrolls V: Skyrim - Legendary Edition, XBOX 360 Amazon Price: $29.99 Too low to display Buy Now(price as of Oct 2, 2015)
The Skyrim Legendary edition includes the entire game in addition to the DLC's that Bethesda has released: Dragonborn, Hearthfire, and Dawnguard.

Inside the Main Hall