My name is Rose and I am a Canadian freelance writer. I love to tackle human rights issues and anything related to the betterment of society and our planet.  For a sorted directory of my articles: RoseWrites.netboard.me Love to write too? Join me on here on InfoBarrel.
InfoBarrel is a writing platform for non-fiction, reference-based, informative content. Opinions expressed by InfoBarrel writers are their own.
InfoBarrel > Entertainment > Film > Television

I've been waiting for CBS to announce who will be filling in the The Late Late Show time-slot. Are you wondering too?

In a July 24th article by Alex Weprin, he wrote that Craig Ferguson told Larry King he didn't know who should replace him and mentioned, "I don’t think they [CBS] do either, to be fair."[1]

There was some buzz in May that Joel McHale was replacing Craig Ferguson - but this turned out to be based on a photograph of McHale with Julie Chen and Les Moonves, the president of CBS.[2] Joel McHale cleared up the rumour stating he wasn't interested in a late night gig and added, "I'm only funny once a week."[3]

When David Letterman announced his retirement, I scrambled to put together five women and five men who could try to replace Dave. Before I knew it, Stephen Colbert was named as the new host.

"We’re looking at it through a very different lens. There is a knee-jerk reaction to go for a traditional behind the desk format, but we’re looking at the comic world, maybe the political world. We’re keeping an open mind. We’re doing our homework. We want to make the right decision."[4]

One of the first guys to mention he's the man to fill Ferguson's shoes is Norm Macdonald. He began campaigning and there's been over 30,000 tweets recommending him for the job.[5] On Conan O'Brien's show, he performed a live, 1-minute audition which featured Fred Willard (shown next).

Sure. What about Scott Faulconbridge? He's currently touring Canada, but I think he'd also be brilliant. I recently asked him if he'd be interested in hosting a late night talk show and he said:

"Yeah, but hosting a show like that is huge. To be out there night-after-night. Don't know if after 3 months I'd be wanting to do it - but I'd love to work on a show like that."

Up next, Rob Kemp interviews Scott Faulconbridge who says he enjoys stand-up and improv. Mr. Faulconbridge has a wonderful voice for radio or TV. I think he'd be great as a talk show host.

What About Kim Cattrall?

I looked into what she's up to and I doubt she's available. Lucky for us in Canada, Kim Cattrall is starring in a new HBO Canada show Sensitive Skin which premiered July 20th, 2014. Don McKeller directs and stars in the series as well.

Next, CityTV tells us more about what Kim Cattrall and Don McKeller have been working on.

How About a Brian Linehan-type Show?

Brian Linehan hosted City Lights, a one-on-one style interview format which delved into the career of an actor or celebrity on the show. It ran in syndication from 1973 to 1989 in Canada and the US.[6]

Brian Linehan was often lauded by guests as "having done his homework" and they were surprised at how much he knew beforehand. Of course his questions reflected that and I thoroughly enjoyed every City Lights episode I saw. In the late '90s he hosted a show aptly titled Linehan.

Up next is Brian Linehan's 1989 interview with the late John Candy (who starred in Uncle Buck). In 2001, Mr. Linehan was diagnosed with non-Hodgkin's lymphoma and passed away in 2004. It might be hard to find someone with Linehan's talent, but I'd stay up to watch a similar program in The Late Late Show's time-slot.

Bring Back the Show "Comics!"

Or a similar stand-up comedy show

On Monday nights in the '90s I always looked forward to a half hour show simply called Comics![7] It aired on CBC from 1993 - 1999 and it featured one comedian per show. It was produced by Sandra Faire and Joe Bodolai. I was fortunate to be an audience member of the show once.

Up next, enjoy a clip I found on YouTube of Jeremy Hotz. Now this is the type of show that would keep me up to watch CBS after midnight. Warning: Contains some foul language.

Craig Ferguson Is NOT Retiring

He just wants to do something else

Craig Ferguson made it clear that he's not retiring. When asked by Larry King if he'd do another talk show Ferguson replied, "Yeah, I would, but not right away. I would do another one. I just don’t want to do this one anymore."[1]

Interestingly enough, Time writer James Poniewozik (and others) have also made the case for something other than a talk show in the 12:30 time-slot. He reported that viewership for the 11:35 pm shows has been declining over the years and even more dramatically at 12:35.[8]

Some ideas tossed around include:

Up next are a few brilliant skits by Craig Ferguson. Admittedly, I rarely caught his show - but I do know quite a few people who watch him regularly. He's incredibly popular with Canadian audiences.

An Interesting Poll in a Canadian Magazine

Fake Craig is played brilliantly by John Reynolds who works for Ferguson. This is a must-see:

For my UK readers: Craig Ferguson as the Queen

And check out Craig Ferguson (as himself) being

interviewed by the real Larry King:

American on Purpose: The Improbable Adventures of an Unlikely Patriot

American on Purpose: The Improbable Adventures of an Unlikely Patriot 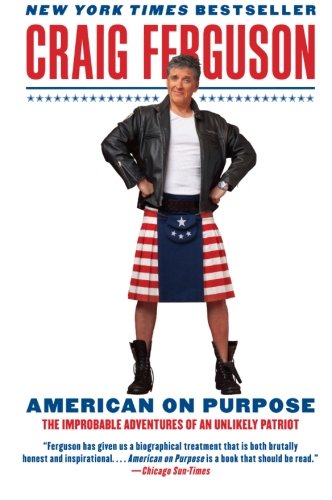 American on Purpose: The Improbable Adventures of an Unlikely Patriot Amazon Price: $14.99 $6.35 Buy Now(price as of Dec 20, 2015)
Now you can have Craig Ferguson (in a kilt) in your bedroom all the time. This book covers his journey from the mean streets of Glasgow, Scotland to the promised land of Hollywood. You might be surprised to learn that Craig was a construction worker, a punk rock musician, a bouncer, and a modern dancer. Fortunately, he overcame a drug and alcohol addiction (which almost led to a suicide attempt). Happily, we'll still be enjoying more of Craig (somehow, somewhere) after The Late Late Show.
Next >> Lifetime Cable Channel Releases Yet Another Tell-All About Marilyn Monroe