I am a retired teacher of English as a second language. I teach on line via Skype, and write on-line articles which reflect my love of travel, language, literature, history and culture. I love writing for InfoBarrel. Why not join me by signing up here: http://www.infobarrel.com/signup.php
InfoBarrel is a writing platform for non-fiction, reference-based, informative content. Opinions expressed by InfoBarrel writers are their own.
InfoBarrel > Environment > Global Warming

Can We Save the World's Coral Reefs?

When I head off to a tropical paradise to escape the northern winter, one activity I look forward to is snorkeling. I have discovered that the best snorkeling is found where there is warm, crystal clear water and a healthy coral reef that supports a teeming fish population.

While I have enjoyed amazing snorkeling around healthy and vibrant coral reefs, I have also snorkeled in murky water where the coral is not so healthy, and I have often been concerned to see garbage floating in the ocean or washing up on shore with the incoming tide. On my last trip to Hawaii I went to a popular snorkeling location and noticed that the coral was colorless. I realized that it was dying, a victim of the impact of thousands of careless human feet.

The Hawaiian coral was being destroyed by anthropogenic, or human caused, environmental impact. But irresponsible snorkellers are only one tiny part of the problem. Farming, fishing, energy production and mining are just some of many human endeavors which may cause harmful changes to the environment. Sadly, these changes often result in the extinction of plant and animal species. Not only have we humans wiped out many species in recent history, from the dodo to the Javan tiger, but we may also have caused the disappearance of large prehistoric mammals such as woolly mammoths and giant sloths.

As anthropogenic extinction continues apace, coral is particularly threatened.  In fact, the US Coral Reef Task Force, which was established by Presidential Order in 1998, warns that 10% of the world’s reefs have been destroyed by human activity, and estimates that another 60% is in danger of meeting the same fate.

Corals reefs are one of the world's most complex and vital ecosystems. In fact, the U.S. Coral Reefs Task Force considers them so crucial that it calls them the "rain forests of the sea". The complexity that makes coral reefs so magnificent is the result of a delicate ecological balance which also makes them particularly sensitive. Too many predator fish, for example, will eat the grazing fish that eat seaweed. If this happens, the seaweed will not be kept in check and may eventually choke the reef on which it grows. 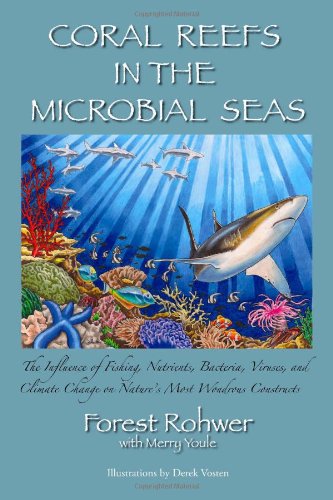 Coral Reefs in the Microbial Seas Amazon Price: $19.95 $13.48 Buy Now(price as of Jun 21, 2016)
Corals obtain the nutrients they need from a symbiotic relationship with photosynthetic algae which convert the energy of sunlight into food. The algae need clear water that will allow sunlight to penetrate. If the water becomes cloudy, the algae will not be able to produce enough nutrients to sustain the coral animals.

One of the most significant threats to a reef is pollution. Corals can be suffocated by plastic bags or poisoned by land-based pollution such as runoff from industry, sewage treatment plants, and agriculture. Other pollutants go directly into the ocean: marine fuel, bilge discharge from boats, dumped aviation fuel, and oil pipeline leaks to name but a few.

Another major threat is sedimentation, which increases the cloudiness of water, and makes it difficult for the coral’s symbiotic algae to carry out photosynthesis. Sedimentation may be caused directly by shoreline construction and dredging. It also increases when inland erosion causes sediment to be washed into rivers and ultimately into the ocean. Human activities which increase inland erosion include logging, construction, mining, and farming along riverbanks.

Many fishing practices are also responsible for harming the reefs. Careless fishermen collecting tropical fish for the aquarium trade are one problem. More serious, however, are harmful fishing practices such as cyanide fishing. In order to capture live fish for either the aquarium or restaurant trade, fishermen knock out the fish by spraying them with cyanide. While the amount of cyanide used does not kill the fish, it is fatal to coral.

There are many other harmful fishing practices. Deep water trawling damages coral when the trawl nets scour the ocean bottom.  Blast fishing uses explosives  to bring fish out into open water, but destroys coral and other species in the process. Muro-ami netting is another method of bring fish out of hiding. No explosives are used, but reefs are pounded with weighted bags, which can also stress the coral. Reefs may also be broken by boat anchors or harmed when fishing nets get caught on them.

Coral is also deliberately destroyed by mining. Small amounts may be chipped away to be used in jewellery, but even greater damage is done when the hard calcium carbonate of the reef is broken out to use for construction.

Coral is also extremely sensitive to changes in ultra violet radiation and water temperature. Depletion of the ozone layer, caused by emissions of freon and CFCs, means that ultra violet radiation levels have increased. In addition, fossil fuel usage has increased the amount of carbon dioxide in the atmosphere, and resulted in warming of both the atmosphere and the ocean. Stressed corals expel their photosynthetic algae, become white or bleached, and ultimately die.

Credit: By oksana (Own work) [CC BY-SA 2.5 it (http://creativecommons.org/licenses/by-sa/2.5/it/deed.en)], via Wikimedia Commons

Much of the carbon dioxide produced by human activity is ultimately absorbed by the ocean, where it forms carbonic acid. As carbon dioxide levels in the atmosphere have increased, so has ocean acidification, which causes the weakening of coral skeletons and the death of photosynthetic algae.

Coastal development is also increasing due to increasing population and economic development, with more dire consequences for coral reefs. The reefs which were once found in the waters off of Honolulu, for example, have been destroyed by construction activities, dredging, pollution, and sedimentation.

Although reefs are threatened by so many factors that their future seems as bleak as a piece of bleached coral, there is hope. The international community is working to protect the world's irreplaceable coral reefs, and public awareness is increasing due to the work of the International Coral Reef Initiative. In a 2008 call to action, the US Coral Reef Task Force observed that reefs have the capacity to heal themselves if they are protected from pollution, harmful fishing practices and the impact of development.

Another positive development is the introduction of coral gardening or coral aquaculture. While coral may be farmed commercially to supply the aquarium trade, coral farming also has great potential as a conservation method. When coral seedlings are transplanted onto a damaged reef, they take root and flourish. As the reef begins to recover, so does the entire reef ecosystem. Declining fish populations rebound and failing fisheries will begin to thrive once more.

Coral farming is helping reefs in the Philippines, the Solomon Islands, Palau, Fiji, the Marshall Islands and Japan.

While these are all positive initiatives with great potential for success,  they do not address the biggest problem. In 2008 at its tenth anniversary meeting in Hawaii, the U.S. Coral Reef Task Force issued an urgent call to action to sustain and restore coral reef ecosystems. At the same time they warned that conservation efforts would only serve to buy time until the issue of greenhouse gas emissions, which lead to oceanic warming and acidification, could be addressed.

Can we save the world's coral reefs? Only time will tell.

Next >> What Happened to the Aral Sea?