Canister Vs Upright -- Which is Best for You?

Choosing between that of an upright and a canister vacuum and working out the advantages and disadvantages to both -- is one of the most commonly asked questions/issues for when it comes to buying a new vacuum-cleaner. Firstly, let's clarify what the distinctive differences between an upright and canister are: an upright vacuum cleaner (like that of the Dyson DC41, see below) is one that you will hold in front of you to vacuum and you will push the handle at about waist height -- whereas a canister (also known as cylinder) vacuum cleaner (like that of the DC39, see below) has a long hose attached which you use to drag behind you.

With the Dyson brand (and many others), the main difference comes in the fact that the canister vacuum's motor is more powerful than that of an upright for instance if we compare that of the DC41 (the most powerful Dyson upright vacuum) to that of the DC39 (the most powerful Dyson Cylinder vacuum) there is a difference of 45 Air watts in favour of the latter (235 and 280 Air watts to the DC41 and DC39 respectively). Therefore, on the average and taking into account a certain balance: the canister vacuum has greater suction (dependent on the vacuum in comparison of course) therefore cleaning out cars, stair ways etc. is easier and more effective with that style of vacuum than with an upright vacuum.

The upright model however pulls at a faster rate, therefore when vacuuming soft flooring such as carpets and hard floors, these are better suited to the upright style of vacuum. However, because Dyson uses basically the same technology (e.g. Radial Root Cyclone Technology, which prevents loss of suction and allows the vacuum to operate on a bagless mechanism) and motors in both the upright and canister style version: it simply comes down to preference over which one you choose to have (as the cleaning suction performance is practically the same).

There is also an additional issue of storage, obviously upright vacuum cleaners are rather tall yet narrow in width whereas the opposite is true for cylinder (canister) based vacuums where although they are compact in height, they are rather wide. Hence, where you would store the vacuum should be taken into consideration e.g. would the cupboard under the stairs be tall enough to store an upright (obviously depends on the specific vacuum in consideration) as well, when deciding what type to get. 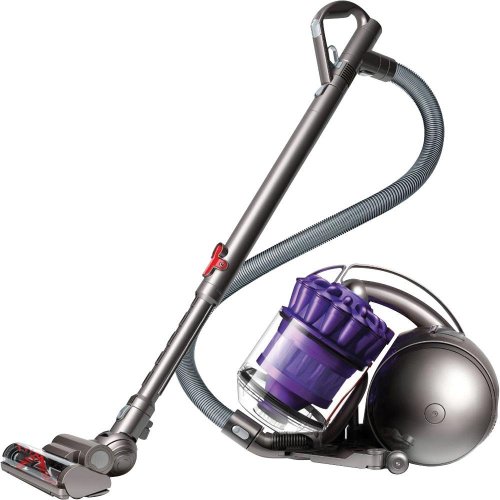 Another point to be aware of is whether it comes with the Dyson ball mechanism -- which you will find implemented in many of the later versions that Dyson has released both for the upright (e.g. DC50, DC41, DC40 etc.) and the cylinder versions (e.g. DC39, DC47, DC49) -- where although I find it personally dramatically improves the manoeuverability of the vacuum (allowing them to turn on a single dime, rather than having to be dragged back and forth). Some people like the rigid four wheeled mechanism as this is what they are used to (Upright: DC33, DC28 and Cylinder: DC38, DC32). Again, a matter of preference.

Conclusion: Which is Best for You?

Still unsure? If you are still not leaning to one over the other it is probably best for you to head down to your local electronic/home gear store and ask to test out both an upright and a cylinder vacuum (perhaps both with and without the Dyson ball mechanism, admittedly it does take some getting used to at first) and see which one you warm to the most (and obviously find easiest to clean with). Moreover, you can ask to borrow a friend's cylinder/upright just to give it a brief trial run and ask what are their experiences with both types. In the end it is simply a matter of what best suits you -- however when concerned with Dyson, the 'overall' cleaning performance (in relative terms i.e dependent on the vacuums in question) it is rather minimal. Hence, focus solely on which one is most comfortable and easiest to use for you.

If you have any questions, comments or concerns regarding this article 'Upright vs Canister vacuums' or about mechanical specifications of any of the Dyson vacuum models mentioned -- then be sure to make them in the comments section below and I will be sure to get back to you as soon as possible.