Capoeira: The Fine Art of Fitness

As a fitness enthusiast, I’m always looking for fun, new ways to stay in shape and Capoeira (pronounced cop-oh-yea-rah) is it. When I discovered this unique workout that combines martial arts, acrobatic dance moves, and high-energy music in a regimen that’s also physically and mentally challenging, I had to learn more.

The roots of this quick and versatile art form dates back more than 500 years when Afrikans were kidnapped and brought to Brazil by the Portuguese. Over two million slaves were forced to work sugar and tobacco plantations under extremely inhumane conditions. In order to survive, they learned to protect themselves by inventing battle moves that would help them achieve this goal. Capoeira was born.

It was dangerous for slaves to openly practice it so they disguised it as a folk dance by incorporating music. In this way, they could continue to instruct each other on how to defend themselves unnoticed and undetected. Slaves also brought their cultures and traditions to the country which were fused with this battle-focused form of survival. Through the fusion of tradition and culture, it became a diverse and crucial self-defense mechanism.

Over time, it evolved into more of a combat-style that equipped escaped slaves for life outside the plantations. This often consisted with living in equally hostile environments as that of their former owners. After slavery, it was banned for about 25 years. Capoeiristas faced arrest, torture, and sometimes mutilation if caught practicing it for any reason. Despite this, the art of Capoeira was still practiced in secret, faraway places.

It was eventually reincarnated by the father of the contemporary sport and the architect of Capoeira Regional, Mestre Bimba, who launched the first school in the 1930’s. He founded the school because he felt the martial art was losing its effectiveness and modern-day participants weren’t practicing it in the same way as their enslaved ancestors. Bimba wanted the sport to return to it’s more combat-style roots. Until he transformed it, the battle moves had become little more than a ritualistic folklore with only nine moves in its repertoire. He developed more movements, designed a method of instruction to enhance learning, and he introduced the ancient African fighting style, Batuque. This is a game he learned from his dad, who mastered the art, that he fused with his regional style.

The object of the game is not to get hit by your opponent. Experienced opponents never even touch each other. If your opponent asks a question with a kick, you answer back by moving your body to avoid it. In the hands of Bimba, it began to gain respectability. Today, it’s used to promote Brazilian culture around the world.

Sown by the seeds of Afrikan slaves, this Afro-Brazilian fighting technique has evolved into a dynamic method of self-defense, a unique art form, and an action-packed fitness tool all set to high tempo music. It has gained respectability around the world because of it’s variety and rich cultural flavor.

There are three types of avenues available to learn this sport:

The sport is male-dominated but more women are taking classes because of the opportunity to get in shape and meet new people. Both men and women attend classes and will sometimes "face off" with each other, as seen in the above photo. But women shouldn’t feel intimidated by this. It’s not about your gender, but your level of fitness, prowess, and expertise. As you can see from the picture above, the female Capoeirista can definitely hold her own against her male opponent. 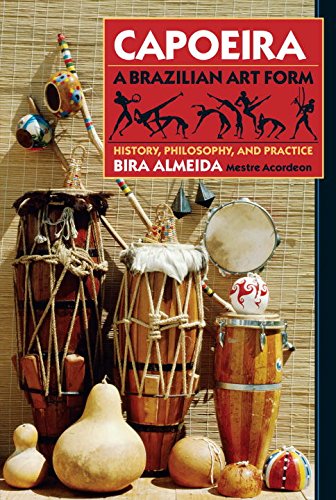 Capoeira: A Brazilian Art Form: History, Philosophy, and Practice Amazon Price: $16.95 $8.83 Buy Now(price as of Dec 8, 2016)
Written by someone who learned the practice and received certification from Mestre Bimba himself, Bira Almeida details his introduction to and immersion in the art of Capoeira.

You don’t have to channel Adonis to learn this sport, either. It’s a practice like any other form of martial art. The more you do it the better you’ll become. Of course, it helps to have a self-defense or gymnastic background but it's not required. After consistent workouts, you will see improvements in your overall fitness level along with increased flexibility, more energy, improved stamina, and endurance.

The key to success with this workout, as with most exercise plans, is to start slow and remain consistent, especially if you haven’t done any physical activity in a while and you’re out of shape. That also means not performing more advanced moves until you have achieved ample physical conditioning.

Another aspect to consider while embarking on this fitness regime is to exercise on a soft canvas and make sure you have someone watching close by as you perform your moves in order to avoid injury. Even though Capoeira is fast-paced at times and involves intricate movements, most beginners can realize phenomenal success with it if they consistently practice the moves and stay safe.

Capoeira is an international phenomenon. There are literally thousands of budding as well as experienced Capoeiristas around the world. This sport continues to grow and has become an avant-garde method of expression through self-defense, rhythm, graceful motion, and skill. If you’re at all interested, find a class near you and take the time to visit and observe it. Then, speak with the instructor and students to get a feel if it’s the right fit for you.

When you decide to join a class, you’ll meet new people, acquire a new language, discover a new culture, and boost your confidence. For all you music lovers, hypnotic, mesmerizing beats are also an integral part of each session and sets the pace for the practice. The rhythms are so engaging you actually forget you’re exercising because you’re having so much fun!

As you can see, this sport combines pulsating tunes, martial arts, and acrobatic dance moves, all in one fabulous, physically and mentally challenging art form. These reasons alone make Capoeira one of the most powerful, exciting, and graceful workouts you’ll ever try.