Thanks for Reading.  You can check out fitness information for those starting their new fitness lifestyles and have zero time to spare here.  zerotimefitness.com If you want to find out how you can write for infobarrel and start earning passive income click here.  Its free and easy to do!
InfoBarrel is a writing platform for non-fiction, reference-based, informative content. Opinions expressed by InfoBarrel writers are their own.
InfoBarrel > Technology > Science > Biology > Animals

Carcharodon carcharias: The Perfect Predator of the Sea

Carcharodon carcharias, also commonly known as the great white shark, odon, white pointer, white death, Tiburon blanco, uptail, or tommy, is possibly the most feared and most legendary creature of the ocean (Ellis 1991).  With its serrated razor sharp teeth, its sleek streamline body and its seemingly effortless movement through the water, it seems a potential candidate for the award of the perfect predator.  Rumour aside, is this shark really just a man eater with the taste for human flesh, or has legend and fear exaggerated the extent of this animal’s blood lust?

The white shark certainly is not confined to any small area of habitat.  In fact, the shark makes its home along the shores of every continent of the world. (Ellis 1991)    These sharks have the outstanding ability to make their homes ranging from temperate, tropical, or polar ocean waters. (Compagno 1984)  The habitat of an individual white shark is also seemingly unrestricted.  Documented transoceanic migrations, such as travels from South Africa to Western Australia and back, have been made by these sharks for speculated, but unsure reasons.  It is thought that these large distant migrations are undertaken due to the presence/absence of food, or for reproduction cycles of the species (Bruce. 2006).

Certain areas are seen as aggregation sites for white sharks during certain time periods of the year for feeding purposes.  All over the world it is noted that the larger specimens can be found gathering near pinniped rookeries in order to take advantage of the reproduction cycles of marine mammals.  Examples of this aggregation can be seen in California waters where these sharks are known to gather around pinniped rookeries during northern autumn and winter when the abundance of immature elephant seals is at its maximum (Bruce 2006).  White sharks also appear to inhabit various depths of the ocean depending on their location and age.  (Bruce 2006) reported that white sharks foraging on teleosts and elasmobranchs in shallow regions swam along the bottom with very few visits to surface waters, while larger mature sharks show near shore vertical behaviour consistent with a strategy for hunting pinnipeds.  The mature sharks rarely visit the surface waters, reflecting the behaviour of looking for silhouettes from below and attacking by surprise (Weng et. al. 2007).

Size related shifts in diet are well documented of the white shark and have been attributed to such factors as decreasing agility with size and changes in tooth morphology (Tricas and McCoster 1984).  Teleosts, smaller sharks, and stingrays are the major prey items reported from white sharks less than 250cm (Ainley et. al. 1985).  This also corresponds with the stomach contents of sharks found in the coastal waters of Southern Australia.  Testing 17 sharks, the prey consisted of cetaceans (dolphins in all cases) and cephalopods (44% and 33% respectively), teleosts (22%), elasmobranchs (22%), crustaceans (22%), pinnipeds(11%), and sea birds (11%).  Teleost remains were found only in sharks less than 220cm, crustaceans and elasmobranchs in sharks 280-310cm, and, in three out of four cases, cetacean remains in sharks greater than 320cm. Pinniped remains were reported from a 245cm shark (Bruce 2006).  This evidence of stomach content also suggests that marine mammals become more prominent in the diet of larger, mature sharks.

While the hunting patterns of large sharks demonstrate a deep water strategy, white sharks demonstrate a much different approach when they are traveling far from coastal waters.  Studies carried out by following tagged sharks for long durations of time show that during migratory phases of these sharks, 57% of their time is spent shallower than 5 meters deep, but also took infrequent dives to 736 meters and spent roughly 15% of their time deeper than 300 meters.  This strategy is seen to be consistent with foraging for larger fish species in open waters (Weng et. al. 2006).

While the feeding patterns and distribution of Carcharodon carcharias can be complex, it is not always because of feeding purposes that these predators will leave an area.  Although many consider them the most dangerous thing in the ocean, on occasion, white sharks may depart an area for safety reasons.  Predator avoidance is another reason why whites may quickly disperse from an area and travel great distances.  After an orca whale (Orcinus orca) killed a large prey item, believed to be a great white shark, off the Farallones coast of California in November of 2000, no white sharks, attacks on pinnipeds, or interactions with decoys were observed again until late December.  While unpublished data confirms these attacks, tagged sharks in the area averaging depths of 77 meters until the day of the attack dove to depths of 484 meters and left the shelf waters of the area.  The shark then proceeded to travel west until it reached the main Hawaiian Islands (Weng et. al. 2006)

White sharks are one of the largest predatory species to hunt mammals ever to roam the earth (Ellis 1991).  Acceptable sizes of this predator species can easily reach sizes of 20 feet in length or more.  White sharks can have a lifespan of over 30 years, and reach sexual maturity around the age of 15 years old.  Male sharks reach maturity at roughly 3.6 meters in length, while females reach sexual maturity at roughly 5 meters in length (Francis 1996).  Female sharks are generally larger in size at than their male counterpart which may be due to stresses of reproduction.   Very little information is known about the reproduction strategies of the great white shark.  Since the species spends its life underwater and out of the sight of humans, birth has never been observed.

Great white sharks are ovoviviparous, which means they are an egg developing species with hatching occurring in the uterus with continued development.  While in the womb, shark pups partake in intrauterine-cannibalism in which the stronger offspring consume the weaker ones before birth.

During the collection of sharks trapped in fishing nets along Southern Australia, ten female sharks ranging in size from 186 to 520cm were captured.  Three of these sharks were greater than 300cm (321, 417, and 520cm).  These three sharks were then placed under close examination and had their reproduction tracts assessed.  All three of these sharks were judged to be virgins based on the presence of a hymen sealing over the vaginal opening.  Ovaries were not visible macroscopically in either specimen (Stevens 1983).  These details give insight to the size of sexual maturity suggesting an occurrence after 520cm in length.   Other captures produced a 420cm female who was reported to have contained 11 well developed pups approximately 60cm in length.  While hauling the captured shark aboard, two pups fell into the water.  Out of the remaining nine pups, one died on deck and the others were returned live to the sea (Bruce 2006).  This suggests that sexual development varies greatly among individual females and also suggests that birth sizes of pups must be somewhere around the length of 60cm.

Offshore focal areas found offshore occurring in low productivity areas are thought to be regions used for foraging, mating, or parturition.  Also, when congregating in high productivity near shore such as the Farallones off the coast of California, it is shown that females depart the area later than males even though they both have similar arrival times.  This is consistent with the higher energy demand for females potentially a need for greater caloric intake for development (Weng et. al.).

While there is much to be learned about this so called man killer, it does not live up to the gross misunderstanding so many have labelled it with.  It is clear that this shark has many other food preferences besides that of human flesh, making attacks quite a rare occurrence.  Like most other creatures, the great white shark in all of its ferocity, has more to fear from us than we do of them.  In order to coexist with these creatures, we need not to fear them, but to gain an understanding of their lives and to respect them for what they really are.

For information on the top reasons sharks have horrible misconceptions to their name, click here

Francis MP (1996). Observations on a pregnant white shark with a review of reproductive biology. Pp 157-172 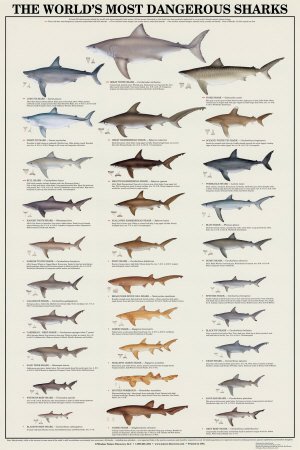 World's Most Dangerous Sharks Art Poster Print, 24x36Amazon Price: $24.99 Buy Now(price as of Jul 16, 2013)
Next >> Zika: The Warnings About Wolbachia and Culex Our Health Authorities are Ignoring